One can also see this as a coming of age for the BJP's ideological mentor.

It has been an organisation shrouded in intrigue and mystery.

The rare occasion you hear from it is when its Sarsanghchalak or chief addresses the cadre on the occasion of Vijaya Dashami annually, broadcast live on news channels in recent years.

So, when the Rashtriya Swayamsevak Sangh announced its first public event open to non-RSS members, it expectedly generated much interest.

The three-day lecture series 'Bharat of Future: An RSS Perspective', to be held in New Delhi from September 17-19, is a first since the organisation’s inception in 1925. The RSS invited prominent persons from various walks of life, including foreign missions, business, sports, entertainment, social sector, retired bureaucrats, retired armed forces personnel, religious charitable organisations and media, among others.

However, there is no complete clarity on the political class that has been purportedly invited to this mega event. Both sides (the 'alleged host' and the 'alleged guests') are absolutely tightlipped. But when questioned, several of them, like Akhilesh Yadav, Tejaswi Yadav and Asaduddin Owaisi, said they will not accept an invitation from the RSS. Who's invited? No one is ready to speak up on this controversial issue. (Photo: India Today)

Additionally, ask an RSS functionary, if Congress President Rahul Gandhi has received an invitation, as was being indicated by Sangh sources earlier, you are asked to change the subject with a muted laugh.

But apparently, you don’t need a confirmation when the joint general secretary of the outfit made it amply clear in an article four days before the event what he thinks of the Congress leader. Tearing apart Rahul Gandhi for recently likening the right-wing outfit to the Sunni Islamist organisation, the Muslim Brotherhood, accused of terror activities by several nations, Manmohan Vaidya wrote, "His (Rahul Gandhi) political advisers have succeeded in convincing him that criticising the RSS will yield political dividends, and that baseless and provocative statements will compensate for the lack of ground work that is required to lift the grand old party out of its political misfortunes."

Vaidya added, "Muslim Brotherhood wants to bring the Shariat state everywhere, whereas the Sangh stands for a Hindu Rashtra that is based on the ideal of spreading universal acceptance, as propagated by Swami Vivekananda."

Announcing the lecture series in a press conference on August 27, RSS All India Prachar Pramukh, Arun Kumar, said, “Today, Bharat is moving ahead towards regaining her special and unique position in the world among the galaxy of nations. At the same time, RSS is realising that there is a growing eagerness amongst larger sections of the society, including intellectuals, and the youth, to know the RSS perspective on various issues of national importance."

RSS functionary and BJP MP Rakesh Sinha told me, "There are two kinds of critics of the Sangh: arrogant and innocent. The former believe they know everything about the RSS and they disagree — the latter are unaware of the RSS' activities and yet, discriminate against it".

What the RSS won't however tell you is that there may also be a need now to battle any misperception about the Hindutva organisation.

With the RSS' political acolyte, the Bharatiya Janata Party's ascension to power in 2014 and its growing tentacles across state Assemblies, the spotlight has been sharply on the RSS and its influence.

It has made the right-wing organisation a favourite punching bag of the Opposition too that targets the outfit every time it puts the BJP on the mat. The intrigue around the organisation hasn’t helped the case either.

The RSS though would rather see that ‘intrigue’ in a positive light and defend it as ‘curiosity’ to learn more about the organisation that has compelled it to hold this lecture series.

Akhilesh Yadav and Asaduddin Owaisi said they would not accept an invitation from the RSS.

"We consider this as a communication with the nation through media", RSS sources say. One can also see this as a coming of age for the BJP's ideological mentor.

At a time when it wants to target the youth, greater communication is the only key.

The RSS has also seen the benefits of modern technologies in broad-basing its reach. By its own account, since it opened up volunteering lines via the worldwide web in 2012, five lakh persons have joined in the five years since.

Most of them, the RSS says, are young and well-educated. Interestingly, it notes that out of the new entrants, about 10 to 15 per cent are women. It feels the need to highlight this gender data because the RSS has mostly attracted only male participation and is widely viewed as a patriarchal and male-dominated organisation, with little or no role of women within. Besides the youth of the nation, the RSS needs to reach the people who matter too. 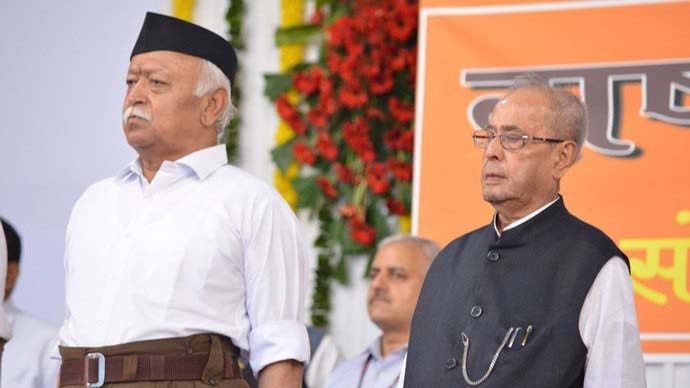 Come to the party: The RSS is known to invite its critics. (Photo: India Today)

The intelligentsia, considered to be influencers on social media and otherwise, have not been part of the traditional RSS volunteer bank. It is them the RSS hopes to impress through this programme. The outfit says that when it opens its doors on Monday, it expects 700-750 guests to grace Delhi's Vigyan Bhawan. With only seven months to go for the general elections, every move counts, especially with the 'mahagathbandhan' of the opposition parties posing a stiff challenge to the BJP. Speaking of 'mahagathbandhan', in the absence of clarity over which political leaders have been invited for the lecture series, the RSS stands to gain both ways.

On one hand, it appears more democratic in its approach when it invites adversaries — if they do a no-show, the RSS has nothing to lose.

In fact, it would've made its point that unlike popular perception, the right-wing outfit isn't the one to be blamed for being 'intolerant' of other ideologies and views.

Recently, in June, the RSS made quite a splash when it invited former President and Congress veteran Pranab Mukherjee to address its new cadre at the valedictory function of the organisation’s ‘Sangh Shiksha Varg’ in Nagpur. But, game plans aside, the RSS' willingness to embrace contrarian views has stood somewhat exposed with what Manmohan Vaidya wrote in his September 13 article on a web portal.

The RSS sah-sarkaryavah said, "Apart from the BJP, most political parties reflect communist influence in their intellectual cell in varying degrees. Hence, we find that for short-sighted political gains, there is a tendency to side with attempts (inspired by leftist ideology) of breaking or weakening the unity of the people of the country, and at the same time opposing national ideas and forces. This enervating influence over the past few decades has left the Congress in a strange condition, almost as if its body is but a shell that is now occupied by a Maoist soul.”

Finally, adversarial or congenial, the RSS has certainly opened its doors and there'll be many who'll want a toe in, given the enigma the Hindu nationalist organisation has been — and the significant role it will continue to play in the BJP's future run in New Delhi.

Also read: Why Rahul Gandhi is wrong in comparing RSS to the Muslim Brotherhood