How Pranab Mukherjee pleased the RSS

The former president's Nagpur speech was just a big farce. It only legitimised the RSS, its communal history and its divisive present

A naïve shock and outrage had taken over the public discourse in India after it was confirmed that former President of India, Pranab Mukherjee, will be the chief guest and speaker at the convocation ceremony of the Rashtriya Swayamsevak Sangh (RSS) at the organisation’s headquarters in Nagpur. While many in Pranab’s party, the Indian National Congress, openly objected to his acceptance of the RSS invite, many others were more than willing to give the veteran Congressman the benefit of doubt, and asked the detractors to hold their horses until he actually speaks.

The RSS today is a hundred-year-old right-wing organisation, drawing its inspiration from pre-Second World War European fascism, and openly declaring its admiration for somebody like Adolf Hitler. Since and before India’s independence, the RSS has been accused of its role in the assassination of Mahatma Gandhi, its participation in numerous communal riots targeted against Muslims and other minorities, and its dogged commitment to the idea of a majoritarian and non-secular Hindu Rashtra.

It was naïve to expect an organisation as guarded and closed as the RSS to engage in any public and widely televised debate or discussion on what it stands for. Why would the RSS accept any ideological disruption at one of its main annual events? Most importantly, what credentials does Pranab Mukherjee hold for anybody to expect that he would go to Nagpur to reprimand the RSS for what it has been doing in India for almost a century now?

Therefore, the so-called irony behind a die-hard leader of the Congress, with its dubious record on communalism, legitimising the RSS did not surprise many at all. After all, family members of former Prime Minister Lal Bahadur Shastri and Netaji Subhas Chandra Bose were also in the audience. Is it too far-fetched to say the RSS, more powerful than ever with its political wing, the BJP, now ruling over two-thirds of India’s population including at the Centre, is now encouraging an open ganging-up of India’s Hindus against its minorities, especially Muslims? 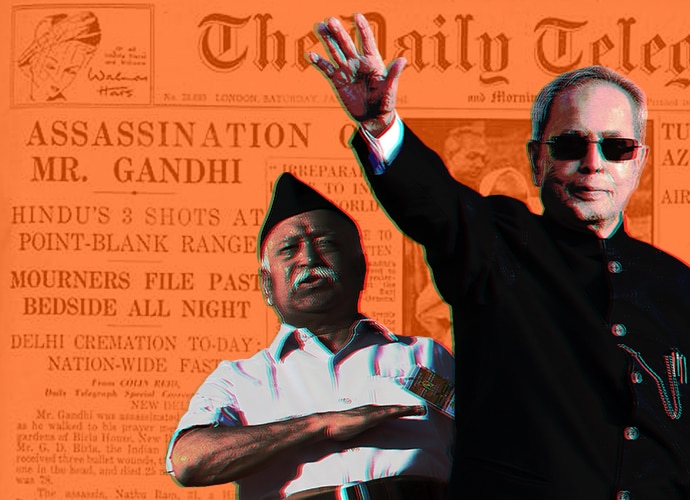 As nearly 180 million Muslims across India broke their Ramzan fast on the evening of Thursday (June 7), they saw, with anxiety if not dismay, a former President of India call the RSS founder Keshav Baliram Hedgewar "a great son of Mother India" and paying his tributes to its ideologue Madhav Sadashiv Golwalkar. They saw a former head of state narrating, in flowery words interspersed with the words of poets and historians, the long, glorious and assimilative history of India, until he hit the 12th century. In a deliberate erasure, he only spoke the word “Muslim” twice, almost in the same sentence, and chose to ignore Mughal rule when he presented India’s timeline.

With that erasure, his decision to please his hosts was more than evident.

Whatever Pranab Mukherjee did for the next 20 minutes, the most part of which he spent talking on India’s pluralism and primacy of the Constitution, did little to rescue the optics around the event. It was the first time a graduating ceremony of the secretive RSS was nationally televised. The Sangh chief, Mohan Bhagwat, also got primetime attention for 40 minutes, in which he clearly and in no ambiguous terms reiterated the xenophobic and Hindu Rashtra-centric RSS worldview. Even if one argues that Mukherjee’s speech was more aimed at lecturing the RSS than the nation from its pulpit, he cannot get away from the accusation that he crossed a certain Lakshman rekha in India’s public life, especially at a time when the threat to India’s many minorities is at its peak.

Who is to say the BJP will not feel a shot in its arm with a veteran Congressman legitimising its mentor, the RSS, as a mainstream nationalist organisation?

And what an amorphous and empty lecture was delivered.

It was a tried-and-tested bureaucratic speech that is a staple on the eve of India’s national events, or delivered in government schools and colleges. Did Pranab call out the RSS for mentoring a range of right-wing organisations, including the Vishwa Hindu Parishad and Bajrang Dal, for their incessant violence against and demonisation of India’s minorities? Did he reprimand Bhagwat for repeatedly calling India "a Hindu nation", or for mentoring a party that refuses to give Muslims a ticket in elections? Did he question the mandate the RSS has got to hold reviews of the Narendra Modi government, when it is not a constitutional body? Did he cringe when the saffron flag of the RSS was saluted by the crowd? Did he wonder why the national anthem was not played or no tricolour hoisted? Worse still, did Mukherjee even once acknowledge the elephant in the sprawling Nagpur ground: the role of the RSS in fomenting the politics of hatred and majoritarianism in India?

Was Pranab Mukherjee being a grudging politician for being ignored by his Congress party twice for the prime ministership, and therefore, using the RSS invite to assert he is still a political player? This is something that will be left to speculation. But he cannot escape the allegation that he has only ended up pushing the RSS more to the centre stage of India’s mainstream politics. And that the entire affair in Nagpur today was played out on the terms of the RSS, not his.

Pranab Mukherjee’s acceptance of the RSS invite was a tragedy.

His speech, which will clearly be lost on the RSS, was the big farce.

No prizes for guessing who won at the end of the long Thursday evening.

Post your comment
#Muslims in India, #Hindutva, #RSS, #Pranab Mukherjee
The views and opinions expressed in this article are those of the authors and do not necessarily reflect the official policy or position of DailyO.in or the India Today Group. The writers are solely responsible for any claims arising out of the contents of this article.