If India really wants to fight the onslaught of Hindutva, it needs to break free of quasi-liberal, pretentious and hallowed discourses about inherent tolerance.

The news that former president Pranab Mukherjee has accepted an invite to address a function at the RSS headquarters in Nagpur on June 7 has opened the floodgates to extreme reactions.

While the Congress party is clearly taken by surprise and is still grappling for a coherent response, senior party leaders have been suggesting Citizen Mukherjee — as he calls himself on Twitter — to remind the RSS of what’s wrong with its ideologies, and the inherent tolerance and secular nature of India society.

The BJP, meanwhile, has welcomed it as a good beginning. Senior cabinet minister Nitin Gadkari noted, “Mukherjee's acceptance of the invitation is a good start. Political untouchability is not good." He added that the RSS was not Pakistan's ISI but an organisation of nationalists. 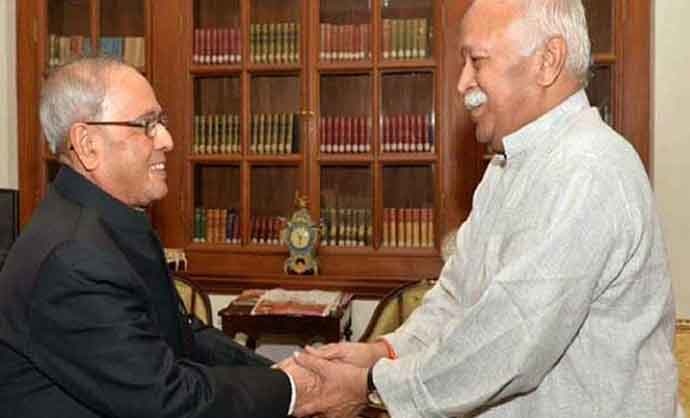 Reminding India of its ‘core values’

Mukherjee, an astute politician, was Congress' all-season troubleshooter during the UPA rule. He was the party’s perennial PM-in-waiting, like BJP’s LK Advani, before Sonia Gandhi decided to nominate him for the post of the president in 2012.

Describing his thoughts after a meeting with Sonia Gandhi before he became the President in his book, The Coalition Years, Mukherjee wrote, “I returned with a vague impression that she might wish to consider Manmohan Singh as the UPA presidential nominee. I thought that if she selected Singh for the presidential office, she may choose me as the prime minister.”

As president, he carried himself with dignity and did not shy away from acting as the conscience-keeper of the “core values” of Indian civilisation and its democracy, by indirectly reminding the BJP-led NDA government and rabid Hindutva forces of what India stands for.

Speaking in his home state of West Bengal in October 2015, days after Mohammad Akhlaq was lynched in Dadri, Mukherjee had said that "our collective strength” must “be harnessed to resist evil powers in society". He had further reminded, “Humanism and pluralism should not be abandoned under any circumstance… assimilation through receiving is a characteristic of the Indian society.”

During a book launch in the same month, he had further said, “Hate speech and fear mongering should come to an end. Our values should become part of our daily life. We must amplify the voice of moderation. We should not permit religion to be used as a mask to satisfy hunger for power and control of some individuals.”

It is likely that the former president will make similar sweeping statements about the "core values" that India stands for, Gandhian philosophy, etc, without directly admonishing the Sangh parivar in his upcoming speech in Nagpur.

Reactions to the news on social media have also been extreme. Many are sharing memes calling Mukherjee another sympathiser of the Hindutva forces. Several others find nothing wrong in it, suggesting that debate and discussions with divergent ideologies are hallmark of matured democracy.

Senior journalist Rajdeep Sardesai suggested, “Can RSS be untouchable in an age when the PM is a pracharak?” He also speculated, “What if he goes there and lambasts RSS’s vision of a Hindu Rashtra as he should.”

Pranab Mukherjee accepts invite to address an RSS gathering; next thing you know we have prime time news debating 'Pranab with RSS'! Can RSS be untouchable in an age when the PM is a pracharak?! What if he goes there and lambasts RSS's vision of a Hindu Rashtra as he should!

Mukherjee’s visit will certainly help the RSS as it will make the Sangh parivar appear more acceptable. This vexed instance though is another manifestation of how right-wing Hindutva politics has gradually been normalised in India although fence-sitters continue to pretend that all is well unless of course they are directly trolled or face backlash.

At a time when the president, the vice-president, the prime minister and host of other central ministers, chief ministers and governors are former RSS pracharaks, the Sangh parivar must be given its dues for the right-wing shift in politics.

Something is surely rotten in the secular-liberal fabric of this country even as some right-wing intellectuals, including Arun Shourie, appear to be sane and reasonable. People like him and Yashwant Sinha were ministers in the Atal Bihari Vajpayee government and had no qualms about the Babri Masjid demolition, or 2002 Gujarat riots. They are now speaking only because the current BJP dispensation has sidelined them.

We certainly live in bleak times when liberal journalists praise  DV Savarkar as “decisive but heroic”, and columns appear praising the Advani-Vajpayee era to show the contrast with the current government.

135th birth anniv of Savarkar: freedom fighter, patriot, writer, Hindutva nationalist.. divisive but heroic.. do pay a visit to his cell in Port Blair to realise how our freedom fighters were tortured.. #Savarkar

To be fair, in this age of anger and xenophobia, right-wing political forces are on the rise across the globe, even in countries that have long prided themselves in liberal democratic values — the victory of Donald Trump in the United States and the continuing popularity of Recep Tayyip Erdogan in Turkey are only extreme examples. Even in the United Kingdom and Germany, the current coalition governments were formed with the support of rightist parties.

What makes India’s case different though is that unlike in the West, where Muslim migrants who have been otherised are fairly new diaspora population and very small in number, in India the vast majority of Muslims are but natives whose forefathers accepted Islam, in some case, centuries ago.

Even the small percentage of so-called "ashraf" Muslims like Syed, Sheikh, Turks and Pathans who have origins in Persia or Central Asia are those whose forefathers settled in India at least two centuries ago, in many case five centuries back. India, hence, cannot be compared to western concepts of “melting pot” or “salad bowl”.

There is nothing new in deep-seated prejudices against marginalised communities, particularly Adivasis, Dalits and Muslims. What is fast becoming the new normal, however, is that hatred is being practically institutionalised while the educated middle class liberals continue be either fence-sitters or gradually shedding their inhibitions towards Hindutva.

The virtual impunity that the right-wing mob has been given for short-term gains will harm the Indian society adversely in long terms.

Liberal values are facing strenuous pressure from the Hindutva ideological forces. It is hence pertinent to look within and question the general understanding of secularism and tolerance of the Indian society taken for granted.

In a recently published book, Religion as Critique, anthropologist Irfan Ahmad posed some unsettling questions critiquing professor Amartya Sen’s The Argumentative Indian and other contemporary scholars. He observes, “Figure of the Muslim as 'other' is integral to Roy’s, and India’s liberalism, as it is to Western liberalism, a child of the enlightenment ‘shot through Islamophobia’.”

Describing writers and critics of Urdu literature, primarily Shamsur Rahman Faruqi and Gopichand Narang, he further added, "Whatever the difference between Faruqi and Narang might be on other issues, the nationalisation of poetry and externalisation of Islam make them intimately united."

It stems from generally accepted opinion about India/Hindus peddled by seculars, liberals and leftists as inherently tolerant and otherwise great that was sullied only by foreign invasions of Muslims — even hardening of caste system happened during the Muslim rule in middle ages, according to this narrative.

Turn around and most of the media you watch on TV, or read in newspapers have internalised this narrative. Even those who claim to represent Muslims. When some khap panchayat decides to flog a girl for her choice, it’ is hence described as “Talibani diktat”, and even well-meaning liberals lament that if Hindutva is not stopped, India will turn into “Hindu Pakistan”.

Talking about Hindutva, or Hindu nationalism, only in the context of the RSS and its several offshoots, tells only half the story of India. We often ignore the soft-Hindutva of not just the Congress party, but even other regional parties while focussing too much on purported “minority appeasement” despite the fact that Muslims remain one of the most-backward communities and face sporadic violent backlashes.

Moreover, the role of chest-thumping liberals, both Hindus and Muslims, who give sermons on how Indian institutions and its core values are strong and vibrant enough to absorb all kinds of pressure, are equally gullible.

To be clear, most of these liberals do not support rabid communal violence against Dalits and Muslims and are most vocal in condemning them as well. Rajdeep Sardesai, for example, still faces backlash from Hindutva trolls for being too critical of Modi as Gujarat CM and particularly for his coverage of the 2002 carnage.

But a bad cocktail of nationalism and Hindu chauvinism — add to it the belief in liberal economic system that will presumably make India a truly developed economy — surely supersedes other visions.

Sardesai, in fact, did not shy away from showing his caste “Saraswat pride” when two senior politicians belonging to same community — Suresh Prabhu and Manohar Parrikar — were made cabinet ministers in November 2014. He added later, "Proud GSB, proud Goan, proud Indian. No contradiction." This contradiction exists for Muslims after all, who are often asked if you are Muslim first or Indian first.

Liberal Hindus do write on the plight of Muslims, but their tone is often patronising and they suffer from implicit bias they do not even realise. Historian Ramchandra Guha, for example, compares veil with trishul and talks of liberating Muslim women in the same way western colonisers have been speaking for centuries.

Surely, it is not just the Partition that makes large number of Hindus hate Muslims so much. While the blame of Partition has squarely been shifted to the Muslims, it is time we also probe the role of the senior Congress and Hindu Mahasabha leaders, as also intellectuals of the 19th and 20th centuries for otherising and vilifying Muslims in literature and popular narratives, influenced largely by colonial discourses.

Few years ago, journalist and author Ajaz Ashraf had described senior journalist Shekhar Gupta as "right-wing secular", while reviewing his book. The term can now safely be extended to include many of those who would otherwise like to describe themselves as realists, pragmatics, even secular-liberal.

If India really wants to fight the onslaught of Hindutva head on, it needs to break free of quasi-liberal, pretentious and hallowed hegemonic discourses about inherent tolerance and liberal values, and become more inclusive and pluralistic in the true sense, shedding its implicit biases.

#Hindutva, #Nagpur, #RSS, #Pranab Mukherjee
The views and opinions expressed in this article are those of the authors and do not necessarily reflect the official policy or position of DailyO.in or the India Today Group. The writers are solely responsible for any claims arising out of the contents of this article.