Over the last two decades, the partnership has grown steadily, with no major political differences darkening the sky between Paris and Delhi.

It is not easy to guess in advance how successful will be the visit of the head of a state in another country; there is, however, no doubt that the forthcoming visit of President Emmanuel Macron of France will be the opposite of Justin Trudeau’s, the Canadian prime minister, and this for many reasons.

First, the French President and his charismatic wife will certainly not waste their time parading around religious places or bringing along known separatists. But more importantly, the Indo-French relations are based on a twenty-year-old strategic partnership signed by the former French President Jacques Chirac and then Indian Prime Minister, Vajpayee; the latter then declared: “Both countries share a perspective that the new world order has to be a genuine multi-polar world order. Our bilateral relationship is poised to grow in the coming months in a multifaceted manner.”

Over the last two decades, the partnership has grown steadily, with no major political differences darkening the sky between Paris and Delhi. France has constantly been supportive of India, particularly for a permanent seat at the UN Security Council and has shown more comprehension than others in the nuclear domain. Though in recent years, the term "strategic partnership" has been devalued by the multiplication of such accords with all and sundry, in the Indo-French case, the 1998 momentum has been regularly sustained by new initiatives.

Then in September 2016, there was the Rs 59,000 crore deal for 36 Rafale fighters; though criticised by some political parties, it will soon prove to be a game changer, especially due the offset clauses. But there is more.

In October 2017, in an interview, the French defence minister Florence Parly stated that she had come to Delhi because India is "our major strategic partner in Asia". She noted that the relationship was “the fruit of a long, shared history, grounded in an unshakable trust,” adding “our partnership is continuing to develop even more, including in very sensitive areas.”

These "sensitive" areas make the difference. Macron’s visit was delayed for a few months due to the importance of an important joint initiative, the International Solar Alliance (ISA). Launched at the UN Climate Change Conference in Paris in November 2015, the ISA wants to create a coalition of solar resource-rich countries and address each participant’s special energy needs.

On January 25, 2016, the ISA’s interim Secretariat was inaugurated at the National Institute of Solar Energy (NISE) in Gurgaon by Modi and Hollande. A total of 56 countries have now signed the ISA Framework Agreement and 26 nations have ratified it. The ISA founding conference, co-hosted by India and France, will take place on March 11 at the Rashtrapati Bhavan.

It was significant that the French defence minister travelled to Nagpur to launch a joint production facility between Dassault Aviation and Reliance to fulfill the Rafale deal’s offset obligation. Around Rs 20,000 crores need to be invested by the French. Madame Parly, along with Dassault Aviation chairman Eric Trappier and Reliance chairman Anil Ambani, laid the foundation stone of an aerospace park for the manufacture of aircraft components. 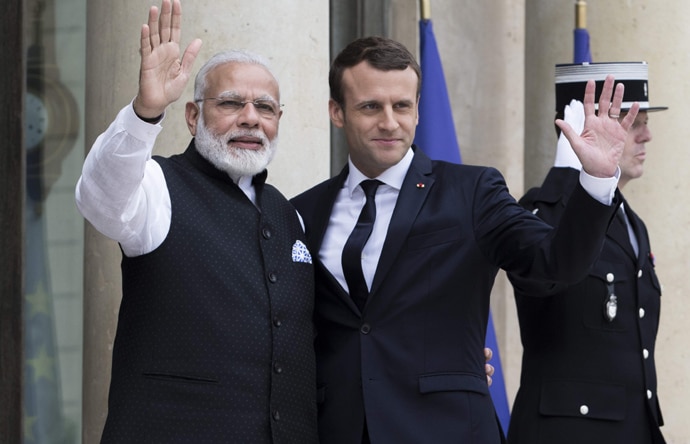 The Dassault–Reliance Joint Venture (JV) has already shortlisted a large number of vendors, mostly small and medium-sized enterprises, to be part of an indigenous supply chain for the Rafales; in other words, the "Make in India" programme.

During the forthcoming presidential visit, a deal should be signed between India and Safran (one of the partners of Dassault in the Rafale deal) to develop an M88 engine for the Light Combat Aircraft (LCA) Tejas. A report in The Tribune recently hinted that “the M88 engine would be used as the base engine to adapt it for the LCA programme or it would be an altogether new development using Safran technology to create a new engine from the ground upwards.” Safran has now offered to collaborate on the Kaveri engine programme as part of the 50 per cent offsets for the Rafale deal.

Another highpoint of Macron’s visit could be a logistics accord allowing India access to the strategically important French base in the Reunion Islands near Madagascar. Another possibility is the opening of the French facilities in Djibouti in the Horn of Africa where India’s rival China has already a military base. This is part of India’s new maritime strategy.

It might also make economic and strategic sense for India to partner with France in more futuristic research projects like a fifth-generation combat plane or an armed drone. It might not be for this visit.

#Defence, #Bilateral Ties, #Justin Trudeau, #Emmanuel Macron
The views and opinions expressed in this article are those of the authors and do not necessarily reflect the official policy or position of DailyO.in or the India Today Group. The writers are solely responsible for any claims arising out of the contents of this article.