Headed by Acharya Yogendra Arya, this is an organised and well-run establishment.

The road to Jind is long, winding, dusty and hot. Especially in the month of May. It didn’t help that there was a forecast for a terrible storm. Bad weather, gau rakshaks and a delayed departure from Delhi made this a trip of trepidation.

Jind is three hours from New Delhi; although, if you try to check in on Facebook, it is described as the “heart of Haryana”. Looking around the dry expanse of land with some nondescript buildings, it’s hard to understand the description. 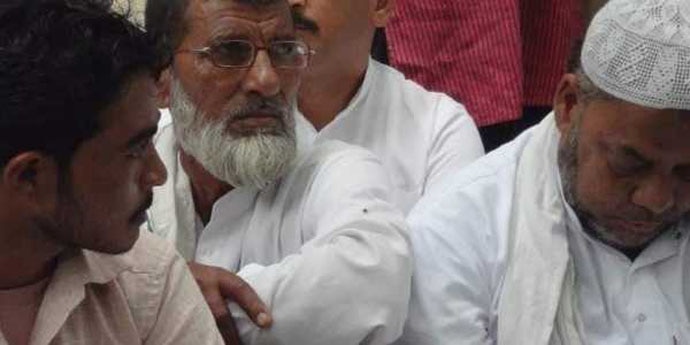 Consumed by hate: From left, Irshad, the son of Pehlu Khan, killed by gau rakshaks in Alwar, and the father of Junaid Khan, lynched on a train. Photo: PTI

Perhaps because it’s at the very centre of Haryana, perhaps it’s thought process. This is where the headquarters of the Haryana gau rakshaks is housed. They have two buildings, one houses the gaushala (cow shelter), and the other the office and some living quarters.

Headed by Acharya Yogendra Arya, this is an organised and well-run establishment. The Acharya wears white and a serene expression, is clean-shaven and soft-spoken. His unhurried manner and gentle smile are in direct contrast to the large looming young men who accompany him and never smile, or twitch, or even make eye contact.

The acharya sits in front of the logo of the Haryana Gau Raksha Dal, which has as its symbol a cow and two guns crossed over its head. It appears as if the guns are weighing down the cow while protecting it.

In a manner akin to what I imagined was the tone of the saints of yore, the acharya spoke at length about his love for the “mother cow”: “Our vedas describe her as a mother. As a creature who has to be protected and revered.”

And then he adds: “She is our mother and so we will kill for her.”

I asked him how they kill people and protect cows. The Acharya smiled: “We have guns and our boys are trained. And we have armoured cars too. They will show it to you later.”

So who trains your “boys”?

“The home guard trains them, and then they get real-time practice when we go to the field by shooting at the cow “smugglers”. And we get licences for our guns from the administration. Unlike them – they don’t have licences.”

Without being asked, he said: “It really hurt our feelings that Modi (once again no PM, no Mr, no mark of respect) called us lumpen elements – I want to ask him how he can think we are goondas when we are working with the police and the administration.” 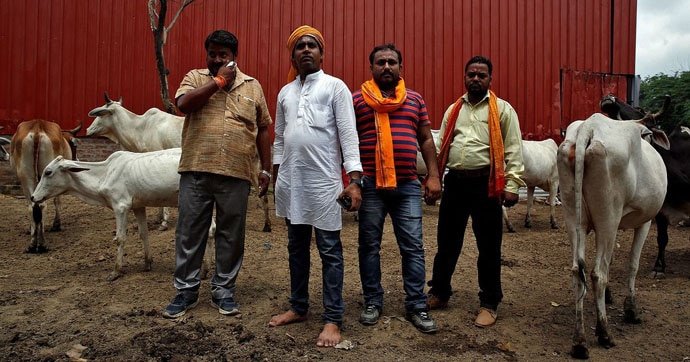 When you have a rebel force who are a minority, it a rebellion to be quelled. What do you do when the majority is hate-injected? Photo: Reuters/File

He then went on to describe how they track down what he called “cow smugglers”. The long frightening story of how hate, violence and toxic masculinity now rule the Indian hinterland.

At this point, I thought about how diabolical this business is, where people abandon cows that can no longer give milk, or are just a burden to them. They do not sell them because it’s dangerous — they feel threatened by the gau rakshaks and their "love" for the "mother cow". So they leave them to roam about and die a violent death, assaulted by disease or killed by the plastic bags they swallow when they go looking for food.

And when a butcher comes along and finds these abandoned cows and decides to kill them, skin them and sell them – the people who have abandoned the cows look away. Now here's where the gau rakshaks intervene for they have a huge resistance to this: they will kill those that are only responding to a problem they created in the first place.

I asked the acharya what they do when one of their cows dies in the gaushala: “We skin it and bury the carcass.”

So you sell the skin of the cow? Suddenly, the acharya said he was very busy and needed to leave, to attend to a court case. He instructed his “boys” to show us around and to allow us to film everywhere.

He then told me that in the evening, he would show us how they caught cow smugglers. “We will go after nightfall and show you how we search trucks and catch them.”

When I asked him if he didn’t think this was a job for the police and other law enforcement agencies, he looked down almost shyly and said: “Well if the government did their job, we wouldn’t have to do it.”

With the acharya gone, the “boys”, who are actually big lumbering men wearing t-shirts with the Gau Raksha Dal logo on it, took over. In contrast to the acharya, they wanted to convince us how peace-loving they were.

So we went to the gaushala, which was teaming with underfed cows. The gau rakshaks stepped forward and started petting them and complained that the donations were not enough to feed the cows.

With each pat on the back of the cows came a new complaint: “The people of this country don’t take care of their cows”, “The jersey cow is not even a real cow – they should not be allowed in the country”, “The Muslims are responsible for all the violence in the country”, “Just see how loving these cows are – how can anyone kill them.”

And so here they were – these protectors of cows who have so many problems, but Saira Banu has but one – her son (Junaid Khan) was killed. Senselessly. For no reason at all.

As the afternoon sun grew stronger, we retreated into a large auditorium-cum-shed, with a stage at one end and a place to park cars at the other. The men pulled their guns out – boys with toys, brainwashed men, fanatics with a misled cause. Many of these men didn’t have day jobs, they were being supported by the Gau Raksha machinery. This was all they had. To me, it sounded a lot like ISIS.

When you have a rebel force who are a minority with a rebellion to be quelled, what happens when the majority is injected with hate and convinced of a singular identity? The 'fringe' is unafraid and fearless, and secular people are now fighting to be heard.

In a complete 180-degree turn of events, it is the government that is supporting and training a force that seems to have gone rogue – they don’t care about that law, they are unafraid and fearless, and those who are secular are now fighting to be heard.

Outside, the promised storm arrived. Raging and howling, and swirling with dust. Creating an opaque wall of mud. Inside, an argument raged between us. A useless pursuit that did not dent anyone’s views on either side.

We then took refuge in silence – waiting for lunch to arrive.

A few hours later, the storm abated and the acharya was back. He instructed his boys to get into cars. And men with guns, sticks, ropes and metal spokes jumped into SUVs and trucks and invited us to ride with them to see how it’s done.

Dreading what was coming up, we reluctantly got into those trucks. Expecting the “check post” to be in a bylane – tucked away from the eyes of the law – we were stunned to find that it was in fact on the main highway at the Panipat toll. While these men brandished weapons and randomly stopped trucks and jumped into them, the police watched, some of them chatted with the acharya, inquiring after his well-being.

Searching truck after truck, as the terrified driver watched – the gau rakshaks were disappointed that no cow was to be found.

And then finally, a small truck arrived with two cows. The enthusiasm of the gau rakshaks was morbid and disproportionate compared to the find. They ran hurriedly and surrounded the truck. The driver had fear written all over this face – he clearly feared for his life.

Just then, a man accompanying the cows jumped off the truck and handed them some papers. The gau rakshaks scanned his papers, the talk was veering towards extortion, and the cop hovered close by, waiting. This time, one of them noticed us filming close by and suddenly, the tone changed: “Oh he has papers – let him go”.

We stood and refused to move till the truck was on its way. After the terrified driver thanked us (perhaps he felt our presence with the camera had saved him) and drove away, we decided to call it a day.

Driving back to Delhi, the world around me felt distinctly unsafe. Armed men with a hate agenda supported by the state felt like the looming dark clouds of militant fanaticism — much like those drifting from Afghanistan, Syria and Iraq.

The question I was left with: when did Indians become so subservient to their idea of middle class prosperity, so much so that we silently watch as the very idea of our nation is squandered?