Through this Act, the Centre has made it mandatory that the Delhi government will have to seek the LG’s opinion on any executive decisions passed in the cabinet, restricting Delhi Legislative Assembly's powers.

On Sunday, President Ram Nath Kovind gave his assent to the Government of the National Capital Territory of Delhi (Amendment) Bill that was passed in both the houses of the Parliament last week. The key point of this amendment is to make it clear that the “government” in Delhi means the “Lieutenant Governor”. This, along with the other clauses, is against the Constitution. Moreover, it violates the Supreme Court verdict on the functioning of the LG and Delhi government.

Through this Act, the Centre has made it mandatory that the Delhi government will have to seek the LG’s opinion on any executive decisions passed in the cabinet. It also restricts the power of the Delhi Legislative Assembly. The Assembly will now have to send all the Bills passed to the LG for his assent. The Act states: 'When a Bill has been passed by the Legislative Assembly, it shall be presented to the Lieutenant Governor and the Lieutenant Governor shall declare either that he assents to the Bill or that he withholds assent therefrom or that he reserves the Bill for the consideration of the President'.

According to the Act, the Assembly shall not make any rules to enable itself or its committees to consider the matters of day-to-day administration or conduct enquiries on administrative decisions.

To understand the issue better, we need to look into the Supreme Court verdict of 2018.

In July 2018, the Constitution Bench of the Supreme Court observed that the Lieutenant Governor of Delhi has no independent decision-making power and that he should work on the advice of the Delhi government. The Delhi government was given full power of taking decisions, except on three subjects — police, law and order, and land.

The verdict further clarified that the cabinet has full authority to take action on the Bills passed by the Delhi Legislative Assembly. It went on to add that the LG can object to any matter, but it should not be every matter. Now, with the latest amendment, all these points have been ignored because it mandates that the Delhi government should send every decision to the LG for his approval.

Moreover, this Act restricts the power of the Delhi Legislative Assembly, contradicting the Supreme Court verdict, and makes it highly unconstitutional. 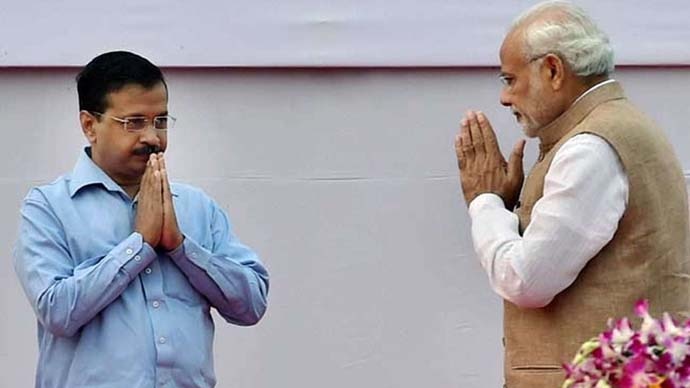 Is the BJP scared of Kejriwal’s developmental model of governance? (File photo: PTI)

The history of Delhi's governance has always been a bit controversial. Delhi is the national capital and belongs to the entire country. It was perceived that in such a situation, absolute power cannot be with the state government, in national interest.

Despite this, BJP and Congress have continuously demanded full statehood, but it was never achieved. Initially, Delhi became a Part-C state. In 1951, Delhi got its first chief minister — Chaudhary Brahm Prakash. Due to his stand-off with the then Chief Commissioner and the Union Home Minister, he had to resign in 1955. In 1956, Delhi became a Union Territory. A decade later, in 1966, Delhi got a metropolitan council with 56 elected members. In 1987, the Balakrishnan Committee (or Sarkaria Committee) was formed to look into the matter and recommend the need for the Legislative Assembly. In 1989, the Commission recommended that there should be a Legislative Assembly with limited power. Based on this, the 69th amendment of the Constitution took place and the GNCTD Act of 1991 was passed in the Parliament.

The fundamental structure of a democracy is that citizens elect a government by voting and the government runs the state. It is the same in the case of Delhi. The MLAs have accountability towards the people. On the other hand, the Lieutenant Governor is an appointed authority who has no accountability towards people. This is why the new amendment of the GNCTD Act absolutely violates the mandate of the people. For every day-to-day need, a citizen of Delhi will not be able to go to the LG or the Home Minister. He or she will have to be dependent on the local MLA. But this Act makes the MLA powerless.

What kind of a democracy is this, where the elected representatives have no power and an appointed administrator has all the power?

Today, every citizen of Delhi is wondering why such a decision was taken by the BJP-led government at the Centre. Significantly, during the discussion over this Bill in both the houses of the Parliament, a unique show of strength from a united opposition was witnessed.

The Congress and AAP, which are generally are at loggerheads with each other, came together. The Congress, along with around 15 other political parties, protested against this Bill inside the house.

BJP’s hunger for power has now become well-known. It is visible that the BJP tries to rule every state by any and every possible means — be it by aligning with others, by poaching MLAs, or by threatening other political parties with central agencies. The question is whether the only goal behind this Act is to bring Delhi fully under the control of the BJP government or not.

Furthermore, some deeper political questions also arise about the popularity of Aam Aadmi Partry and Delhi Chief Minister Arvind Kejriwal. AAP is a political party that has swept away BJP’s voter base in Delhi. In the 2020 Assembly elections, BJP won just eight out of 70 seats. In the previous Assembly elections, it won just three seats. The question arises whether BJP is scared of Kejriwal’s developmental model of governance, or is it scared of Kejriwal’s popularity, or is it scared of the way AAP is expanding after a significant performance in the recent Gujarat local body elections? The question is also whether the BJP is scared that AAP and Arvind Kejriwal are standing by the farmers from Day One.

Every political ideology has various sides and the political ideology of the Aam Aadmi Party can be debated upon. Some people will agree and some will not. But that does not do away with the importance of the ideology. Disagreement on ideology is the beauty of our democracy.

BJP has been trying to establish itself as the most nationalistic political party with their interpretation of deshbhakti, which at the end of the day, is the RSS view of nationalism. But here, AAP is creating a parallel discourse on deshbhakti which is about the right to education, right to healthcare and being a socially responsible citizen. The question now is whether the RSS and BJP are rattled by this parallel idea of deshbhakti that they might be seeing as a potential to woo their non-traditional vote bank. With all these questions, it is the fundamental right of any party or government to uphold the Constitution. Therefore, passing any Bill which is unconstitutional and disrespects the mandate of the people is condemnable.