Divya Spandana is wrong and Google, as always, is right.

The history of India began in 2014, so is it surprising that Google thinks Narendra Modi is the first prime minister of India? I don't see why Divya Spandana is surprised. After all, our ancients knew of surrogacy, plastic surgery and of the internet much before the West. India was not forged from mass migration and all its Hindu inhabitants were directly descended from the land’s first inhabitants. And the only progress that India has seen has been since 2014, when the Era of Modi dawned.

.@Google @GoogleIndia what algorithm of yours allows this?! You’re so full of junk- pic.twitter.com/GHyxh3fEWm

For one era to consolidate, another has to be wiped out. And for the RSS project of Making India Great Again, the reference point has to be a remote era rather than the recent past, where its own role has been less than stellar. Hence the feverish rewriting taking place in textbooks across India – in Rajasthan, Maharana Pratap is portrayed as the winner of the Battle of Haldighati while in Maharashtra, Class VII will be taught about Shivaji but not Razia Sultana or Mohammad Bin Tughlaq or even Sher Shah Suri. At the Centre, a committee has been constituted to make recommendations to revise textbooks. The end is to show that history began in India, and that today’s Hindu population traces direct lineage to the land’s first inhabitants – an idea that was anathema to Jawaharlal Nehru, who insisted that Indian culture was more than just Hindu culture.

This also explains why Prime Minister Modi has to constantly attack Nehru, whether it was in November in the run-up to Gujarat elections (when he said “If there was no Sardar Patel, the temple in Somnath would not have been possible. Some people are remembering Somnath today and I have to ask them – have you forgotten history? Your parnana (great grandfather), our first Prime Minister, was not happy with the idea of a temple being built there”), or most recently in Parliament in February, when he said “all of Kashmir would have been India’s if Patel had been allowed to become India’s first prime minister”.

It's a different matter that Patel had little interest in Kashmir and that he died in 1950. It is also evident in their support for the family of Netaji Subhash Chandra Bose, who insist there was a conspiracy around his death – including Nehru sanctioning spies who would keep a watch on them.

In order to complete the obliteration of Nehru, his contemporaries have to be elevated. Also Modi has to become him, from his celebration of India's scientific temper to his public emphasis on cooperative federalism. 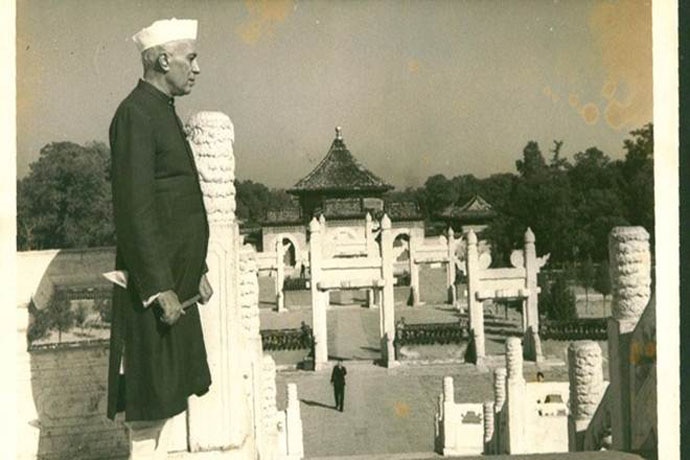 Modi is not alone in his dislike of Nehru. The RSS shares his deep hatred of India's first prime minister. Photo: PTI

Hence also Modi's very public conquest of the West and his calibrated embraces. The West is, after all, the site of Nehru’s ideological education. It is also the site of his many diplomatic victories, whether it was the Non Aligned Movement, or India's role in the Commonwealth. It is no surprise that Modi has retraced the footsteps of Nehru, including most recently, in going to Wuhan and being Bhai-Bhai with the Chinese.

Modi is not alone in his dislike of Nehru. The RSS shares his deep hatred of India's first prime minister, seeing him as single handedly responsible for establishing our syncretic culture. If Nehru is erased from history, it allows them to foist their version of Indian triumphalism. Everything changes. The Nehru achkan becomes the Modi jacket; the rose in the buttonhole becomes the pocket square; and the Nehru prose becomes the Modi slogans.

There’s even a psychological theory for this – in 1971, William Irvin Thompson, a professor at York University in Toronto, wrote an op-ed in The New York Times titled “We Become What We Hate,” describing the way in which “thoughts can become inverted when they are reflected in actions”. This is popularly known as you-spot-it-you-got-it. So I guess Divya Spandana is wrong and Google, as always, is right.

Also read: India belongs to Hindus, Ramayana is not a myth: BJP govt is making (up) history