Islamabad is trying to buy time and open a conversation with the Donald Trump administration after detaining 26/11 mastermind yet again.

Facing a deadline to act against UN designated terror organisations and individuals at the Paris-based Financial Action Task Force (FATF), and with White House chief of staff, Reince Priebus, spelling out that Pakistan could be added to the list of seven countries facing travel restrictions to the US, Islamabad, on Monday, rushed to detain 26/11 Mumbai terror attacks mastermind Hafiz Muhammed Saeed.

But on ground there are no indications that Pakistan is at all serious about cracking down on terror, especially dismantling the India-centric military-jihad terror complex. Perhaps forewarned by his handlers in Pakistan's notorious spy agency ISI, Saeed not only formed a new terror group - Tehreek-e-Azadi Kashmir - before the token axe fell on Jamat-ud-Dawa (JuD) and Falah-e-Insaniyat Foundation (FIF), but the group is also suspected to have moved considerable funds out of JuD/FIF accounts.

Four others detained along with him are Professor Zafar Iqbal, co-founder of terrorist organisation Lashkar-e-Taiba, Mufti Abdur Rahman Abid, the grand mufti of terror front Jamat-ud-Dawa, Abdullah Ubaid, in-charge of the Shuda-e-Wursa (department of terrorists killed in Jammu and Kashmir) and Qazi Kashif Niaz, editor of the terror group's mouthpiece.

The timing of Saeed's 90-day detention is curious. Nine years after 26/11 Mumbai terror attacks, Pakistan has detained Hafiz Saeed and the detention order has no clarity on charges against him.

The detention order states that Saeed has been detained under section (I) 11 EEE of Pakistan Anti-Terror Act 1997, for a period of 90 days starting January 30. A subsequent order said that house number 116 E, Johar Town, Lahore (the terror mastermind's house) had been converted into a sub jail. 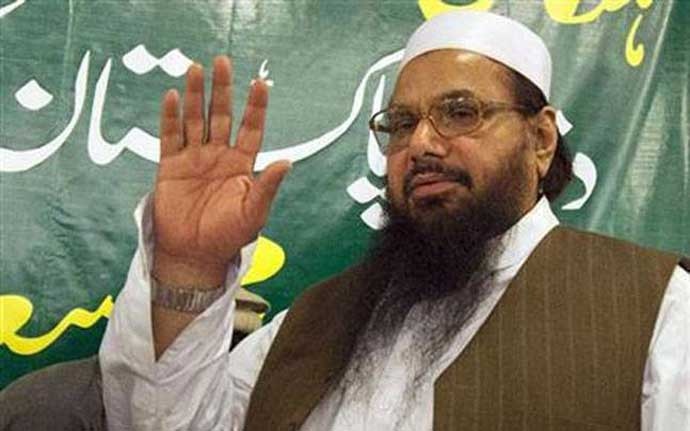 There's a sense of déjà vu here. Hafiz Saeed was detained after the Parliament attack of 2001, Mumbai train attacks of 2006 when 187 innocent Indians were killed, and once again post 26/11, when 166 people lost their lives in Mumbai. Pakistan has never prosecuted Saeed in the right earnest.

Never was evidence of the terror plot hatched in Pakistan gathered by Pakistani investigators, despite evidence provided by both Ajmal Amir Kasab, the Pakistani terrorist caught alive during 26/11, as well as Abu Jundal, who was present in that Karachi control room directing the terror attack.

However, Pakistan is desperate to remain in the "white" (all clear) list of the Paris-based Financial Action Task Force (FATF) and had to comply with its conditions freezing assets of JuD and FIF under the UN resolution 1267. Pakistan has, in the past, fallen foul of the FATF, being seen as a terror-financier country, and before the January 31 deadline, made the perfunctory gesture of detaining Hafiz Saeed and other terror ideologues of LeT/JuD/FIF.

Analysts see a combination of factors prompting Pakistan to hurriedly act against Saeed.

This included US president Donald Trump not mincing his words, saying he would crack down on radical Islamist terror. Both Hafiz Saeed and Jaish-e-Muhammed's Maulana Masud Azhar symbolise the radical Islamic terror in this region. But the US administration is well aware the tentacles of both LeT and JeM have spread across Europe and the US.

The arrest of two terrorists of Pakistani origin - Tahawwur Hussein Rana (holding a Canadian passport) and David Coleman Headley or Dawood Gilani (holding a US passport) - showed LeT footprints in the US, Canada and even Europe (Denmark terror plot).

While Pakistan may try to buy time and open a conversation with the Trump administration after detaining Hafiz Saeed, claiming it needs more time to crack down on radical Islamic terror that poses an existential threat to Pakistan, Trump is expected to follow up on his campaign promise to eradicate it.

In fact, from 2012 to 2016, Donald Trump has repeatedly singled out Pakistan-sponsored terror. In July 2012 he tweeted: "When will Pakistan apologise for providing sanctuary to Osama bin Laden for 6 years. There are not friends of ours, there are plenty of other terrorists in Pakistan, we know that."

When will Pakistan apologize to us for providing safe sanctuary to Osama Bin Laden for 6 years?! Some "ally."

In September 2015, he tweeted: "Probably the most dangerous country in the world today, the only country that can check Pakistan is India." He has continued to criticise Pakistan-generated terrorism all through.

Another radical Islamic attack, this time in Pakistan, targeting Christian women & children. At least 67 dead,400 injured. I alone can solve

In fact, the White House transcript of President Donald Trump and Prime Minister Narendra Modi's phone call focuses on India and the US standing shoulder to shoulder in the global war on terror.

In March 2016, Donald Trump exposed Pakistan once again when he tweeted: "Pakistan is semi-unstable and the problem is they have nuclear weapons."

The elite in Pakistan appear genuinely petrified of being on the US ban list and this perhaps prompted a token action against Hafiz Saeed. Each time that Pakistan was in a soup internationally, it looked to India for a bail out and several times in the past, India bailed Pakistan out - whether it was former prime minister Atal Bihari Vajpayee giving legitimacy to a military dictator and architect of Kargil, Pervez Musharraf, by inviting him to Agra, or Dr Manmohan Singh agreeing to the reference of Balochistan at Sharm-el-Sheikh.

It is hoped this time India will step up the pressure and ensure action is taken not only against Hafiz Saeed but also the mastermind of Pathankot terror attack, Maulana Masud Azhar of JeM. China has protected itself from Pakistani terror so far, but it remains to be seen for how long Beijing can continue to defend the indefensible. New Delhi insists it will continue to expose Masud Azhar, Hafiz Saeed and several other pawns of terror used by Pakistan as state policy.

Pakistan army's spokesperson Major General Asif Gafoor has claimed Hafiz Saeed's detention is in Pakistan's national interest. But so far there is no indication that Pakistan intends to prosecute Hafiz Saeed. What are the charges against him? What is the evidence that Pakistan intends to collect to prove his complicity in terror attacks in India and Indian interests in Afghanistan? All of this would only implicate the Pakistan army and ISI.

For nine years, Pakistan has refused to act against Hafiz Saeed and other accused in the 26/11 Mumbai terror attacks. Even now, it is unlikely to, unless strong and sustained pressure is built and maintained. Only then will Pakistan turn a new leaf.

Post your comment
#Donald Trump, #Terrorism, #Pakistan, #Hafiz Saeed
The views and opinions expressed in this article are those of the authors and do not necessarily reflect the official policy or position of DailyO.in or the India Today Group. The writers are solely responsible for any claims arising out of the contents of this article.