When Prime Minister Narendra Modi mentioned Karan Acharya, the artist whose Hanuman image has become iconic, as the "pride of Mangaluru" he acknowledged what was already a trend – the Angry Hanuman image that has surfaced on cars, posters, T-shirts and social media handles.

Though Acharya has insisted in several subsequent interviews that Hanuman is not angry, but has "attitude", the descriptor has stuck, and has emerged as a symbol of a more assertive, aggressive Hindutva. Scholar Madhavi Menon believes the angry Hanuman, the triangular saffron flags in his honour, are all in keeping with his character. He is the soldier-warrior devoted to the service of Ram.

Perfect for a citizen of a potential Ram Rajya, right? Wrong, says Parvez Dewan, founder of Indpaedia, who notes that the traditional Hanuman idols depict him in an angry mood in less than 0.6 per cent of the case.

Dewan, who has written three books on Hanuman and has just completed a 450-page definitive biography of Hanumanji using Valmiki, Kamb and Tulsi, regional Ramayans and other scriptures, says, ''Râvan’s spy Shuk said, ‘When Hanuman gets angry he can wipe out entire oceans.’ In these (cases) Hanumanji is shown killing lust (Sûrpnakhâ), evil astrological influences (panvati) or the demons Kâlnémi, Mahi-râvan and Ahi-râvan.''

But, he notes, "Hanumanji never started a fight. All his wars were retaliatory. Hanumanji was created to bring religious sects together. Shaivites worship him as the eleventh Rudr of Lord Shiv. The Hanumat-sehesr-nâm Stotr mentions seven forms of Lord Shiv that Hanumân jî embodies. And yet Hanumanji is a devotee of Sri Ram, thereby uniting the Vaishnavite and Shaivite schools. Bal Hanuman adored Maa Durga. When he saw his mother, Añjanâ, he told her that he beheld all nine forms of Maa Durga in her. Later, before setting out to attack Mahi-ravan and Ahi-ravan, Hanumanji composed and recited the 18-verse Laghu Saptasathi (stotr for Goddess Durga). Hanumanji guards the cave of Srî Mâtâ Vaishno Dévî jî. He thus unites the Shakti school with Vaishnavites and Shaivites.'' 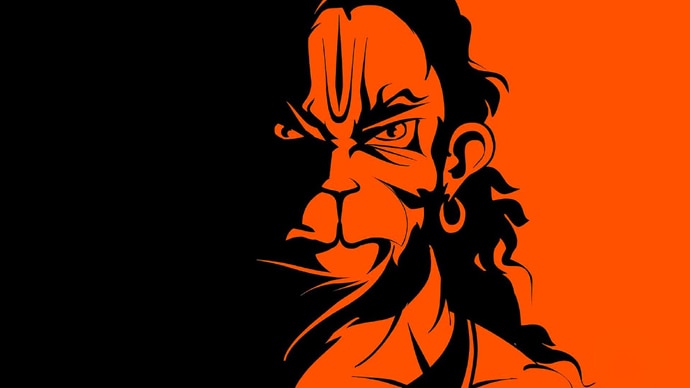 It is interesting that the icon popped up in Bangalore about two years ago first, and may have become popular because it also suits the BJP which believes in an all-pervasive Hinduism that seeks to enfold all dissenting sects – Lingayats, who have been accorded special states, comprise 17 per cent of the state's population and worship Shiva.

But, as Dewan emphasises again, "in more than 99 per cent of his idols, Hanumanji's face exudes humility as he carries the Sanjeevani. Or his face is serene and meditative."

Hanuman also travels well with former US President Barack Obama being only his latest adherent – he was always said to carry a small statuette of Hanuman in his pocket. Dewan says, "The Shûnya Purân of the Buddhists wrote that Hanumanji was a minister in Lord Buddha’s cabinet and his gatekeeper. For the Jains Hanumân jî is the eighteenth of the twenty-four Kâmdévs. In the Gurmat Ideology Hanuvantra is Hukam and ShabadGuru. Guru Nanak Dev ji met Hanuvantra in that form. Further down the centuries, it stands to reason that Hanumanji would extend his ecumenical mission to beliefs that originated outside India as well.''