The new caste equation has the potential to change the grand old party's fate, but over-reliance on Patidars negates its core ideologies.

In 2015, when Hardik Patel emerged as the angry young voice from the affluent Patidar community seeking reservation for the community, he was mocked at and dismissed as one with the shelf-life of a season in India. But it’s been two years and he has emerged the singular most important factor in this elections.

A few days ago, Patel, all of 23 years, announced in a presser that a reservation proposal put forward for the Patidar community if it comes to power is acceptable.

The Congress, he claimed, is at least willing to conduct a survey to include the Patidars under the Other Backward Class (OBC) category, which is the first step to their inclusion in the reserved category. This has been a long-standing demand of Hardik that the BJP has refused to oblige. 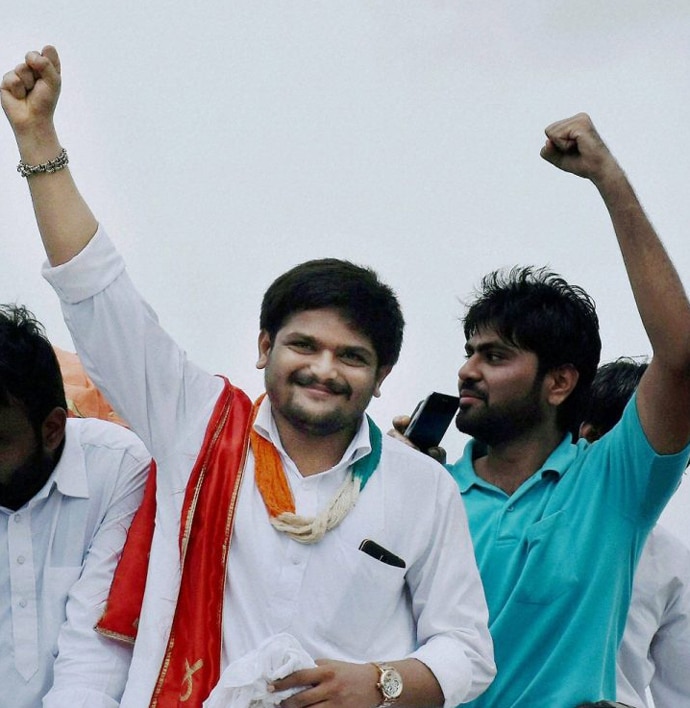 The issues Hardik Patel raises in his speeches are about expensive education, lack of jobs, poor remuneration to farmers, absence of affordable public healthcare facilities.

Apparently, neither of that has happened. And that is both good and bad news for the Congress, as well as the BJP. For the Congress, this signifies that Hardik’s appeal is likely to swing Patidar votes in its favour. In the short run, for the sake of this elections, it is good news.

Patidars are known to vote en bloc, which is essentially the reason they are a political force to reckon with. They form up to 18 per cent of the electorate. It is estimated that even if not the entire community, at least the youth under the age of 30, who have essentially not seen anything, but a BJP government in their lifetime, could possibly shift loyalties to the Congress. For 22 years, Patidars have remained loyal to the BJP. As many as 38 of the 48 Patidar candidates who won in 2012 Assembly elections were from the BJP.

Narendra Modi and his galaxy of campaigners, of course, are aware of this and have therefore started their own bit of outreach to the community. Modi in his speeches recalled how all four Patel CMs of Gujarat - Babu Jashbhai Patel, Chimanbhai Patel, Keshubhai Patel and Anandiben Patel - were ousted by the Congress and supported by the BJP. The BJP has repeatedly reminded of the Congress’s KHAM (Kshatriya, Harijan, Adivasi and Muslim) caste equation, which left the Patels out of the power play in the 1980s by Congress’s Madhavsinh Solanki. This is could be understood only by the elders in the Patidar community, who have seen a Congress rule and experienced caste discrimination. Hardik’s audience is not this demography.

After 22 years in power, the BJP is feeling the severe pinch of anti-incumbency, and it is felt in earnest by the youth, who only blame the BJP government for it. When Modi repeatedly says the issues of today are because of the 70 years of Congress in power, it doesn’t cut much ice with Patidar youth. The issues Hardik raises in his speeches are about expensive education, lack of jobs, poor remuneration to farmers, absence of affordable public healthcare facilities.

The concern for the BJP here is because these issues do exist, and it is left with only two planks to reach out to the Patidar community - remind it of the injustice it suffered at the hands of Congress in the KHAM equation; and keep reminding them subtly and often not so subtly that BJP is the government in power at the Centre and is going to form the government in Gujarat as well - with or without the Patidars’ support. The second point is also important because the Patidar community does not like to associate with a party that is not in power.

The BJP knows it is walking a tightrope here. As polling day approaches, if Hardik’s rallies continue to garner the response they are doing currently, and somehow an environment is created that the BJP is losing, the mood in the community might change even at the last minute.

On the other hand is the Congress waiting with bated breath to pick up the spoils. In the short-term that means good news, but not so in the long-term. If the Patidar community starts feeling that it has been instrumental in getting victory for the Congress, it would not stop at arm-twisting the party for any demand. Key posts in the government would be small things to ask for in exchange.

For the Congress, the first challenge is supporting the Patidars' conflicts with its inherent pro-poor ideology. The grand old party’s core votebank is the OBCs, Dalits, minorities and tribals. Also, representatives of these communities form the party’s top leadership. Making way for Patidar leaders nominated by Hardik would be tricky for the Congress to manage in the long run. Already at Rahul Gandhi’s rallies, one sees that Patidar youth, wearing the Jai Sardar, Jai Patidar cap, do not allow Rahul to speak till he wears the cap offered by them.

The group of youth practically hold the entire really to ransom with their shouts and slogans. It is understood this youth are the same ones who attend Hardik’s rallies and are sent here by PAAS members.

Hardik, on his part, has categorically refused to share the stage with the Congress. He has, in fact, said right now his agenda is to defeat the BJP. If BJP’s policies change and if they are more considerate towards Patidars’ demands, "we will vote them back to power". Hardik and lakhs of Patidar youth are convinced in their mind that they are going to appoint the next of Gujarat government.

Preposterous as it may sound, it is not impossible. The only way to achieve this would be for the Patidar community to vote as one, which is not impossible. The question to ask is, can 23-year-old Hardik do what veterans like Keshubhai and Chimanbhai failed to do: Unite the Kadva and Leuva Patels? The community has 37 MLAs in the 182-member Assembly. In 2012, of the 48 Patel candidates who won at the polls, 38 were from the BJP.

Well, December 18 will reveal all the answers.

Post your comment
#Patels, #Modi, #Gujarat Assembly elections, #Hardik Patel
The views and opinions expressed in this article are those of the authors and do not necessarily reflect the official policy or position of DailyO.in or the India Today Group. The writers are solely responsible for any claims arising out of the contents of this article.