The defining tweet in the Haryana Assembly elections was that by chief minister-hopeful Deepender Singh Hooda:

The tweet translates as: “Save this tweet of mine; Haryana is about to break the arrogance of the Khattar Sarkar.”

The BJP is still comfortably ahead of Congress in Haryana, but five seats short of crossing the majority mark. It is this that makes the Jannayak Janata Party (JJP), formed just 319 days back, so important and its young leader, Dushyant Chautala, so ecstatic. The great-grandson of Lok Dal strongman Devi Lal, Dushyant has made a dramatic impact. Both Prime Minister Narendra Modi and home minister Amit Shah praised their party’s performance, terming it a great victory. 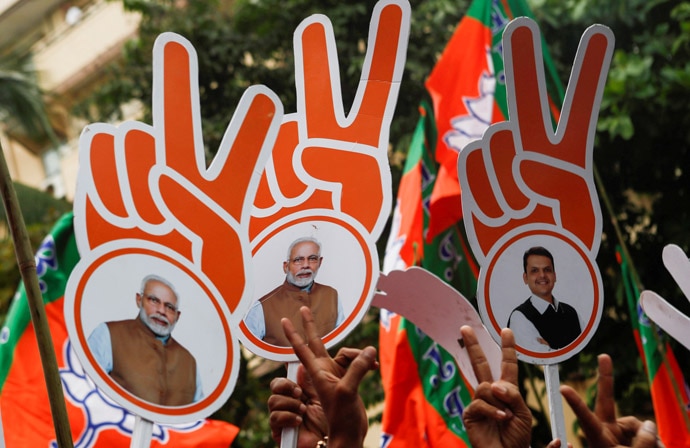 The BJP is comfortably ahead of Congress in Haryana. In Maharashtra, it is going to form the government for the second consecutive time. (Photo: Reuters)

The truth, however, is that they lost seven seats compared to 2014. However, if we consider the longer perspective, the BJP’s rise from four seats in 2009 to 47 seats in 2014 in Haryana, then decline to 40 in these elections, still demonstrates a remarkable ascent and considerable staying power. What is more, of the seven independents, even if five join the BJP, they will have a majority without the support of JJP.

In Maharashtra, the results are closer to predictions. The BJP, on its own, is nowhere close to crossing the magic midway mark of 145 seats. Its uneasy alliance with the Shiv Sena must continue. What is truly remarkable, however, is the rise of another Thackeray, Aaditya, who won the Worli Assembly seat in Mumbai. Indian politics remains a family-run business for most part.

Another noteworthy factor is the perseverance of regional satraps. This election’s winner is clearly Nationalist Congress Party (NCP) supremo Sharad Pawar. Just when everyone was writing his party off, he has emerged ahead of the Congress. Also noteworthy is the persistence of the Congress. Though leaderless and rudderless, it still manages to garner not only a respectable vote share, but also a considerable tally of seats. Did the economy play a decisive role in these polls compared to more emotive issues such as Article 370, national security, anti-Pakistan rhetoric and so on?

The government and the ruling party had already secured enough traction from the latter; the voters didn’t want to reward the BJP more than they already had in the general elections. They preferred to go with long-standing alliances, networks, and caste considerations when it came to the Assembly polls.

Forget the exact figures of which party won how many seats in the Assembly elections in Maharashtra and Haryana. Let’s look at the big picture.

The first takeaway is that it’s a jolt for the BJP and a reality check for the master strategist duo of Narendra Modi and Amit Shah.

The BJP has lost Haryana, at least morally, though mathematically BJP can still form the government. But it is like trying to win an extremely tight cricket match on the basis of Duckworth-Lewis pyrotechnics rather than on the strength of your players, something which would be an anathema for the Modi and Shah duo. The BJP vote share in Haryana fell by a massive 22 per cent.

Manohar Lal Khattar, who was overconfident of having a second consecutive dash at chief ministership, has had to eat crow. He had bragged “abki baar 75 paar”— will get 75 seats this time (out of 90).

In Maharashtra, the situation is just the opposite. The BJP has won both morally and mathematically, but the party would be anxious about the repeat of the Karnataka model by the Congress. Shiv Sena never hid its displeasure when its wings were clipped by an on-song big brother BJP. But now the tables have turned. The Shiv Sena is set to give a tough time to the BJP in the portfolio distribution now. (Photo: India Today)

There are three scenarios in Maharashtra as of now, like a cricket match, and all three results are probable: victory, defeat or draw. Scenario 1 and 2: BJP has lost its bargaining power and it’s a given, now that the old days of the Modi-era glory are gone. The Shiv Sena will inevitably drive a hard bargain. So it has to be a 50:50, which means that BJP and Shiv Sena take turns in ruling the state — the Jammu and Kashmir experiment. However, given the state of things, it’s quite likely that it will be Aaditya Thackeray as chief minister first, not a BJP CM. But it’s the third scenario which should be a nightmare for the BJP.

Will the Congress repeat Karnataka just to keep the BJP out of power? And imagine the optics: India’s financial capital back to Congress control! It is possible, as Shiv Sena, NCP and Congress put together will have enough numbers and Sena won’t require BJP to be in government. Moreover, the Congress-NCP can give to Sena what BJP can’t: chief ministership to Aaditya Thackeray!

The moral of the story: things are no longer hunky dory for the BJP. Even in states like Maharashtra and Haryana, where there are a large number of people in armed services give a thumbs-down to the BJP, it’s a matter of concern for the party which claims to be the world’s largest party. The BJP needs to introspect since these polls were the first test for the Modi-led BJP. It has performed so miserably even at a time when the Congress is moribund and the opposition pulped.