Haryana government wants gyms-cum-RSS shakhas, but has no place for Muslims to pray?

The ML Khattar-led BJP government in Haryana has announced its plans to build gymnasiums in two acres of panchayati land in villages across the state. While village youths can practise yoga, wrestling and other sports, these gyms will double up as RSS shakhas, according to a report in India Today.

This is not the first time that a BJP government is unabashedly trying to expand the RSS footprint that is often done in the name of promoting Indian (read Hindu) culture and history. Holding morning shakhas and yoga sessions in parks and open grounds, including in university and school campuses, have already become common sights in cities and smaller towns. 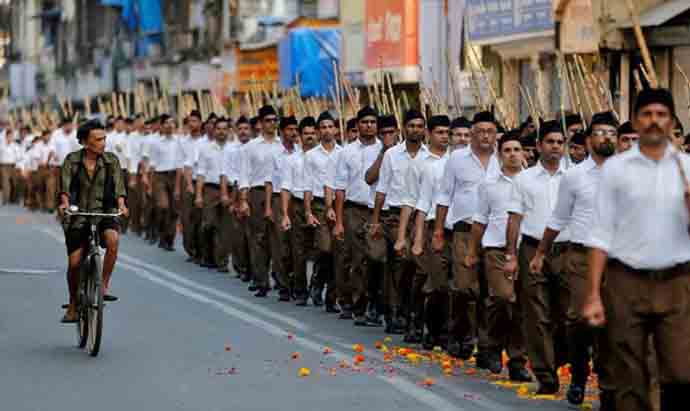 His statement came after congregational prayers of Muslims were disrupted on two successive Fridays in Gurgaon by a new front of vigilantes, Sanyukt Hindu Sangharsh Samiti.

What is problematic about the public stand of the Haryana government is that in one stroke it legitimised the vigilantism instead of condemning it. Even if we agree that Muslims do not have a right to offer prayers in parks, should that not be left to the police to handle rather than encouraging mob vigilantism?

Hindu (and Jains) saints are invited to deliver sermons inside state Assemblies while the public space visibly continues to shrink for Muslims in "new India".

The bigger problem with the Haryana government's stand, however, is that there are not many mosques in urban pockets of Gurgaon, or, for that matter, new townships that are coming up across India, unless there are some old Muslim-dominated villages in the vicinity.

As the population of Muslims have risen in these newly developed urban pockets surrounding Delhi, the need for more mosques has come up. It is mainly on Friday when Muslims want to offer prayers in congregation that the problem becomes more acute.

For a population of about three lakh Muslims in Gurgaon — add to it an additional floating population of Muslims who come to offices everyday for work — there are less than 30 mosques, according to some reports. The problem is acute in the vicinity of DLF Cyber City. There are about 12,975 Waqf properties under Haryana Waqf Board, most of which are mosques, madrasas, graveyards, dargah etc. Many of these were encroached by locals in the past few decades as Muslims from these areas had migrated to Pakistan at the time of Partition.

In recent decades, as districts from UP, Haryana and Rajasthan surrounding Delhi were included in Delhi-NCR, land prices soared up exponentially, bringing to fore the land mafia.

From Karnal to Faridabad, several Muslim graveyards and other waqf properties have been taken over illegally. In over four acres of land in Sector 6 in Karnal, a town in Haryana, about 115km from the national capital, where colonies have now developed was once a Muslim graveyard. So was a six-acre plot in Vasant Vihar on the Kailash Road in the same town.

Call it the ignorance of the state Waqf board or its complicity that in the in Banskusla village of Gurgaon district, land belonging to the Waqf board that was part of the village grave yard, was “acquired” by IMT Manesar on July 16, 2005, and the same was awarded by the Waqf board dated July 27, 2006.

All state waqf boards are mired in corruption and in collusion with local administrations they have either sold or leased several prime location plots at throwaway prices. Encroachments by different governments are also equally high. From parts of Delhi’s Indraprastha Park to Hyderabad’s airport and the entire Calcutta Golf Club are sitting on waqf land.

What could be more ironic that even though waqf properties comprise the third largest land holding in the country, after only the railways and the defence, Muslims still do not have enough space to offer prayers.

The silver lining in the ongoing debate is that the state waqf board immediately swung into action and has submitted a list of 19 such waqf properties in Gurgaon itself that have been lying unused, but locals have resisted construction of any mosques there.

In fact, across the state, the Haryana Waqf Board has already identified 326 such encroached properties in district-wise investigation, which is still not complete. Anil Vij, minister in the Khattar cabinet, yet says that “if anybody offering namaz looks for illegal occupation of space, then it can’t be accepted(sic)".

In the Bihar village where I grew up as a child, sound of the conch and bells from a temple on one end of the village bazaar often acted as a background music to the call for evening prayers in the mosque at the centre of the Muslim pocket of my village.

During day-long Hindu religious ceremonies, the temple priest would turn down the volume of loudspeakers for a few minutes when the call for prayers was given in the mosque.

In a communally charged "new India", any visible marker of Muslims, on the other hand, attract suspicions. Liberals have already started preaching Muslims to hide their identity in public places as India is, after all, a secular country.

In several recent cases of communal flare-ups, construction of mosques as manifestations of economic prosperity of Muslims have been suggested as one of the possible reasons in creating tensions.

Resistance against construction or even renovation of old mosques has, in fact, become a new reality in areas with mixed populations, particularly where the number of Muslims are low or they come from very marginalised background.

When local Muslims tried to rebuild a small dilapidated mosque into a concrete structure in Atali village in Ballabgarh tehsil of Faridabad district, it gave way to communal tensions. Hindus of the village attacked about 20 Muslim houses near the mosque, burnt their houses and injured several as a “warning”.

About 500 Muslim villagers, men, women and children were forced to leave the village and stay under tents at Ballabgarh for days during peak summer.

Nuisance in the name of religion?

Use of parks, grounds and even roads and streets for religious and social purposes and political rallies is quite common in India.

During the festive season, "pandals" sprout across all localities, for the goddesses - Kali, Durga, Laxmi -  diverting traffic movement for days, and sometimes weeks in those localities. Ram Leela is performed in different grounds across north India, followed by the ritual burning of effigies of Ravana.

The last decade has also seen a surge in Hindu religious processions, mainly Kawariyas. Many such processions often supported by local vigilante Hindutva groups, use DJs and loudspeakers mounted on open trucks.

They pass through Muslim localities, often timed in a manner to coincide with namaz timings, chanting provocative slogans like “Bharat desh mein rehna hai toh Prabhu Ram ka naam lena hai” and warning them to live like “dead men” (sic), else be prepared to face consequences.

Muslims are often faced with threats like "if you even touch a Hindu, your entire basti will be finished".

Not that all Muslims are passive and mute spectators. As a result, competitive communalism does play out. Even Muslims bring out religious processions during Muharram and Eid-e-Milad, and organise late night "jalsa". But generally there are no outright political overtones or sloganeering to incite Hindu-Muslim violence in these "jalsas" as clerics busy themselves in bickering over narrow sectarian divides.

These are a few social realities that even some liberal journalists conveniently ignore, falling into the Hindutva trap, when they tweet their support to the Khattar government.

Agree with Haryana CM Khattar the place for namaz is the mosque or own homes. It shd also apply to weddings, jagratas, bhandaras, kanwarias and all such. All shrines (of any faith) on encroached public spaces shd be removed

No doubt public places and loudspeakers are often misused, particularly for religio-political processions in this country. No rules and regulations have been enough to check the late night use of blaring loudspeakers.

There certainly needs to be larger debate on inculcating basic civic sense while using public space, particularly when it comes to loudspeaker volume. But that debate must not be blinkered or appear prejudiced against one community.

It's a shame that only "use of loudspeakers for azaan" and "traffic obstruction due to namaz" grab headlines, while governments are free to announce construction of gyms on public land to be used for RSS shakhas.