Kapil Sibal is right to this extent: The building of Ram Janmabhoomi is a political event that divides India and destroys its secular fabric.

On December 6, 1992, the Babri Masjid was destroyed. It was a contrived conspiracy. Raths led by LK Advani and MM Joshi took several months to converge on the masjid in Ayodhya. The Supreme Court’s orders of protection were violated shamelessly.

The rise of the BJP is intimately linked with the Ayodhya movement. In times of crises, Ayodhya surfaces as a rallying cry. The only way to bring neutral secular peace is to rebuild this unusual three-tombed structure of a masjid where it stood as it was before.

The temple movement is founded on historical fantasy and political opportunism. On the BJP’s side, lawyer Harish Salve said, “This is only a title suit.” And was destroying the Babri Masjid a part of a title suit? If so, restore the property to Muslims and confront the truth that there is no evidence that Lord Ram was born on the exact spot where the masjid stands. Of course, his celestial presence is eternal. Thus, the whole case rests on an untruth.

We have a cut-off date from when peace should exist. On September 18, 1991, the Places of Worship Special Provisions Act (Act no. 42 of 1991) decreed, “It is hereby declared that the religious character of public worship existing on August 1, 1947 shall continue to be the same as it existed on that day (section 4).”

And there was a bar on religious conversion of worship places throughout India (section 3). Curiously, the sections came into play on July 11, 1991. That was enough to make what happened on December 6, 1992 a travesty. But there was a further catch in section 5 of the Act that the August 15, 1947 status quo would not apply to the resolution of Ram Janmabhoomi-Babri Masjid judicial disputes. The Parliament lost its nerve. Even in the configuration of words: Ram Janmabhoomi came first. 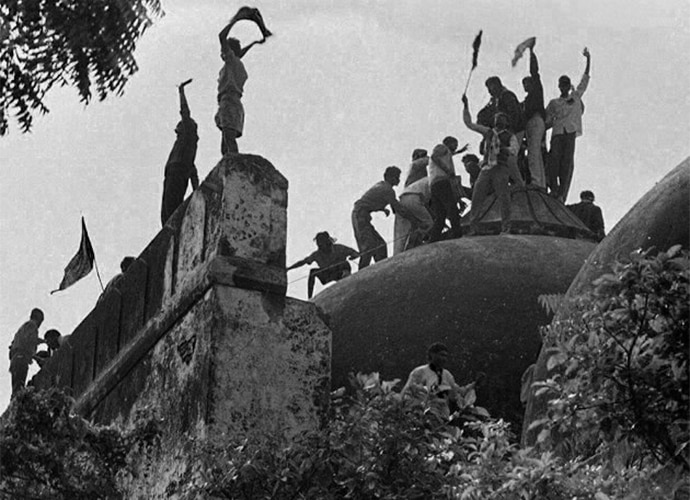 There are so many forms of Hinduism that the “legal attempt” to define them is laughable. The Constitution took the strangely assimilative course that for social welfare, the term “Hindu” shall be construed to include Sikh, Jain or Buddhist religion. This is echoed in the Hindu Marriage and other Acts.

We know this is legal fiction attributable to assimilative Hinduism. The Sikhs were appeased by giving them the constitutionally guaranteed right of “wearing and carrying kirpans”. Muslims are a weak minority (as the Sachar Committee affirms). When the Golden Temple was attacked for whatever reason, it remained and will always remain a cause celebre. In the Swaminarayan case (1966), the Supreme Court forced Swaminarayans to be declared Hindus when they fervently believed they were not.

The court could have imposed untouchability on their temple, but Justice Gajendragadkar wanted to give an expansionist view to Hinduism. The judgment was ridiculed as deciding that a man who believes in S Radhakrishnan, Max Mueller, Bal Gangadhar Tilak and recognising some component of Hinduism is a Hindu.

Actually the history of “Hinduism” (if there be such a faith) is fractious, full of controversy, riddled with violence and indescribable intolerance. Not all Hindus necessarily believe in Lord Ram. No Hindu can pinpoint with any empirical truth the birthplace of Lord Ram.

In a sinister way, by broadening the term “Hindu” to include Sikhs, Buddhist, Jains and others; Christians, Muslims and other faiths were put into a separate group on the premise their faith did not come from India even though they have existed as believers in India for centuries and contributed to India’s culture. By clever interpretation, India consists of two groups: Hindus and non-Hindus to be differentially treated.

I was very surprised to read Justice Verma in the Babri Masjid judgment: “A mosque is not an essential part of the religion of Islam and namaz (prayer) by Muslims can be offered anywhere even in the open.” Thus, for the Supreme Court, all mosques are not essential to the Islamic faith and irrelevant to Islam. On this basis, Hindu worship was allowed to continue at the site.

I have not been able to understand the Supreme Court’s hurry to hear the appeal in this case starting February 8, 2018 and that too by October 2, 2018 when Justice Dipak Misra retires. There are 40 holidays in between amidst other court work which would add a month or two to conclude the hearings entailing around half a million documents.

CJI Misra has already set an example of how not to hear constitution bench matters. I do not agree with Kapil Sibal that the case be heard after the next general election in October 2019. That breathes even more politics into the case. But Sibal is right to this extent: The building of Ram Janmabhoomi is a political event that divides India and destroys its secular fabric.

We are the third largest Muslim country in the world. Its mosques were aggressively destroyed in secular India after 1947. Muslims, Christians and others are second-class citizens in this country. To the world, India is a Hindu country which treats minorities unequally. One of the main reasons for this was the destruction of the Babri masjid. Muslims, Christians and others have been Indians for generations. The embers of partition continue. There is one way out. Rebuild the Babri Masjid first.

Given the ills of Hindu majoritarianism, I decline to have faith in it.

#Ram mandir, #Dipak Misra, #Babri Masjid, #Hindutva
The views and opinions expressed in this article are those of the authors and do not necessarily reflect the official policy or position of DailyO.in or the India Today Group. The writers are solely responsible for any claims arising out of the contents of this article.