It is commonly understood that the most acceptable marker of economic growth of a country is its Gross Domestic Product (GDP). Economists, who rarely agree with each other, acquiesce with this economic measure; that is a considerable achievement by itself.

However, since Prime Minister Narendra Modi took charge in May 2014 four years ago, India’s GDP has become a subject of controversial discussions, especially since it accompanied several grotesque claims of government achievements that appeared questionable (100 per cent rural electrification being the latest casualty).

While the Opposition decried the GDP chest-thumping roar as akin to Chinese cockamamie, the BJP gloated on its spectacular accomplishment, its spokespersons hyperventilating on TV screens even as Jharkhand reported starvation deaths.

Something is clearly amiss. Many think India’s data under Modi is not just cooked but barbecued.

I try to unravel this intriguing conundrum, in brief, by addressing questions that crop up with predictable regularity.

What was the GDP inherited by the NDA from the UPA? 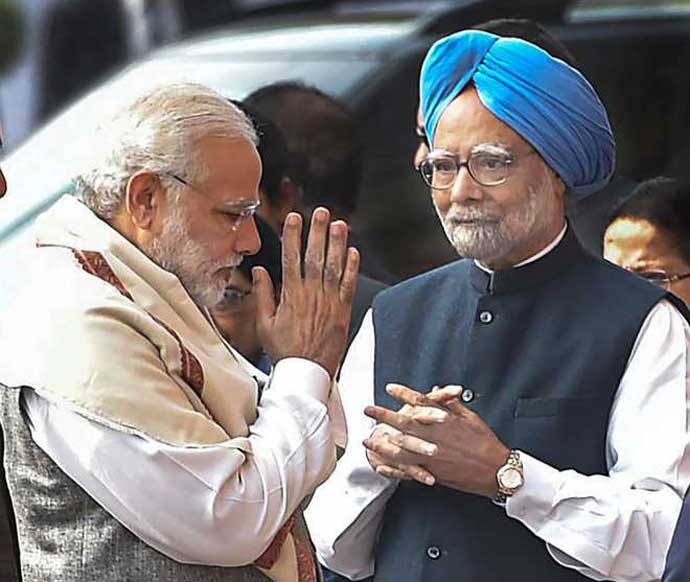 The truth is that India moved into the global financial arena taking giant footsteps under the 10-year period of then PM Manmohan Singh. Photo: PTI

It was 6.9 per cent - healthy, strong and recovering robustly. Modi and the BJP through their massive propaganda machine spread the canard of apocalyptic doom that “India was on the verge of a collapse”, as fearmongering and manufacturing anxiety suits the right-wing strategy of panic-stricken eyeballs.

Donald Trump did the same two years later with his Make America Great Again (the western counterpart of achhe nin), albeit the US economy had seen strong, stable growth during the Obama years.

It is true that the two preceding years had seen a deceleration on account of the currency crisis, oil prices (largely external factors) and the parliamentary paralysis created by a virulent BJP-led Opposition that was resolute in its intent to stall pro-common man policies of the UPA.

The Anna Hazare anti-corruption agitation instilled fear in the decision-making apparatus governed by fearful apparatchiks. The BJP was the biggest political beneficiary of a choreographed protest.

However, despite all that UPA successfully averted the tapering crisis of US Fed rates, and left a buoyant USD 311 billion in foreign exchange reserves and reduced the current account deficit.

What about the claim by Modi that his government is responsible for the miraculous turnaround to make India the fastest growing economy in the world?

It is an absurd proposition that even a kindergarten child will debunk. How can a large economy of an emerging market make such a dramatic turnaround within one year, one which was being disingenuously trashed by Modi as a failure just a few months earlier? 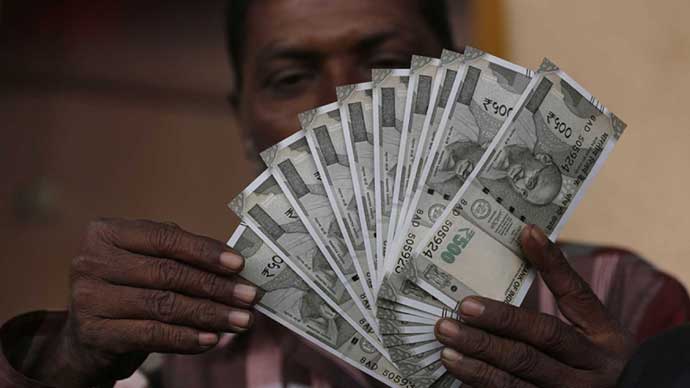 The fact that the GDP after four years in 2017-18 at 6.7 is lower than 6.9 per cent that they received on a silver platter from the UPA says it all. Photo: PTI

The truth is that India moved into the global financial arena taking giant footsteps under the 10-year period of then PM Manmohan Singh.

Many have called it the golden period of India’s economy, as for the first time ever, we witnessed a 10-year average GDP growth rate of 7.7 per cent (that too under the old method of calculating GDP index) and lifted 140 million people above the poverty line, reflecting the successful model of inclusive growth.

China, during the same period, was growing at a stratospheric growth of around 10.5 to 11 per cent. India’s GDP growth has become sluggish and much lower than under UPA, and we are the world’s fastest growing (large) economy only because China slowed down to 6.8 to 7 per cent GDP growth levels.

In short, India was much better off being number two under UPA (China led the race) than being number one under NDA. How do you compare the Congress/UPA GDP performance over that of BJP/NDA?

There is no comparison whatsoever; GDP went up by over 300 per cent during the ten years of UPA. The Congress/UPA performed extraordinarily better compared to the anaemic, almost lackadaisical numbers of NDA.

In fact, NDA had a great opportunity to build on a strong inheritance from the Congress, but wasted a burgeoning growth momentum.

One must remember that the Congress/UPA succeeded despite facing the world’s worst economic crisis since 1931 of the Great Recession of 2007-08, high oil prices (peaking at close to USD 150 per barrel), running a difficult coalition government, and facing repeated parliamentary gridlock because of the blatant filibustering of the BJP.

For example, the GST would have been implemented during the UPA regime if the BJP had not deliberately obstructed the bill for parochial political purposes.

Despite having a huge tailwind of barrel-scraping oi prices at USD 26, a majority government, a stable prosperous world economy, three successive years of good monsoons, several states under their control, and inheriting a healthy economy from the UPA, this government has fallen woefully short.

The fact that the GDP after four years in 2017-18 at 6.7 is lower than 6.9 per cent that they received on a silver platter from the UPA says it all.

Why is the ground reality so different from the headlines and the hype?

It is straightforward; if the BJP/NDA were to adhere to the old UPA GDP index of calculation, our correct GDP today would be close to just 5 per cent ( similarly if the new formula was to be applied on UPA GDP, they would have averaged over 9.5 per cent during the 10-year-period at a conservative estimate, which the Modi government ought to make a transparent declaration of).

Under Modi, what you see is not what you get; there is selective cherry-picking, exaggerated claims, new methodologies adopted to make a sheep look like a lion, and in many cases, data that inspires grave apprehensions about their authenticity. Modi indulges in a lot of puffery.

Thus, we have this atrocious contradiction where Modi claims that India is the fastest growing economy in the world at the affluent-networks at Davos, but the farmers are protesting under severe rural distress, joblessness is forcing MBAs, PhDs, engineers to apply for jobs of peons and constables (our new “pakoda economy”), private investments, exports, aggregate private expenditure are all looking dismal. NPAs have crossed Rs 10 lakh crore, up almost 400 per cent from 2014 (also record number of banking frauds have happened).

It hardly needs further assertion that demonetisation deracinated the rural economy, in particular, and the ham-handed execution of GST crippled small businesses.

The damage is still being undone.

Is GDP the only macro-indicator of the health of the economy?

No, it is not, it is just the easiest one. The true health of a country is determined through a more detailed biopsy of economic and social indicators, mostly job creation, per capita income, export performance, gross fixed capital formation, reduction in poverty levels, per capita expenditure allocations to health and education etc.

On all these factors, Modi has slipped by having both feet on a banana peel. We must not forget that the relevant index for India is Human Development Index (where we are at a lowly 134), Global Hunger Index (at rank 100) etc. The fact that we have seen an alarming dip in Press Freedom Index (138), or the Gender Disparity Index (108) should tell us that this government has merely indulged in headline-hunting, rhetorical speeches, statistical manipulation and massive publicity blitzkrieg (approximately Rs 4,500 crore on self-promotion).

Besides the economy, Indian society and democracy are themselves undergoing a stress-test. But as Karnataka and the by-poll results have shown, the chickens are coming home to roost.

About time. Governance in a democracy is like a fishbowl, everyone must know the truth. But under Modi opacity rules, or as Salman Rushdie would say, there is a lot of chutnification going on. But truth does ultimately win.