Why Pakistan election could be Imran Khan's last shot at power

The PTI chief at 65 doesn’t have time to waste, and much to change.

Imran Khan is so much in news all the time it is an enigma how he doesn’t overdose on his own image and voice. From the time he was a cricket giant to now as a 65-year-old politician who has never been in power, Khan could be blamed for a number of things but there is one thing he could never be accused of: being irrelevant. Supported, followed and loved by millions, Khan, unarguably the most famous person in Pakistan, is that beguiling amalgam of the good and the imperfect that he finds himself to be a subject of reverence, admiration, mockery and anger any hour of the day, without a break, without a doubt. Khan has remained strictly no-comments about the yet-to-be-released book by his former wife, Reham Khan.

Khan was, and Khan is, one of a kind, and that makes him a very interesting study of a public figure, a mainstream politician and a formidable entity that despite being pooh-poohed by his opponents as a political non-entity is regarded as that constant pain-in-the-body who wouldn’t let anyone corrupt (in his words) rule in peace.

I mean how many politicians do you see who in the first two scorching, roza-blessed weeks of June have been in headlines non-stop for stuff that is non-political? And that by the way is in addition to the political stuff for which he is hailed and scorned in equal measure any given day.

First there was the hoopla in media about his ex-wife’s book, tagged as a tell-all, the alleged contents of which paint Khan as the reincarnation of Damien of Omen fame-meets-Mr Hyde-meets-Kevin Spacey’s Frank Underwood.

While Khan remained strictly no-comments about the yet-to-be-released book that he considers nothing more than a trifle, much has been discussed in media on both sides about the alleged contents of the book that attacks Khan’s character and his political choices. Interestingly, the upcoming book has failed to register much interest in the awaam who are more concerned about their day-to-day issues than the alleged debauchery of someone they idolise as a human being who despite being larger than life is also known for his weak points and errors of judgement.

Along came the news of an umra trip to Saudi Arabia, the main characteristics of which were an expensive chartered plane; a close friend, Zulfi Bukhari, who was on some list and was given a waiver to travel; a shoe-less Khan seen exiting from the plane in the scorching Saudi June afternoon; the new wife, Bushra Wattoo, covered head-to-toe in a veil that is more than a veil; and a religious obligation that instead of being a routine act in the last week of Ramzan became breaking news. So much for keeping your personal life under a shroud, no pun intended on Mrs Khan’s veil.

As long as people understand that her veil does not originate from any of Khan’s husbandly instructions, and all she does is of her free will, there is nothing more to be said about her choice of attire. And as long as the plane was not chartered on taxpayers’ money, it shouldn’t, ideally, be anyone’s concern how Khan travels from Islamabad to Makkah. And as long as his friend, the gentleman from the UK, has no business interests in Pakistan, is not a taxpayer here, and has not broken any law in Pakistan, it is his right to make an effort to get his name removed from any white, black or red list.

The one real issue that Khan is answerable for, in my opinion, is his allotment of party tickets for national and provincial assembly seats in the 2018 general elections being held on July 25, 2018. Travelling back in time to 2011, after the historic October 30, 2011 Lahore jalsa, Khan’s political strategy was finally what it should have been all those years since 1996 when he formed his Pakistan Tehreek-e-Insaaf (PTI): clear, strong, focused and relevant. There was just one thing missing from that stage that day: electables.

Not to be confused with delectables and the Incredibles, electables are those lucky, fantastic few who contest elections and win elections, kinda again and again. Khan had a loyal group of old PTI members who had dedicated their lives to take his political message forward, keep the party going without gaining any electoral victory, and remaining focused on Khan’s promise of a new Pakistan. Khan and his party remained unsuccessful in one election after the other. 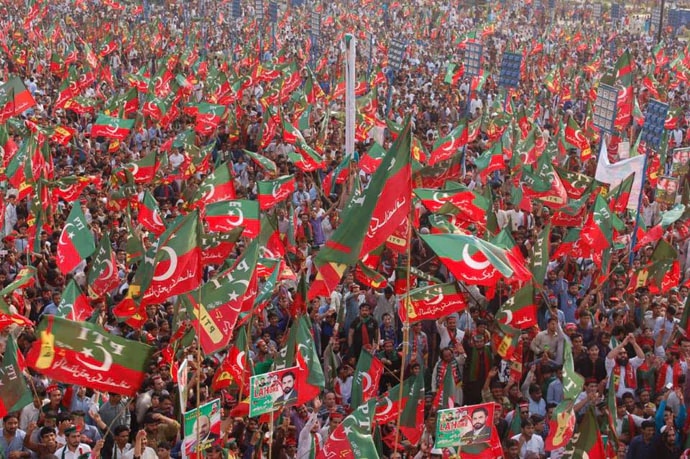 The October 30, 2011 Lahore jalsa by Khan's party had been a historic event in Pakistan.

A few very well-known faces, veteran politicians, who had been very prominent in other parties and various governments, joined the PTI, prompting a great deal of criticism from media, political observers and political parties that hated Khan’s guts more than they loved their sense of entitlement to the idea of power in Pakistan. There were some entrants whose reputations -justified or not- were almost as unsavoury as those of whom Khan vowed to remove from power once he was in power.

Not much happened in 2013, as Khan despite hopes and expectations to gain a majority failed to get any real electoral victory, with only enough seats in one province, Khyber Pakhtunkhwa, to form a coalition government. PTI became the most important party in opposition. A demand to investigate results of four constituencies, dilly-dallying of government to accept Khan’s demand, many protests and a months-long dharna in Islamabad later, things remained the way they were: Nawaz Sharif in power, Imran Khan trying to overthrow him through public protests and court decisions.

Sharif out, his party still in power, the term of government finished on time, and the caretaker government sworn in, elections are just a little more than a month ahead, and Khan is in news again for giving tickets to the electables, mostly “turncoats” and “lotas” from other parties, and not PTI loyalists. The party of change has been tainted with what it wished to rid Pakistan of. There is much to criticise in that, but then there is the bigger picture.

To an optimistic observer of politics like me, Khan believes in the power of his leadership, of his stellar example of financial incorruptibility, his devotion to the homeland he owes his entire existence to, and his singular focus to make Pakistan one Pakistan for all. Khan at 65 doesn’t have time to waste, and much to change. While remaining deeply indebted to everyone who has worked for his party and a promise to never forget their services if he gets a chance to form the next government in centre, Khan knows it is now or never.

Pakistan is facing a myriad challenges on all levels, and Khan’s belief in his own and that of his team of dedicated and highly qualified professionals is his principal motivation to give the upcoming elections his all. There may be many misgivings about his choice of candidates, but there is one undisputable fact: Khan is a leader who his supporters, party members and workers believe in without a doubt. His decisions may appear myopic and politically opportunistic but his integrity remains unquestionable. His tactics may appear shortsighted but his long-term goal is forever one: Pakistan.

Imran Khan is Pakistan: dynamic, persistent, fascinating, multi-faceted, a frequent failure, a sharp learner, a never-say-die fighter, flawed, and very human. And Imran Khan hopes that Pakistan will vote him into power in July 2018 to make Pakistan the best version of itself. A dream or wishful thinking or a reality, only time will tell.

Also read: Why should we have a political puppet in New Delhi, when Nagpur is the 'capital' of India?