Pakistani liberals advocate that the Pakistani PM should use the visit to do everything possible to embarrass India, including targeting us in his speech at the summit.

One of the most unpleasant aspects of holding any multilateral event — summit meeting, sports event or even an international conference — is that often enough it is incumbent upon the host country to invite some people who they otherwise would never allow into their country, or even seen associating with them at any level.

So, even though inviting Pakistan’s 'selected' Prime Minister, Imran Khan, to the Shanghai Cooperation Organisation (SCO) summit scheduled for later this year will be extremely distasteful for any self-respecting Indian, India will hold its nose and do the needful because of its diplomatic obligations.

Although the dates of the summit have not been announced, there was expected excitement and anticipation inside Pakistan over the prospect of Khan travelling to India. A debate of sorts has already started on whether or not he should travel to India.

One body of opinion — mostly comprising retired Pakistan Army officers and their camp followers — believes that he should not because after all his raving and ranting against India and Prime Minister Narendra Modi, his visit to India will cost him very heavy politically. The other viewpoint is that he should go to India and do the Musharraf-in- Agra sort of grandstanding. The latter view — no surprise that it is being articulated by that oxymoron called ‘Pakistani liberal’ — advocates that Khan should use the visit to interfere in Indian politics by addressing university students, meeting some Kashmiri separatist leaders and do everything possible to embarrass India, including targeting us in his speech at the summit. Of course, this lot seems to think that the entire Indian establishment will be dumbstruck by Khan presence and will let him run all over them.

Well, guess what? It ain’t going to play that way.

While India has announced that it will be inviting the Pakistani Prime Minister for the summit, it is not beyond the realm of possibility that Khan might not be in the office by the time the summit takes place. Even so, whether it is him or one of his cronies or even his political adversaries who attend the summit, India needs to be prepared for Pakistan trying something sneaky to score a few points against us.

Pakistan is looking for signs that India might be ready to reach out to it and make some peace offerings. One of the things it is watching out for is how the invitation is delivered. There is no fixed protocol on how this is supposed to be done, which leaves the field open to India to deliver a calculated snub to Pakistan and put it in its place. For instance, the government could depute either the external affairs minister or some other high functionary to personally invite all heads of government of member states.

Simultaneously, it could also depute either a medium-level official (the deputy High Commissioner in Islamabad) or even send the invitation through the Pakistan High Commission in New Delhi. Despite this snub, if Khan, or whoever is the head of government at that time, decide to visit, India will need to take the next steps. 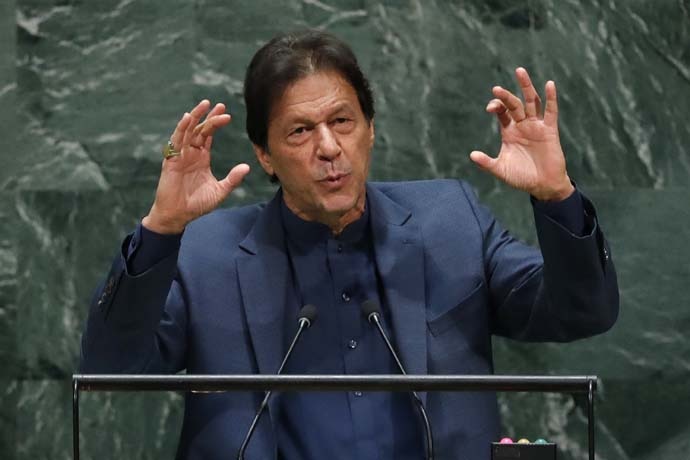 India should rip into Imran Khan’s Islamist supremacism, and his country’s terrible track record in the treatment of minorities, restricting civil liberties and crackdown on media freedoms. (Photo: Reuters)

The first step should be not to give visa to a single Pakistani journalist. In other words, the Pakistani entourage will be restricted. There is no question of allowing them to visit with a planeload of people. The bottom line is that there should be no special privileges, no special gestures, and no exceptions for Pakistan on anything at all. Even the Pakistani head of government’s programme, while he is in India, will have to be by the book. He shouldn’t be allowed to run amok, addressing public meetings, or meeting his advocates and flag-bearers in the Indian media and ‘civil’ society. Most of all, his interaction with the media must be tightly controlled.

Of course, there will be the usual suspects who will try to get an ‘exclusive’ from Khan, and someone in the government needs to work quietly, behind the scenes to curb this lot and its tendency to needlessly create hype about Pakistan. Everything India does will, of course, have to be according to protocol and diplomatically correct. However, given that Khan and his ilk have been using the vilest and most vituperative language against PM Modi and the Indian government, it is to be expected that he will use the SCO platform to once again rake up Kashmir and rail into his Indian counterpart. There is nothing that India can do to prevent this.

What India can do, however, is to take off the diplomatic gloves and rip into Khan and his Islamist supremacism, his quest for Islamic exceptionalism, his advocacy of and admiration for the Taliban and their brand of Islam, and his country’s terrible track record in the treatment of minorities, restricting civil liberties, crackdown on media freedoms and wanton violation of human rights of Pakistani citizens.

There is no need for India to pull its punches and ignore the ranting of a man like Khan. Bullies like him must be paid back in the same coin.

Also read: Why ‘declaration of war’ by Imran Khan is an opportunity for India