The Higher Call: Two tragedies, 34 years apart, in the Rann of Kutch airspace

What happens if an Air Force pilot decides to be human first, though the rules of warfare of his country mandate that no mercy be shown.

On August 10, 1999, two decades ago, a Breguet Br.1150 Atlantique aircraft of the Pakistan Naval Air Arm was shot down by Indian Air Force’s (IAF) MiG-21 fighter over the Rann of Kutch, on the India-Pakistan border. All 16 people onboard were killed. The Kargil War had just ended a month ago. However, the armed forces of both countries were on the edge and ties were frosty.

The French-built Breguet Br.1150 Atlantique is a long-range maritime patrol aircraft, performing maritime roles such as reconnaissance and anti-submarine warfare.

The aircraft took off from Mehran naval base in Pakistan and the IAF radar picked up the plane as it approached the Indo-Pak border. Two IAF MiG-21s from the Indian airbase at Naliya in the Kutch region were scrambled. The MiGs tried to escort the plane to a nearby Indian base. However, the Pakistani aircraft turned abruptly and tried to make a dash for the border. The Indian pilots were given clearance to shoot the plane down. The Atlantique was intercepted and a missile was fired at it by Squadron Leader PK Bundela.

India rebutted the claim by pointing out that the debris was found in a radius of two kilometres on either side of the border and that the intrusion took place 10 kilometres inside the Kori Creek — which is in the Indian territory. The Indian side also held that the plane violated the Indo-Pak bilateral agreement signed in 1991, under which no military aircraft were to come within 10 kilometres of the border. India also pointed out that all air forces conducted training flights in clearly demarcated training areas located well away from international boundaries. So why was a training mission being carried out so close to the border, was the Indian argument. The primary role of the Atlantique was for operations over the sea and to carry out a training flight close to the border was an indication of the plane’s use in a surveillance role.

"We never expected that he would go down immediately,” Group Captain Sanjeev Naraynen (retd), the pilot of the second MiG, reportedly recalled. “We didn’t expect so many to be on the aircraft. It was unfortunate,” he said.

Group Captain Vijay Suman Sharma, who was the fighter-controller that day, recalled, “The sky was overcast, making it difficult for the fighters to spot the intruding aircraft. Radar signatures, however, showed the aircraft was on a southerly heading, crossing Lakpath and Koteswar in the Rann of Kutch, back into Indian territory. The two fighters climbed to 2,500 meters to avoid the cloud cover and at about 2,100 meters they spotted the Pakistan aircraft. The Pakistan aircraft was about 10 kilometres inside our territory and was carrying offensive weapons. I gave them permission to engage."

On September 19, 1965, as the Indo-Pak war was ending, a Pakistani fighter jet F-86 shot down a civilian aircraft — a Beechcraft Model 18 commuter aircraft — with Balwantrai Mehta, the then Chief Minister of Gujarat on board. All eight people — Mehta and his wife, three aides, a journalist and the two young air force pilots — were killed. The plane had drifted off the course along the western border in the Kutch region, straying into Pakistani territory. Pakistan’s air command suspected the aircraft was on a military reconnaissance mission to open a new war front and the pilot Qais Hussain, after being scrambled from Mauripur airbase, was ordered by his superiors to shoot it down. A Beechcraft Model 18 similar to the Indian aircraft that was shot down in September 1965 by Pakistan Air Force. (Photo: Wikimedia Commons)

In 2011, the Pakistani fighter pilot wrote to the family of the pilot offering his condolences. In his e-mail to Farida Singh, daughter of the pilot Jahangir “Jangoo” Engineer, he said he regretted the loss of eight lives in the incident but was acting on orders. “The fact that this all happened in the confusion of a tragic war was never lost to us. We are all pawns in this terrible game of war and peace,” Hussain reportedly wrote. “It’s not an apology, it is condolence. I did not do anything wrong. I did what I was ordered to do in the line of duty. But I feel sad about the civilians who were on board that plane. It should not have happened."

"Your father spotted my presence and started climbing and waggling his wings seeking mercy. Instead of firing at him at first sight, I relayed to my controller that I had intercepted an eight-seat transport aircraft (guessing by the four side windows) and wanted further instructions to deal with it. At the same time, I was hoping that I would be called back without firing a shot. There was a lapse of three to four long minutes before I was given clear orders to shoot the aircraft."

"I did not play foul and went by the rules of business but the unfortunate loss of precious lives, no matter how it happens, hurts each human and I am no exception. I feel sorry for you, your family and the other seven families who lost their dearest ones. If an opportunity ever arises that I could meet you face to face to condole the death of your father forty-six years back I would grab it with both hands. I would highly appreciate if you please convey my feelings to the other members of your family, who were equally hurt by the untimely departure of Jungoo to the next world,” Hussain reportedly wrote in his email.

Farida, in her response, reportedly wrote, “Yes, this was the one incident which defined our lives henceforth. But in all the struggles that followed, we never, not for one moment, bore bitterness or hatred for the person who pulled the trigger and caused my father's death. The fact that this happened in the confusion of a tragic war was never lost to us. We are all pawns in this terrible game of war and peace. This incident is indeed a prime example of what damage strife and mindless battles can drive even good men to do."

"And most of all, my father would have liked that it (the letter) goes towards bringing a spark of forgiveness between our two peoples, who after all, were one."

The above two incidents were the results of collateral ravages of war. The non–combat planes were at the wrong place at the wrong time. The air force pilots on both sides have acknowledged the unfortunate circumstances in which these occurred. The pilots obeyed the official instructions, as any soldier is duty-bound to. But that doesn’t mitigate the tragedy that took place. The Indian pilots have admitted that it was unfortunate, and the Pakistani pilot expressed condolences. 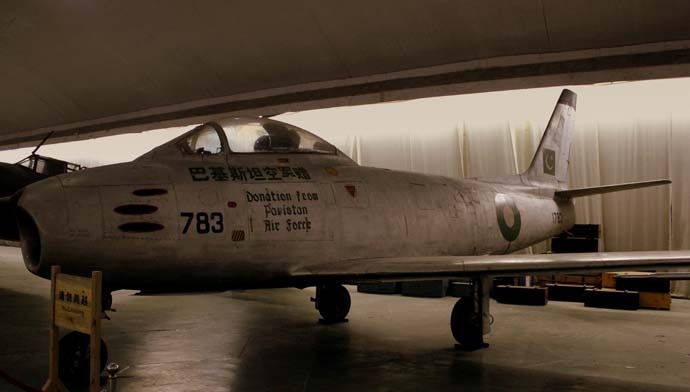 A Pakistan Air Force F-86 Sabre — similar to the one that Pakistani pilot Qais Hussain was flying on September 19, 1965. (Photo: Wikimedia Commons)

But what happens when a pilot decides to be human first and a soldier later, especially when faced with an adversary who is helpless before him, though the rules of warfare of his country mandate that no mercy be shown?

This happened during World War II, on December 20, 1943. After a successful bomb run on Bremen, 2nd Lt Charles "Charlie" Brown's B-17 Flying Fortress of the United States Army Air Forces' (USAAF) was damaged by flak. The damage slowed the bomber. Brown was unable to remain with his formation and fell back as a straggler — a position from which he came under sustained attacks by over a dozen enemy fighters. Further damage was sustained. Most of the crew were wounded.

Brown's damaged bomber was spotted by Germans on the ground, including German pilot Franz Stigler (then an ace with 27 victories), who was refuelling and rearming at an airfield. He soon took off in his Messerschmitt Bf 109 and quickly caught up with Brown's plane. Through the damaged bomber's airframe, Stigler was able to see the injured and incapacitated crew. To the American pilot's surprise, Stigler did not open fire on the crippled bomber.

Stigler tried to get Brown to land his plane at a German airfield and surrender or divert to nearby neutral Sweden twice. Brown didn't understand what Stigler was trying to mouth and gesture and flew on. Stigler then flew near Brown's plane, so German anti-aircraft units would not target it. He then escorted it over the coast until they reached open water. After ascertaining that the bomber was out of German airspace, Stigler departed with a salute. Charlie Brown and Franz Stigler who went on to become friends who were closer than brothers. (Photo: Facebook/ @FranzStiglerPilot)

Brown informed his officers about the incident. He was told not to recount this to the rest of the unit, so as not to build any positive sentiment about enemy pilots. Brown commented, "Someone decided you can't be human and be flying in a German cockpit."

Stigler said nothing of the incident to his commanding officers, knowing that a German pilot who spared the enemy while in combat risked execution.

In 1972, Brown retired from government service and moved to Miami to become an inventor. Stigler moved to Canada in 1953 and became a successful businessman.

Brown decided he should try to find the unknown German pilot, and after four years of searching, finally located him. They became close friends and remained so until their deaths.

Such incidents restore one’s faith in humanity. Two enemy pilots — one an ace, and another one in a crippled plane — during the tumult of battle, having a moment of understanding, and later becoming closer than brothers, is the stuff of legend.

Such humane moments during the war are indeed rare. They go on to show that beneath the brutal clash of weapons, the essence of humanity endures.

Post your comment
#Usa vs germany, #World War II, #1965 India-Pakistan War, #Kargil war
The views and opinions expressed in this article are those of the authors and do not necessarily reflect the official policy or position of DailyO.in or the India Today Group. The writers are solely responsible for any claims arising out of the contents of this article.