Leaders of the 10 ASEAN countries are in New Delhi to celebrate 25 years of India's ties with the southeast Asian bloc.

India extends a warm welcome to the @ASEAN leaders who have arrived to take part in the ASEAN-India Commemorative Summit (AICS) to celebrate 25 years of India-ASEAN partnership and our #RepublicDay celebrations. It is the honour of 125 crore Indians to host these eminent leaders.

Vietnam is a preferred partner for India in ASEAN. Our economic engagement has witnessed a remarkable growth. We need to redouble our efforts to reach the target of US $15 billion in bilateral trade by 2020 #PresidentKovind

Currently stationed in the Rashtriya Rangshala Camp for final touches, here's a sneak peek of the two @ASEAN tableaux which shall feature in the #RepublicDay parade for the first time ever@nsitharaman @indiatoasean #ActEast pic.twitter.com/0mF5ZhPGnd

PM Modi has kept the tradition of participating in the East Asia Summit (EAS) and India ASEAN summits by visiting Myanmar, Laos and the Philippines. This helped reduce the VIP visit gap with some of them, and the perception that India was now more politically engaged has been noticed.

The participation of all 10 leaders at the 25th India ASEAN Commemorative Summit is significant. This is not in lieu of the annual India-ASEAN Summit, but as in 2012, in addition to. Besides, this time the summit is enhanced by having all 10 ASEAN leaders as guests of honour at the Republic Day Parade which is unprecedented in its appeal and honour. In 2012, nine out 10 countries were represented at HOS/G level with the Philippines sending their vice-president. Now all 10 are expected with a Vietnamese state visit shortly thereafter.

Since 1967 and beyond, ASEAN has been a symbol of inclusive embrace of all neighbours whatever their development status or historical background. They united for peace, stability and progress and showed remarkable stability, if not spectacular progress, and created a common area for shared values and objectives. They charted the concept of ASEAN centrality in the region which allowed the emergence of the East Asia Summit, the Asian Regional Forum and their offshoots. They maintained peace among themselves effectively and created a community of 600 million people looking for their destiny along with their friends like India. 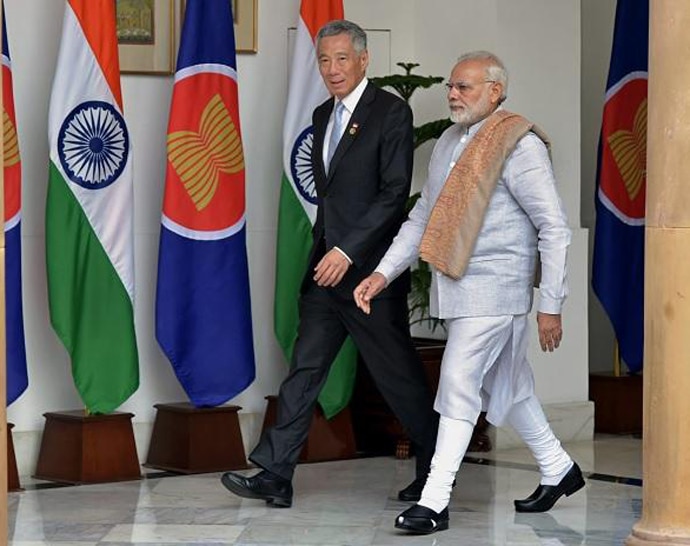 pm Narendra Modi with Singapore counterpart Lee Hsien Loong prior to their bilateral meeting on the sidelines of the India-Asean commemorative summit at Hyderabad House in New Delhi. (Credit: PTI photo)

When PM Modi meets his ASEAN colleagues in "retreat" and in summit plenary, he will transition from the shared values in a fractured world discussed at WEF Davos to a more inclusive shared values, common destiny with ASEAN leaders. This is a clear enhancement over the ASEAN-India Partnership for Peace and Shared Prosperity theme five years ago.

The Commemorative Summit of 2018 has been well-conceived with over 50 different activities at functional level implemented over the year since January last year. Beginning with an exchange of messages at level of leaders and through ministerial meetings on agriculture, defence, trade and aviation among others, we have had a plethora of engagements which have greater depth and diversity.

They have implemented several commitments of the 2012 summit and shown a real commitment to cooperation among the three pillars of ASEAN cooperation, including political, security, economic and socio-cultural. The engagements that PM Modi had at the time of the Golden Jubilee ASEAN summit in Manila last year and EAMs visit to incoming ASEAN chair Singapore, current chair of ASEAN India cooperation Thailand and to Indonesia -the largest among ASEAN countries where the ASEAN secretariat is also housed - have added heft to our policy. He met the new secretary general of ASEAN, Lim Jock Hoi, a senior Brunei diplomat, soon after he assumed office.

What is different and significant since 2012 is that the geopolitical situation in Asia has altered and both India and ASEAN have to face the disruptive challenge of an aggressive China in the region. The ASEAN response has been at two levels. While at the strategic level they have their apprehensions, and want to see other partners play a more visible role they are aware that China is more than filling the space vacated by the US in the arena. They welcome a greater role by India and Japan as well as Australia, but realise that without a robust USA engagement the status quo in the South China sea is untenable and will require ASEAN to adjust to new realities.

Thus, six of the 10 ASEAN countries have bilateral maritime engagements with India, including coordinated patrols and exercises including with the armies. India's presence is also welcomed in the ASEAN Defence Ministers Meeting - plus (ADMM-plus) besides the Shangri-La dialogue, Jakarta International Defence Dialogue etc. In the last few years, India has been seen more regularly at these fora and in the seas around them. Several have participated in the Indian Ocean Rim Association (IORA) with greater vigour and paid attention to the concept of the Indo-Pacific, though some of them feel the concept may detract from ASEAN centrality.

At the same time, the high level of Chinese economic engagement cushions the strategic discomfort with China and most ASEAN countries find accommodation easier to accept than confrontation. The policy changes adapted by the Philippines under president Rodrigo Duterte is case in point.

They do realise that its taken ASEAN a decade to move from a declaration on a code of conduct in the South China Sea to a negotiation and such imperceptible change is publicly believed to be a positive development.

In this comparison, the ASEAN countries, will clearly look for India’s steady maritime activity and visibility to be matched by bigger economic participation.

On India’s part, we have a history of positive engagement with ASEAN countries emanating from people to people, socio-cultural and trade links. These need much strengthening, reiteration and addition through connectivity and political strategic commonality. It is a welcome move that the summit will focus on these aspects while highlighting our success in other pillars.

There is no doubt that the India ASEAN Commemorative Summit will be a landmark one for its optics, appreciation and celebration. The enthusiasm for better implementation of projects at home will be a beacon for us in the ASEAN countries. Our functional and soft strengths like IT, startups, human resource development skill development and vocational training have all been well conceived and implemented.

The time now is for making these an effective part of a more contemporary partnership.

#Modi, #South china sea, #India, #ASEAN
The views and opinions expressed in this article are those of the authors and do not necessarily reflect the official policy or position of DailyO.in or the India Today Group. The writers are solely responsible for any claims arising out of the contents of this article.