The failure to disclose the number of dead soldiers and honour them will not go down well with either their relatives of the soldiers or with the PLA veterans.

By not initiating a full-scale propaganda offensive against India thus far, Beijing is keeping its options open. Chinese President Xi Jinping has not once since May 5, referred to the build-up of tensions on the Line of Actual Control (LAC). Foreign Minister Wang Yi mentioned it only at the time of the incident at Galwan Valley. Neither of them mentioned it even during the week-long session of the National People's Congress — China's version of a parliament.

At the same time, China is attempting to portray itself to its people as the "injured" party and if, or when, China launches a military offensive, Beijing will call it a "counter-attack in self-defence". Chinese-owned foreign outlets have, however, been publicising China's version of the causes for tension at the border. Chinese President Xi Jinping has not once since May 5, referred to the build-up of tensions on the Line of Actual Control (LAC). (Photo: Reuters)

As China massed its forces at multiple points along the 1,100 kilometres of the Line of Actual Control (LAC) from early May, Beijing simultaneously banned all Chinese media from reporting on the People's Liberation Army (PLA)'s build-up. Social media platforms like WeChat have similarly been instructed to censor posts with the hashtag India-China or LAC. Except for the Chinese Communist Party (CCP)-owned English media — Global Times, which by June 30 had published 20 articles on India-China relations and the situation at the LAC, no articles were noticed in major official newspapers like the PLA Daily, Guangming Daily and others. The official news agency Xinhua reproduced the statement of the PLA Western Theatre Command and the Chinese Foreign Minister's remark of June 17 to maintain peace on the border. The English newspaper China Daily published a solitary editorial titled 'Jingoism only aggravates border folly' on June 28. The People's Daily reproduced the PLA Western Theatre Command's statement and a report on the Russia-India-China trilateral, but omitted External Affairs Minister S Jaishankar's remarks.

The ban, however, does not seem to apply to Chinese academics and strategic analysts — probably all CCP cadres — who are being quoted by the Global Times and the Hong Kong-based South China Morning Post. With an active social media, despite China's firewall, news of the tensions and particularly the bloody clash at the Galwan Valley have undoubtedly filtered through to the Chinese people. Within two days of the clash, a Chinese journalist in Beijing said five officers and 11 soldiers were killed. Relatives of soldiers posted messages on Weibo asking about their welfare and urging them to come home. Other reports claimed that the PLA authorities had quietly sent the urns containing the ashes of the dead to their homes with instructions to keep the funerals private. Separately, in the last week of June, a blog which originated in Hong Kong and is circulating on China's social media listed the names of 35 PLA personnel killed at the Galwan Valley. 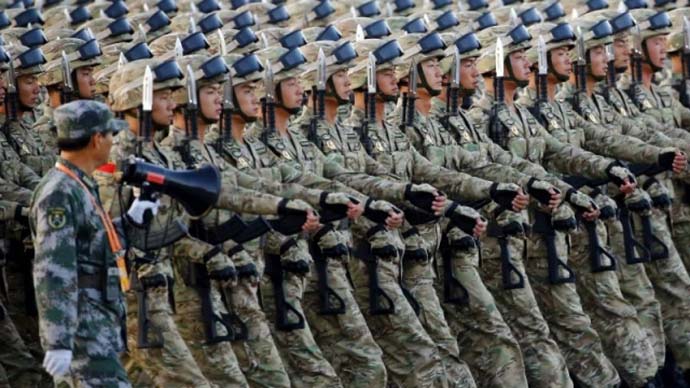 The failure to disclose the number of dead soldiers and honour them will not have gone down well with their relatives or with the veterans. (Representative photo: Reuters)

China's leaders have for the past few decades focussed attention on building a modern, lethal army capable of effectively deterring the United States. Successive Chinese leaders, especially from the time of Jiang Zemin who took over as China's President in 1993, have lavished funds and attention on the PLA with Chinese President Xi Jinping further elevating its importance and regularly urging it to train to "fight and win" wars. China's leadership is also sensitive to the feelings of the already restive 57 million PLA veterans and ex-servicemen, who have staged demonstrations demanding better remunerations, rehabilitation and "respect" in society.

To redress their problems, China last year established the Ministry of Veterans Affairs and launched a campaign to honour ex-servicemen by giving them special privileges and affixing 'honour' plaques outside their homes. The failure to disclose the number of dead and honour them will not have gone down well with their relatives or with the veterans. They would have noted that in sharp contrast India promptly disclosed the number of its casualties and publicly honoured its dead soldiers who lay in flag-draped coffins.

Meanwhile, Lin Minwang, Director of the Centre for South Asia Studies at Fudan University, was quoted by South China Morning Post on June 14 as saying, "It is impossible for India and China to resolve the border issue for now. The only practical thing to do is to manage the conflicts.” He also wrote an article in a PLA publication on June 22. Referring to the June 15 incident, he observed it is the first such incident between China and India in 45 years and "may affect the overall development of Sino-Indian relations for a long time". He said China has been low-key and maintained the utmost restraint and has not yet announced its casualties.

Reiterating Chinese statements accusing India of crossing the LAC and insistence on fixing the blame on those responsible, Lin Minwang said, "As the truth emerges, China should also consider public homage for the Chinese officers and soldiers killed or injured in the conflict. Although so far, China has not stated whether there are any casualties. However, it is impossible for China to have no causalities in such a deadly conflict. India has held a funeral for the casualties on June 18. Indian soldiers wrapped in their flags were taken to their homes. The burial coffins were covered with Indian flags. Many of their officials paid tribute to them. China should pay more tribute to the people who sacrificed to protect the territorial integrity of their country, although we do not need to show nationalist sentiment like India.”

The admission recently by China's Ambassador to India and the Global Times on the Chinese casualties is an indication that the Chinese leadership might be preparing to give in to the popular demand and disclose the number of PLA casualties. Hu Xijin, the editor of Global Times, tweeted on June 26, that "the dead have been treated with the highest respect in the military, and that information will eventually be reported to society at the right time so that heroes can be honoured and remembered as they deserve.”

Mindful of the intense domestic criticism over the past year, the Chinese leadership is probably currently discussing the announcement of the casualties. The actual numbers are probably being calibrated to cater to the nationalist sentiments in China and ensure that Xi Jinping's image is not dented because of his close association with modernisation and strengthening of the PLA.