On an examination of the documents, most impartial observers will come to the inevitable conclusion that the RSS was right about China and the Congress was wrong.

Allergic as many in the left-liberal former establishment may be to the Rashtriya Swayamsevak Sangh (RSS), the latter’s assessment of the Chinese aggression is worth paying attention to. But such was the Congress propaganda against the RSS that its views, let alone being considered seriously, were deliberately ignored.

So for all these years, most Indians were kept entirely in the dark about early warnings received from the RSS on China. On an examination of the documents, most impartial observers will come to the inevitable conclusion that, once again, the RSS was right about China and the Congress wrong. First, briefly, let’s look at just how wrong the Congress was. It is well known how our first Prime Minister, Jawaharlal Nehru’s rose-tinted and utterly delusional notions of Indo-Chinese friendship were shattered by China’s 1962 war with India. It is said that he died a broken and disillusioned man following this debacle. Nehru imprudently ceded both territorial and diplomatic advantages to China as a result of which India lost 38,000 square km (14,700 square miles) of territory in Aksai Chin in the 1950s. Since then, some 680 sq km according to some estimates, were lost during the last two UPA governments (2004-2014).

One of Nehru’s greatest blunders was to pass up in favour of China our one and only early chance of being a permanent member of the UN Security Council. His ambitions to play a bigger role on the world stage as the leader of a pan-Asian coalition against the imperialist West made him completely misread the fire-breathing dragon next door. Congress carried on his policy of appeasing China. Is it any surprise, then, that deals between the Congress and the Communist Party of China or funding from Chinese entities to the Rajiv Gandhi Foundation are surfacing? MS Golwalkar warned as early as 1951 that “China is expansionist by nature and there is every possibility of the Chinese committing aggression on Bharat in the near future.” (Photo: Golwalkarguruji.org)

Let us now look at the early warnings of the RSS on China. As early as 1951, MS Golwalkar or “Guruji,” the RSS Sarsanghchalak, issued a statement of importance to the press at Shimoga, Karnataka: “China is expansionist by nature and there is every possibility of the Chinese committing aggression on Bharat in the near future.” He was addressing the Chinese occupation of Tibet. He believed that Nehru had committed a Himalayan blunder, which the British had forestalled for so long.

According to CP Bhishikar’s book on him, Guruji warned of the China-sympathisers in our midst, who would act as a fifth column in the event of Chinese aggression. That is exactly what happened, with the then undivided Communist Party of India coming out in support of the invaders.

EMS Namboodiripad, senior Communist leader and former Chief Minister of Kerala, wrote: “We are not prepared to become blind to the reality that it was the class policy of the … ruling classes of our country that made them allies of the Tibetan counter-revolutionaries, thus initiating the process of deterioration in the India-China relations. We were and are not prepared to give up our view that the responsibility for the Chinese offensive of October 1962, should be shared also by the Indian ruling classes who adopted a very provocative attitude in the weeks preceding the Chinese onslaught.”

On December 23, 1962, after India’s defeat, Guruji in a speech at the Ram Lila Maidan, said, “I regret to say that despite repeated warnings, the Government preferred to ignore such a grave possibility. …Even an ordinary person like me had, nearly ten years ago, referred to the systematic efforts the Chinese were making to enter our territory and entrench themselves in it. … But our leaders were so lost in the goody-goody slogans of world-fellowship, Hindi-Cheeni Bhai Bhai ...that they did not even think of addressing themselves to so serious a problem as this” (Shri Guruji Samagra, translated from Golwalkar’s collected works in Hindi, vol. 10, pp 149-150). In the middle of the war, Guruji also emphasised that “we must establish very close and cordial relationships with Nepal… if we don’t succeed in this, our difficulties are going to increase.”

How prophetic! On the 50th anniversary of the Indo-China war in 2012, the RSS passed a resolution calling for “a Comprehensive National Security Policy vis-a-vis China” in Chennai during its Akhil Bharatiya Karyakari Mandal (ABKM): “It is universally acknowledged that the debacle of 1962 was essentially the making of the political and diplomatic leadership of our country…” Even more perceptively, it pointed to the huge Chinese build-up of on the border, including “a network of airbases, missile launching pads, cantonments, and other physical infrastructure.”

The resolution demanded setting up a Mountain Strike Corps in addition to “comprehensive military technological superiority.” It warned against China’s “deep penetration…in sectors like energy, information and communication technology, industry and commerce in Bharat and its designs to divert our river waters.” 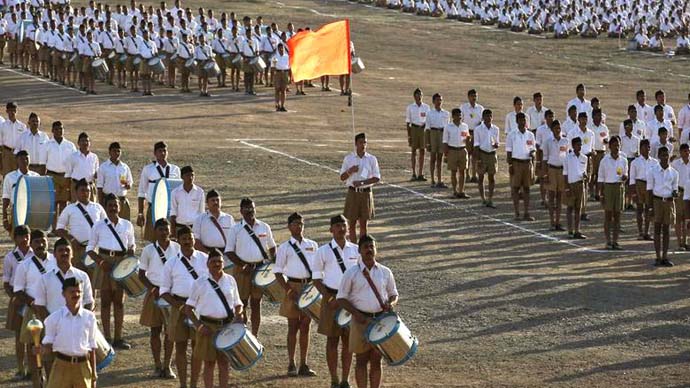 Such was the Congress propaganda against the RSS that its views, let alone being considered seriously, were deliberately ignored. (Photo: Reuters)

Not just that, the ABKM also underscored “the threat from China in the field of cyber technology and communications.” Perhaps, the only thing not anticipated was the possibility of a virus attack! Why was such a comprehensive and insightful report ignored? Only because of Congress’s deep prejudice and phobia of the RSS. Better late than never for these facts to come to light. We can be sure that the present government will not make the mistake of ignoring them.