Developments in the Korean peninsula have also worried China.

Chinese President Xi Jinping is a princeling: his father Xi Zhongxum was a senior political leader in the People’s Republic of China (PRC). Indian Prime Minister Narendra Modi comes from a humbler background, but the two men have one quality in common: ruthlessness.

The Modi-Xi bilateral in Wuhan marked only the opening move in an elaborate chess game between the duo.

Afghanistan is the chess board.

Xi wants India to join the Belt and Road Initiative (BRI), though China’s vice-foreign minister Kong Xuanyou said in Wuhan, “China won’t force it on India to or be too hard on it.”

Without India’s participation, however, the BRI will lack legitimacy. Kong’s statement is, therefore, more pragmatic than definitive.

Enter Afghanistan. Xi knows that the United States is already encouraging India to play a larger economic role in Afghanistan. The decision by Xi and Modi to work jointly on economic projects in Afghanistan satisfies three Chinese concerns and two Indian ones.

First, India-China infrastructure projects will indirectly draw India into the BRI which, as Xi announced late last year, will extend to Afghanistan.

Second, for that to happen, peace must return to Afghanistan with the Pakistan-sponsored Taliban joining an Afghan coalition government at some stage. The China-Pakistan Economic Corridor (CPEC), part of the BRI, already faces security threats from Baloch insurgents. Restoring peace in the region is therefore key to BRI’s success. India’s economic role in Afghanistan, now backed by China, can help.

Third, a deeper economic partnership in the region between India and China will, Xi hopes, help wean India away from the US orbit of influence. Xi is keenly aware that by 2030 the world’s three largest economies will be the United States, China and India. In this geopolitical triangle, China and the US will form the two largest angles and India the smallest. But though the smallest, India will be the swing power. Whoever it aligns with – China or the US – will have the edge.

NSG membership and designating Masood Azhar as a global terrorist will form part of the agenda of future Modi-Xi meetings.

Xi sees US-China rivalry in Cold War terms. As this century unfolds, India will increasingly play, in this new Great Power rivalry, the role Britain played during the Cold War between the US-led West and the Soviet Union. With Britain, an emasculated power, and Europe, entrapped in pacifism, India is the only regional power with a large economic and military presence that the US can rely on to counter China. Hence comes the carefully crafted change in India-US joint statements, highlighting the Indo-Pacific rather than the Asia-Pacific, giving prominence to the Indian navy’s strengths in the Indian Ocean Region (IOR). It is a doctrine that conflicts with Xi’s ambitions in the region.

Xi knows that India and the US are developing a strong strategic military partnership. That is why he played the “pan-Asian” card with Modi. In Wuhan, Xi spoke emphatically of China and India as Asian powers building a “globalised and multipolar world” together.

As a shrewd strategist, Modi sees two benefits from Xi’s gameplan. The first is neutralising Pakistan. While Xi has his own geostrategic reasons for drawing India into a pan-Asian orbit, Modi knows that joint India-China economic projects in Afghanistan will cool Pakistan’s fevered opposition to India’s growing role in a country Islamabad has long coveted as part of its strategic depth theory.

The second benefit for India in Xi’s new overtures is that a joint India-China co-operation lowers the temperature on the eastern front. With India’s military still under-equipped to fight a two-front war, a modus vivendi with Beijing will help the Indian Army focus on counter-terrorism operations in Jammu & Kashmir and infiltration of terrorists across the Line of Control (LoC).

Will Pakistan buy into the emerging India-China entente cordiale? Clearly not. But it may have little choice. Geopolitical alignments are changing rapidly. China and the US are locked in a trade war. China’s exports to the US are over $500 billion. China’s imports from the US, at $170 billion, are only a third of that. Beijing is, therefore, vulnerable to punishing trade tariffs that US President Donald Trump has threatened to impose.

Developments in the Korean peninsula have also worried China. The meeting last week between South Korean president Moon Jae-in and North Korea’s Kim Jong-un came as a result of US, not Chinese, pressure. The proposed Trump-Kim summit will sideline China. Beijing has been ruled out as a venue. Mongolia or Singapore is likely to be the venue for the historic summit.

As Jane Perlez wrote in The New York Times: “China finds itself removed from the center of the rapidly unfolding diplomacy, and is unusually wary about Mr. Kim’s objectives in reaching out to his nation’s two bitterest enemies (South Korea and the United States). With events moving so quickly, and Beijing finding itself largely left on the outside, analysts say China and its leader, Xi Jinping, must at least consider what they called worst-case contingencies. The loss of prestige is a big problem for China and Xi, who wants everyone else to view China as an essential actor of international relations. So China fears the outcome could be either a North Korea or a unified Korean Peninsula leaning toward the United States.” 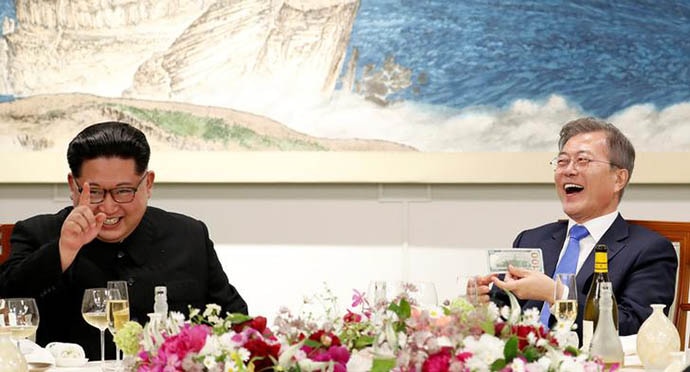 A unified Korea could be a nightmare for Beijing

A unified Korea could, despite Xi’s endorsement of the peace treaty between Moon and Kim, be a nightmare for Beijing. Since the 1950-1953 Korean war, China has used North Korea as a buffer state to keep 28,000 US troops stationed in South Korea at a safe distance. A unified Korea could bring them to China’s doorstep.

Increasingly isolated and in Trump’s crosshairs, Xi’s pragmatism has compelled him to launch his charm offensive and seek co-operation with India rather than confrontation. The possibility of Doklam 2 has significantly receded.

Modi’s next move on the chessboard will be interesting. Pakistan-abetted terrorism needs to end. Membership to the Nuclear Suppliers Group (NSG) and designating Masood Azhar as a global terrorist will form part of the agenda of future Modi-Xi meetings.

The balance of power between Beijing and New Delhi has shifted subtly. Both Xi and Modi know that Afghanistan is where the winning moves in this elaborate geopolitical chess game will be made.