How the quality of India's forests — especially in hills — is suffering

The India State of Forests Report 2017 should set the alarm bells ringing.

Would Dr Harsh Vardhan, India’s minister for environment, forests and climate change, also a medical practitioner since before he became the central minister, certify a person with haemoglobin level of 8g/dL (gram/deciLitre), or for that matter even 10g/dL as healthy? Most likely not. But apparently, as per the doctor minister, the same may not be true for forest cover, especially the type of forest and forest cover density — important parametres for assessing the health of our forests, the country’s veritable lungs that keep us alive.

On Monday, February 12, 2018, the doctor and his team that released the India State of Forest Report 2017, patted their backs for an apparent increase in the forest and tree cover only and largely chose to ignore the weak points as large parts of India lost very dense forests, as was evident from comparison with the previous assessment.

What the India State of Forest Report 2017 found

** There has been an increase of 6,778 sqkm of forest cover at the national level. (After considering the changes during two assessments – 2015 (updated) and 2017).

But a closer look at the report tells us that not all forests are healthy. It sounds more like number jugglery. 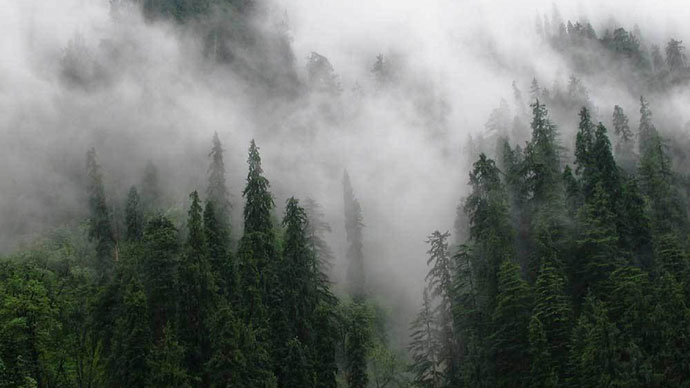 May the forest be with you. Photo: PTI

Bah! So much for quality of forests!

As rightly pointed out by this June 2016 report titled “Why Defining a 'Forest' in India Is Harder Than It Sounds (And Why That Matters)”, the “Prime Minister’s Office (PMO) has been involved in a tussle with the Tribal Affairs Ministry over the question of the Forest Rights Act (FRA) as well as the rights of forest-based communities. The Environment Ministry has been an instrumental part of this battle by reinterpreting the FRA and paving the road to doing away with consent, on multiple levels, from ‘gram sabhas’ (village-level governments) before chopping down India’s traditional forests”.

The debate is not settled yet.

What is more is minister Harsh Vardhan said, “We are 10th in the list of top forest cover countries. When the world over, there has been a decreasing trend in forest cover, India has witnessed an increase. The other nine countries have a population density of about 150 persons compared to India’s 350 (population density). This is important.”

But as is very clear from a research paper by D Venkateswarlu, an IFS officer from Jharkhand, as part of his assignment for his course at TERI University, each country has its own definitions of what constitutes forests.

The European Commission has defined forestland as having at least 20 per cent canopy closure (10 per cent in the Mediterranean forests) and a minimum area of 0.5 ha (1 ha = 0.01Sq. KM); Brazil defines forest as an area of land greater than one hectare, with more than 30 per cent canopy cover and a minimum tree height of five metres; USA’s Forest Service says forest land includes land at least 10 per cent of which is stocked by trees of any size, or land formerly having had such tree cover that will be naturally or artificially regenerated; Canada says forest land is constituted by areas of land where tree canopies cover more than 10 per cent of the total area and the trees, when mature, can grow to a height of more than five metres. China, on the other hand, says forest is “a land having a minimum area 0.67 ha, minimum crown cover of 20 per cent and a minimum tree height of two metres”.

Clearly, even when India finds a place amid the first 10 countries, by definition, our forests do not compare qualitatively with other forests. But this fact about what is it that they call a forest does not find mention in the current report.

Most worrisome is the situation in high altitudes and northeastern areas:

** The total forest cover in the northeastern region is 171306 sqkm, which is 65.34 per cent of its geographical area in comparison to the national forest cover of 21.54 per cent.

** The current assessment shows a decrease of forest cover to the extent of 630 sqkms in the NE region.

** All altitude zones above 1,000 metres (approximately 3,800 feet) have registered a small decrease in forest cover as against those below 1,000 metres, which show an increase.

As many as six states of the northeastern region showed a negative change as compared to 2015 assessment. Arunachal Pradesh (-190), Meghalaya (-116), Mizoram (-531), Nagaland (-450), Sikkim (-9) and Tripura (-164) showed negative change while only Assam and Manipur showed positive changes.

When it came to the alarmingly decreasing numbers from the northeastern states, Dr Harsh Vardhan said: “The NE already has 70 per cent of forest cover. We will go into the nitty-gritty and look into the reasons and all positive, corrective measures would be taken.”He also said, “We will treat it as a blessing in disguise and deal with it accordingly.”

But then, neither did the minster nor the Forest Survey of India (FSI) officials have a clear idea as to what could be the exact reason. Saibal Dasgupta, DG, FSI, said, “Jhoom cultivation can be one of the reasons for the decrease in forest cover in the NE. We will try to increase the livelihood options (for the people of the NE).”

When asked if the increasing rate of development projects in the northeast that need cutting down or drowning of forest – such as highways, hydropower projects or industries, could be a reason – the officer, however, said the department did not have segregated data on diverted forest land and land under jhoom cultivation. The picture is especially scary as most of the forests in the hill states of northeast belong to indigenous communities, leading to the obvious question: who is usurping them?

Now, to understand what “a small decrease in forest cover” means:

Clearly, what the report and even the minister termed as “small decrease” for areas above 1,000 metres (3,800 feet and above) is not as small as they want you to believe. The areas above 4,000 feet are the Himalayan ranges that give birth to the majority of our rivers. Forests are vital for the survival of these rivers and the negative decrease (- 217, -193, -76 and -99) for all ranges above 1,000 metres should set the alarm bells ringing in the Himalayan states.

They are already bearing the brunt of climate change witnessing decreased snowfall in winters, increased temperatures and drier atmosphere every passing year.

Water bodies inside forests and bamboo find a separate mention in the India State of Forests Report 2017 for the first time.

As per the latest assessment based on comparison of satellite images from 2005 and 2015, water bodies inside forest cover have increased by 2,647 sqkm during the last decade. Maharashtra (432 sqkm), Gujarat (428 sqkm) and Madhya Pradesh (389 sqkm) are the top three states that have seen a spike in water bodies within forest areas. Nearly all the states have shown progress in terms of the growth of water bodies, the report said.

After recently changing the definition of bamboo as “grass”, compared to the earlier definition of “tree”, the government plans to emphasise more on bamboo’s ecological and economic value. For the first time, bamboo finds mention as a separate chapter of India State of Forest Report 2017 even though it was always an integral part of National Forest Inventory.

Instead of regular comparison with 2015 data, as done in other cases, for bamboo, the report compares earlier estimates of 2011. As per those estimates, the total bamboo bearing area in the country has increased by 1.73 million ha. At the national level, the total number of culms has been estimated to be 28,103 million.

As compared to the estimate of ISFR 2011, there is an increase about 19 million tonnes equivalent green weight of bamboo observed in the present assessment.

Also read: Rise in temperatures is threatening the survival of Himalayas

#Ecology, #India, #Forests
The views and opinions expressed in this article are those of the authors and do not necessarily reflect the official policy or position of DailyO.in or the India Today Group. The writers are solely responsible for any claims arising out of the contents of this article.