Why India needs to talk tough with ministers from Maldives

The Modi government needs to make it clear to Malé that it shouldn't play the China card in its dealings with New Delhi.

The Maldivian regime under President Yameen Abdul Gayoom has changed gears and reached out to the Indian government to repair bilateral relations in the right earnest. The Gayoom government would be sending its foreign minister Mohamed Asim and defence minister Adam Shareef to India later this month.

The proposed dates of Asim and Shareef's visit are January 11 and January 16, respectively. The two visits would be important events for the India-Maldives bilateral relations and a major diplomatic bid by the Gayoom government to build bridges with India after a series of unsavoury episodes.

Currently, the India-Maldives relations are frigid on account of a host of incidents in the recent past such as Maldives signing its first-ever Free Trade Agreement (FTA) with China despite its avowed "India-first" policy, the Maldivian media owing allegiance to President Gayoom severely criticising India in general and Prime Minister Narendra Modi in particular, and restricting Indian envoy Akhilesh Mishra's movements in Maldives. President Gayoom is dispatching his foreign and defence ministers to India in a last-ditch effort to mollify India, greatly hurt by a series of provocations from Maldives, some of which have been mentioned above. Though these ministers would obviously be meeting their Indian counterparts, Sushma Swaraj and Nirmala Sitharaman, their main agenda would be to meet the big man himself, PM Modi.

The course the relationship between the two countries takes would all depend on whether Modi is willing to meet the two senior Maldivian ministers. If he does so, it would be construed as a big concession from India and denote that the Modi government is willing to forgive and forget. But as of now the indications are that Modi won't give them an appointment, citing his busy schedule considering that the budget session of Parliament is scheduled to begin from January 29, with the tabling of the Economic Survey. The MEA has confirmed that the Maldivian foreign minister will be calling on PM Modi on January 11 evening.

Significantly, Maldives happens to be the only neighbouring country which Modi hasn't visited. He was scheduled to visit the country in March 2015 but cancelled the trip at the last minute after the Gayoom government arrested former president Mohammed Nasheed, a friend of India, under trumped up charges of terrorism and sedition. Since then, India-Maldives relations have been strained.

What has greatly upset the Modi government is that the Maldivian media known to be have allegiance with President Gayoom, has criticised PM Modi for his pro-Hindu politics and called him names. Maldives, a tiny nation with a population of just about 4 lakh people (in contrast Delhi's Karol Bagh has a population of over 5 lakh), is a hundred per cent Muslim nation.

The Maldivian Opposition is watching the developments closely and doesn't want Modi to meet the Maldivian ministers.

India would be giving a mouthful to the visiting Maldivian ministers over the issues mentioned above and would like to know what concrete actions the Gayoom government has taken or proposes to take in the near future to take care of Indian interests and sensitivities.

For example, India would like to see reversal of some India-centric policies that the Gayoom government has implemented over past few weeks. India would like to have a firm commitment from Maldives that it wouldn't unleash its media to poke India in the eye. Some of the statements from Gayoom himself have muddied the waters. Gayoom has of late made several remarks at his public functions wherein he has castigated India without naming the country. The Indian position is that that such remarks, coming from the head of the government, have been too harsh and detrimental to the larger cause of good relations between the two SAARC member states. 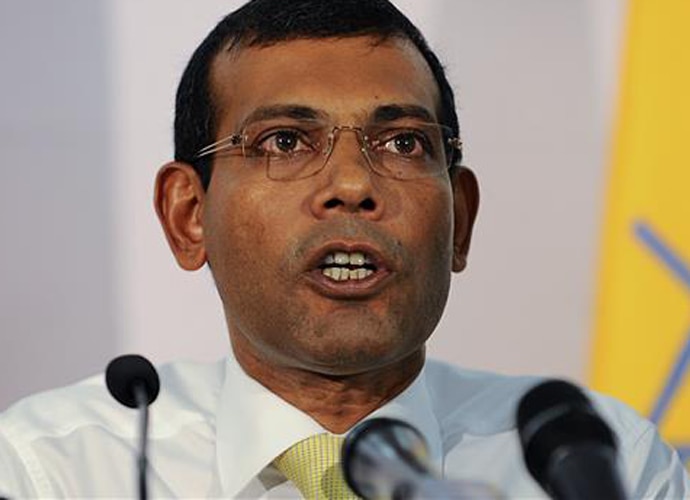 India would also like to have a commitment from the Gayoom government to have an inclusive domestic policy wherein the Opposition is taken on board, not victimised and repressed as is the trend. India would like to have an assurance that Maldives won't do anything to gag democracy and accord due space to the Opposition given the Maldivian presidential election are due in about eight months.

The biggest talking point of India will be to convey a message that Maldives shouldn't play the China card in its dealings with India, something which another SAARC nation Nepal has been doing for decades.

While India cannot tell Maldives not to have close relations with any foreign power, including China, New Delhi would be making it clear that Maldives would be playing the China versus India strategic game at its own peril. India is quite upset over the fact that while its envoy in Maldives Akhilesh Mishra is having his movements severely restricted, the Chinese ambassador is being given a special treatment.

India is concerned over the manner in which Maldives has on the one hand been wooing China but on the other hand tightening screws on India.

Under the Gayoom regime, the Chinese strategic footprints in Maldives have been growing larger and larger while India has continuously been cold-shouldered. The social media trends mirror this situation very well. For example, while workers in Maldives from other countries have been living in shanties, the Chinese have been building plush permanent structures for their workers.

But India has its own leverages with regards to Maldives, especially considering the fact that it's much closer to Maldives geographically than powers like China. Also, Gayoom is not unmindful of the Indian leverages.

That's why he is sending his ministers on a diplomatic mission. Watch this space.

Also read: Few things connect us to our families and roots as powerfully as the food we make

#Yameen Abdul Gayoom, #Mohammed Nasheed, #India-Maldives relations
The views and opinions expressed in this article are those of the authors and do not necessarily reflect the official policy or position of DailyO.in or the India Today Group. The writers are solely responsible for any claims arising out of the contents of this article.