Nepal must be made to understand that the natural affinity and affection that most Indians have towards the Himalayan country must not be stretched or tested beyond a point.

A former intelligence chief once said that the problem with India's neighbourhood policy is that India wants to be seen as the nice, cuddly, harmless giant who is more loved than feared by its neighbours. But this policy runs counter to the iron law of international politics where there is no love without fear. A harmless giant who anyone can finger without fear of any adverse consequences isn't worth anything to anyone.

In India's case, it becomes a bit of a double whammy because not only does crossing the giants' path not cause any dread, there is also no expectation of the giant pouring in goodies to win over the love and admiration of its neighbours. 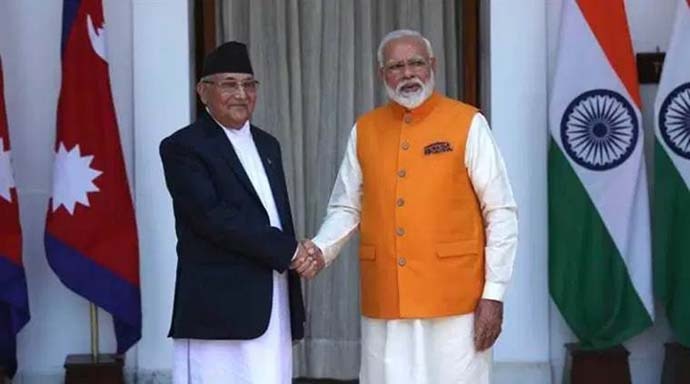 Even during the times when relations between the two countries were strained for one reason or another, things never descended to the level to which KP Sharma Oli has taken them. (File Photo: AP)

As a result, in recent years there has been a rising trend among some of India's neighbours to strike deals or do things without as much as even considering how this will be taken by India, much less the repercussions of their moves on relations with India. The ongoing border spat with Nepal needs to be viewed in the larger context of how India has conducted its neighbourhood policy.

The competing territorial claims of India and Nepal, which are behind the row that has broken out are a matter of detail which can be tackled at the diplomatic level. What is more worrisome is that Nepal's leadership has the temerity to cock a snook at India by upping the ante. The language used by the Nepalese Prime Minister, the decision to publish a new political map, setting up of armed posts near the disputed area, and making belligerent declarations of taking back the land at any cost is quite extraordinary in the context of India-Nepal relations. Even during the times when relations between the two countries were strained for one reason or another, things never descended to the level to which KP Sharma Oli has taken them.

Whatever his reasons - domestic political posturing, acting on the behest of China, or just simple deeply ingrained India-phobia - the fact is that his insurance policy with India has now more or less lapsed. For long, India has ignored his rants and adopted a rather benign approach towards him under the assumption that after he has vented his spleen, things will settle down. But that's not the way things have played out. The more India cut him slack, the more emboldened Oli got. Matters have now reached a pass where India will have to bare her fangs if she wants to remain relevant in Nepal.

In Nepalese politics, there has always been a section of people who only know about dragging India into domestic political discourses to burnish their own nationalist credentials and find some relevance. More often than not, mainstream politicians (including the erstwhile Royalty) used this section to convey signals to India. But they never really allowed these guys to cross the Rubicon. Until recently the anti-India group remained on the fringes of politics, and never really occupied centre stage, until Oli that is. The other thing about Nepal has been the quest to find a counter-balance to India. King Mahindra tried to flirt with the Pakistanis at one time. The 1971 war saw that entire gambit go up in smoke. King Birendra tried the Zone of Peace tack, but it didn't lead anywhere. The one time he flirted with China, the monarchy collapsed and democracy was restored in the early 1990s. But in recent years, the Nepalese have once again started trying to counterbalance India by reaching out to China which is sloshing money to buy support and loyalties of Nepalese politicians and consolidate the anti-India lobby. India has been watching this strategy unfold but has preferred a hands-off approach in the hope that better sense would prevail. Clearly, this policy has run its course.

A time to act

In diplomacy, patience is mostly a virtue, until it is not. That time has come for India. To be patient with the current dispensation in Nepal is to only lose more ground. In Nepal, there is a third player who is pushing the envelope every day, and India's 'patience' has made space for the third player to ensconce itself. This is precisely what happened in Sri Lanka. The Lankans gleefully grabbed the white elephant projects that China offered them. These projects have today become mill-stones around Sri Lanka's neck with consequences not only for Sri Lanka's sovereignty but also for India's security. Nepal is likely to follow a similar trajectory with the projects China is seducing them with.

There is a view that by provoking India, a trap is being set. If India falls in the trap by reacting strongly, the current dispensation will play the patriotic card and also push forward the China agenda. But even if India doesn't react, then the game will anyway slip away because the anti-India lobby will be emboldened to think that daring India is a low-risk-high-gain gambit. India still enjoys considerable leverages in Nepal which can be used quite effectively to re-establish India's primacy in the region. But this must be done quietly, without any grandstanding or chest-thumping.

Nepal must be made to understand that the natural affinity and affection that most Indians have towards Nepal - Hindu country and all that - must not be stretched or tested beyond a point. Because once this bond breaks, the consequences will be extremely serious and severe.

Also read: A new roadblock for India and Nepal