Letter from Lahore: India and Pakistan behaved like schoolyard bullies

The two neighbours need to move past their painful past of wars and a lopsided view of the significance of the other.

On superficial viewing it appears to be an old, hackneyed, jaded production of a tableau churned out many times before. The theme remains the same, the plot and subplots lack novelty, the production value is low, and the direction is as stale as last week's wholemeal bread.

Once in a while, the protagonists change faces, but the gestures, the script and the wording remain unaltered. The tableau of Pakistan and India at the annual United Nations General Assembly sessions held in New York. On what could have been an occasion to address a global audience to bring into focus the new dynamics of a G20 country and its smaller but robust neighbour, the narratives, bringing into sharp focus the undesirable hyphenation - Pakistan-India - narrowed into two words: Kashmir and terror.

I didn't hear the full speeches of Pakistan's Permanent Representative to UN Maleeha Lodhi and India's minister of external affairs Sushma Swaraj. I didn't hear the rebuttals and more rebuttals from junior diplomats from both sides. But some images captured my attention.

Lodhi, speaking earnestly, and showing a picture of a Palestinian victim instead of a Kashmiri child may have become one of the most unforgettable, albeit ironic, moments of the Pakistan-India tableau, but does it really matter? Notwithstanding the aftermath of the diplomatic gaffe, what ended up happening was a much larger discussion on victims of pellet guns in Kashmir, while India in its uncomfortable petulance, perpetuated its regular whataboutery vis-a-vis the "bad, bad Pakistan."

Swaraj's labelling of Pakistan as a land of terror, reducing its 200 million plus to a few hundred/thousand of those who form the jaishes or lashkars pledged to wreak havoc on India for wreaking havoc on Kashmir, may have won her Twitter laurels and gushing bravos of her domestic political colleagues, but does it all really matter?

Congratulations to Smt. @SushmaSwaraj on her powerful, measured and nuanced articulation of India’s stand on the issue of terrorism at #UNGA 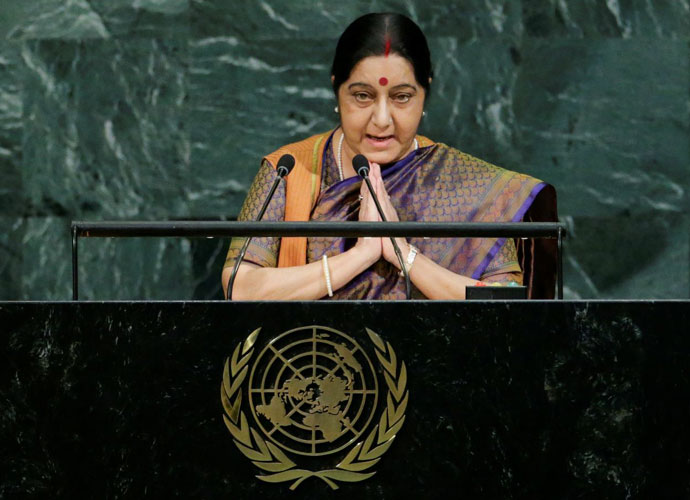 Sushma Swaraj said Pakistan had been "the world’s greatest exporter of havoc, death, and inhumanity."

Two neighbours, with a common history spanning over centuries, a painful past of wars, big and small, and a lopsided view of the significance - or lack thereof - of the other, armed with nukes that will never be used, and populations of almost more than 1.50 billion people, behold the level of their discourse on international forums. Is Pakistan the land of terror, and am I going to register my protest in hundreds of words, negating the sweeping generalisation producing one example after another of the fabulousness of countless Pakistanis?

Is this another redundant exercise in bringing forth how millions of Pakistanis are regular, peace-loving folks who go about their lives trying to find a quicker way to reach their place of work, dreaming of their children in better schools, their elderly parents getting the best healthcare available, their monthly utility bills exceeding their meager allocations from their meager salaries?

Should I mention the majestic houses, the gleaming Bentleys, the weekly trips to London or Paris, the breathlessly extravagant lives of the rich and the richer of Pakistan? Could I also bring into picture the many who have beards, murmur verses on rosaries, and pray with their shalwars rolled up, proud black marks shining on their foreheads, but have no interest in harming India or any other country? Am I here to defend Pakistan? Who is to say.

So how about I criticise India? What will it be? India's arrogant, brutal and relentless crackdown on Kashmiris? India's blatant communalisation of issues, of minority human beings-versus-cows battles? India's indifference towards the plight of Rohingya Muslims? India's millions still living without electricity and toilets? India's dark underbelly of rape, and its victims, one of them a 10-year-old fighting a battle in the Supreme Court to have permission to have an abortion to get rid of the foetus her rapist uncle put inside her?

Or heap laurels on the shining India? India's growing global power and its tremendous soft power that has admirers from one side of the globe to the other? India's many IIMs and IITs, established by former governments and eulogised by the present one? India's gorgeous film industry and the effect it has beyond borders, beyond enmities? Will the answer wander into calculated ambivalence? Who is to say.

I write in bafflement. In 2017, two countries, different in their regional and international areas of influence, remain embroiled in a war of words that is not just counter-productive, incendiary and undiplomatically supercilious, it is also a mammoth waste of opportunity to move forward.

There is no breakthrough after the latest barrage of accusations and counter-accusations from Pakistan and India. No bilateral meeting took place. No exchange of pleasantries on the sidelines made headlines. No plan to talk was unveiled. No ideas were swapped to enunciate: enough.No discussion to sign treaties for peace happened. No warm handshake, no hug melted the iciness of a stalemate that is in no one's benefit, that threatens to worsen the "enemy" status quo.

Leaders of two countries that as friends, or even simply as a civil neighbours, can formulate new regional and international power blocs, and new paradigms of influence, exchanged open barbs, trashed one another like schoolyard bullies after a football match spoiled by rain, and showed the world that is disinterested in their venom for one another that nuclear weapons, trips to space, Oscar awards, international acclaim, bullet trains, World XIs and human rights activists who share Nobel awards do not define Pakistan and India.

India is unwilling to appreciate the unlimited work and sacrifices Pakistan has put in its efforts to eliminate terror from its land, terror that killed within and without.

The onus of bad in Afghanistan and Kashmir is placed on Pakistan, and no amount of overtures and attempts from Pakistan to rebrand its image seems to have any effect on India in lessening of the hardheadedness of its condescending name-calling of Pakistan, and reducing it to the context of lashkars and sipahs.

The deafening silence is merely an exercise in diminishing Pakistan to size, to reducing it to the status of a dangerous pest that doesn't let India become the sole hegemon it aspires to be in the region.

Pakistan in its efforts to support the cause of Kashmiris for self-determination is unwilling to sugarcoat its condemnation of pellets that pierce the eyes and bodies of Kashmiris, young and old. Despite being one of the very, very few countries that notice and empathise with the pain of Kashmiris, Pakistan does not seem to have a solid grip on the reality of the situation.

How many do it is irrelevant, while Pakistan stumbles and fumbles to find its rightful place in a comity of nations where its 200 million plus people could show the world that Pakistan's very existence is not defined by those who wish to annihilate others, and that Pakistan's very future is not dictated by the past that delineates India as the enemy that persecutes Kashmiris, and wishes to see Pakistan as a failed state.

Also read: Why Pakistan was left isolated at UNGA