Just when the nation is confronted by rapidly growing threats, the funds for defence expenditure in the interim budget for 2019-20 were grossly inadequate. This must be corrected.

The defence budget proposed in the Budget speech on February 1, 2019, for the next financial year would have neither enabled the armed forces to achieve the required levels of defence preparedness, nor permitted them to undertake the military modernisation that is necessary to acquire the combat capabilities required for future wars. Quite an army: But despite the hype, the money allocated to the defence forces was much less than needed. (Photo: India Today)

The increase was inadequate to allow for the prevailing rate of inflation, the proposed hike in pay and allowances and the steep fall in the value of the rupee vis-à-vis the US dollar. (The exchange rate impacts the price of weapons and equipment that are imported. These comprise approximately 70% of total defence acquisitions). —

Other budgetary parameters too showed a downward trend.

At its peak, during the 1980s, the defence budget was 3.5% of the GDP — since then there has been a steady decline.

China and Pakistan respectively spend 2.5% and 3.5% of their GDP on defence.

No matter which yardstick India’s defence expenditure is measured by, it is among the lowest in the world.

The ratio of capital to revenue expenditure in the defence budget is far from the ideal of 50:50. (Capital expenditure is that which is incurred on new acquisitions for modernisation, the replacement of obsolete weapons and equipment and expenditure on land and buildings. The revenue budget is for expenditure on salaries, ammunition, transportation, clothing and maintenance, et al). 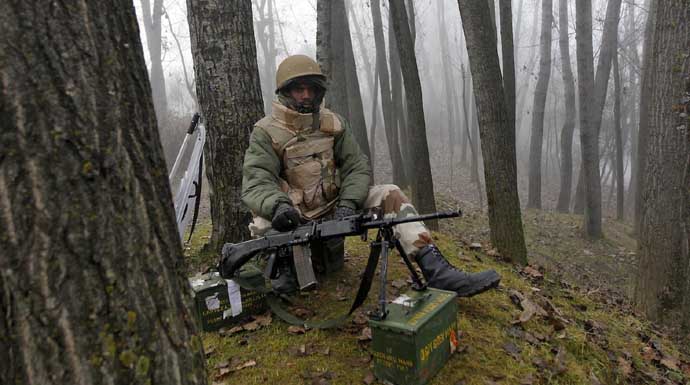 The net effect of consistently low capital budgets is that obsolescent vintage weapons and equipment in service are degrading combat efficiency and little modernisation is taking place — particularly in the army.

The worst impact is the inability to acquire precision guided munitions and to modernise the command and control and intelligence, surveillance and reconnaissance systems of the armed forces — even as the three wings of the People’s Liberation Army of China are modernising at a brisk pace.

The much trumpeted list of Acceptance of Necessity (AoN) accorded by the Defence Acquisition Council (DAC), headed by the Defence Minister of the Modi 1.0 government, for new weapons and equipment acquisition projects worth over the last five years is meaningless without assured funding support through a non-lapsable roll-on Defence Modernisation Fund, to which the budget on the capital account is added every year. The pension bill estimated for the current financial year (Rs 1,12,079.57, BE) is approximately Rs 4,000 crore more than that for FY 2018-19 (Rs 1,08,853.30 crore, BE). This is more than the capital expenditure planned for the year! Of the total pension bill, about 40% is accounted for by 4,00,000 non-combatant civilian pensioners of the MoD belonging to the ordnance factories, defence PSUs, DRDO and other similar organisations.

Urgent steps need to be taken to adopt innovative measures to reduce the costs of manpower in the armed forces, even if the number of personnel in uniform cannot be drastically reduced immediately due to manpower-intensive deployments on the LoC with Pakistan and the LAC with China as well as for counter-insurgency operations in J&K and some of the north-eastern states.

The number of civilian personnel paid out of the defence budget must definitely be reduced by privatising most of the ordance factories and other similar organisations.

Parliament’s Standing Committee on Defence has repeatedly emphasised that defence expenditure should be progressively raised to 3% of the GDP. India’s quest for “defence on the cheap” can only lead to another debacle like that of 1962. Even then, the defence budget had fallen to less than 2% of the country’s GDP.

It has been empirically proved that defence expenditure up to 2.5% to 3% of the GDP has a positive impact on the growth rate of a country’s economy — provided emphasis is laid on self-reliance through indigenous defence production.

The government must gradually provide more funds for defence to enable the armed forces to acquire the combat capabilities that are necessary to fight and win tomorrow’s wars. Simultaneously, the government must pull out all the stops to genuinely encourage indigenous manufacture of weapons and defence equipment. India’s aspirations to be counted as a regional power capable of maintaining peace and stability in the Indo-Pacific in conjunction with its strategic partners and as a nation striving for world power status, cannot possibly be realised without self-reliance in defence acquisition.

It is to be hoped that Finance Minister Nirmala Sitharaman — herself a former Defence Minister — will be more forthcoming than the previous incumbent when she presents the Budget on July 5, 2019.

Post your comment
#Defence, #Parliament’s standing committee, #Ministry of Defence, #Defence Budget
The views and opinions expressed in this article are those of the authors and do not necessarily reflect the official policy or position of DailyO.in or the India Today Group. The writers are solely responsible for any claims arising out of the contents of this article.