The US-India 2+2 Dialogue: When two plus two may not make four

The much awaited and talked about US-India 2+2 strategic dialogue will now be held on September 6, when US Secretaries of State and Defence meet their Indian counterparts Sushma Swaraj and Nirmala Sitharaman. This will be the first such dialogue between the two countries after two postponements — and it would be prudent not to go overboard with one’s expectations. This meeting is at a time when there is considerable churn in the geo-politics of the region.

As the US seeks an honourable and early exit from Afghanistan, intelligence representatives from four countries with whom US relations are at low-ebb for various reasons — Russia, Iran, China and Pakistan — met in Pakistan in the first week of July. The agenda included possible policies in Afghanistan post-US withdrawal.

All the four countries have had independent links with the Taliban as they prepare for this American withdrawal. The Russians are giving the Americans additional moments of anxiety with their largest ever tri-wing three-nation military exercise since the collapse of the USSR with China and Mongolia. The signalling to American strategists, through Vostok 2018 scheduled in mid-September is obvious. It is an indication of a new level in the Russia-China geo-political understanding.

The geo-political message to the Americans is very clear — as it should be to India. The Chinese in Kabul. (Photo: Reuters)

Americans have another related worry in the Indo-Pacific. Until the turn of the century, US military presence compared to the Chinese was overwhelmingly in America’s favour. This equation began to change in the last two decades and by 2017, the number of Chinese combat aircraft, naval vessels and missiles had begun to exceed that of the Americans in the western Pacific. American strategists now predict that by 2025, while the American presence may remain unchanged, Chinese military deployments will be such that its military capabilities will extend to the second island chain — this only confirms the American fear that the Chinese seek to replace the US as the primary power in Asia, undermine the US-led alliance systems and US credibility.

The National Defence Authorisation Act 2019 would require America's Executive branch to prepare “a whole of government” strategy while dealing with China. The intention is to safeguard US interests against Chinese industrial acquisitions, political influence and regional and global military capabilities, and that these should be with congressional committees by March 1, 2019 — this is what would be uppermost in the visitors’ minds when they meet their Indian hosts.

Indians remains concerned about growing Chinese presence in the Indian Ocean littoral as China continues with its debt-trap diplomacy. The news that the Chinese were developing the world’s new electromagnetic surface to surface rocket, that give the PLA military advantage in high altitude regions along the Himalayas and Tibet, would not be lost on Indian military planners. The Chinese scientists assert that the PHL-03 multiple launch rocket system will have a range of 650km. This disclosure comes just ahead of the India-US bilateral dialogue.

Meanwhile, China is serious about opening alternative sea routes to Europe. Chinese scientists have established an unmanned ice station in the Arctic Ocean as an observation post for ocean fluxes, sea ice and the atmosphere. This is ahead of the plans to open a sea route from Shanghai to Rotterdam taking advantage of climate changes. This would reduce the present 20800-kilometer route via the Suez by 8000km and two weeks.

Getting Nearer: Shanghai to Rotterdam will soon be two weeks closer to each other. (Photo: Hanjin Shipping)

The Danish shipping company AP Moller-Maersk Group will be sending its first container ship by end-August. North America, Europe and East Asia would eventually have new connectivity and Russia will be a key littoral. Big powers concerned with world domination would be factoring this into their calculations.

Our Americans visitors will surely be talking about terrorism and various military, trade and economic aspects of Indo-US relations, but they will be laying stress on the future Indian role in the Indo-Pacific region. They will want India to provide support and stability to the free and open order in the Indo-Pacific. The hope is that this would force China to divert its forces more thinly from the western sphere to the eastern regions. 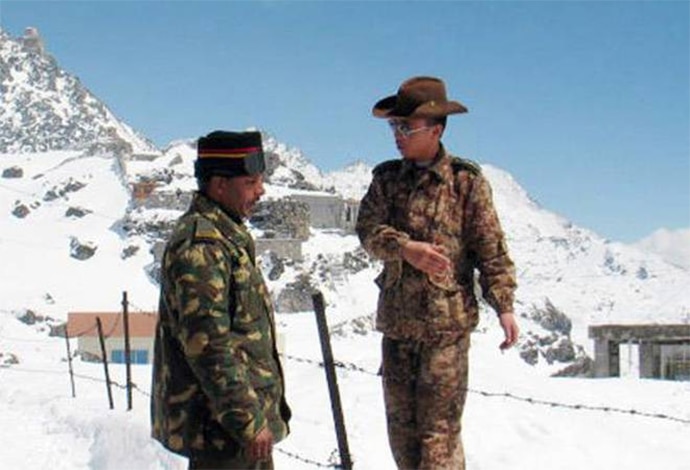 The Line Between Us: An Indian soldier stands against his Chinese counterpart. (Photo: Indiatoday.in)

Even assuming that Chinese tolerance of enhanced Indo-US military cooperation may have become higher, it is doubtful if this can be taken as a certainty. The Doklam military standoff had indicated that there were still quite a few problematic issues that could be escalated by China, should it want to test India again. Indian strategists would also be aware that while the US may want to improve Indian military capabilities discreetly, it is not going to get directly involved in any operations with India.

The US must also understand that Indian security interests are to its east and west and that the Indian Ocean is now going to be the new security frontier with an increasing Chinese presence. By simply concentrating on the South China Sea, the US is losing valuable space to China elsewhere. 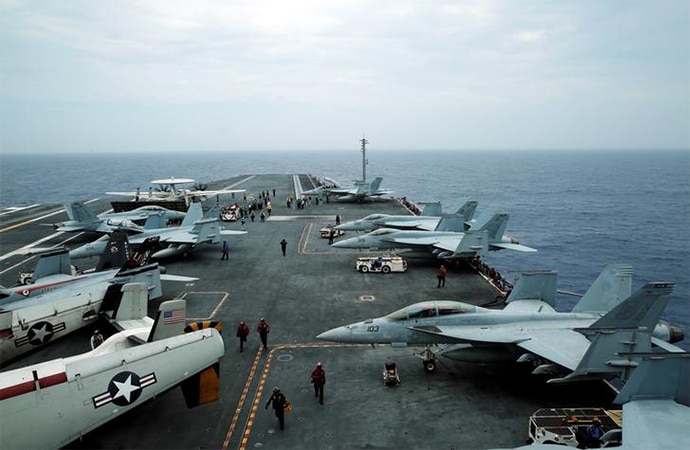 Other than that, the implications of CAATSA on India’s relations with Iran and Russia will presumably be discussed. The understandable Indian concern would be how far would CAATSA affect India-US defence and security cooperation and even though waivers might be available; this does add an uncertainty to the relationship.

The US has been keen that India should sign the “three foundational” agreements to enable enhanced defence cooperation; this is most certainly going to be an issue that will be discussed. The three accords — Logistics Support Agreement (LSA), Communications Interoperability and Security Memorandum of Agreement (CISMOA) and Basic Exchange and Cooperation Agreement (BECA) — are fundamental to any US military cooperation but have clauses that make Indians apprehensive that their security interests would be at risk.

Although the first two have been modified to suit Indian reservations, the US is likely to insist on the original agreements.

This will have to be resolved to mutual satisfaction.

Today, resident nations from the Arctic to the Indian Ocean and from the Suez to the Sea of Japan jostle for power and control in Asia. There is one non-resident player. Can it triumph over the other players? Surely, this thought will feature strongly in the minds of all four leaders when they meet shortly.