What India needs is sensible but sweeping reform; what India is getting is Soviet-style targets for the bureaucracy.

Signs that the economy is going south have been flashing for some years now. But all suggestions and criticisms regarding the economy were greeted by apparatchiks, apologists, advocates and adherents of the ruling dispensation by a combination of denial and hubris.

That many of the critics were also beneficiaries of the ancien regime didn’t help matters. Given their pathological hatred for the PM Narendra Modi-led dispensation, their criticism was seen as more political than economic. But many people with no axe to grind against the Modi government, and who actually wanted to see it succeed were also sounding a note of caution on the direction the economy was headed.

But the stock response was to ignore them after accusing them of ignorance or prejudice or even an agenda. The bottom line is that there was a deep aversion in the ruling party camp to paying any heed to bearers of bad news on the economy. However, ultimately the truth will out. Startling numbers of how industrial production was falling, how inventories (especially in the auto sector) were rising and forcing companies to close factories for days and lay off workers, started pouring in, culminating in the distressing news that growth was down to 4.5 per cent.

To be fair to the government, within weeks of the disastrous budget presented in July, some corrective measures were taken, including a significant cut in corporate taxes. But the reforms still don’t go far enough or deep enough.

If anything, they are tentative and unlikely to kickstart the economy, much less instil confidence in the productive sections of the economy, those who create wealth, that they will be facilitated instead of being treated as criminals and penalised for being successful. Nor is there any confidence that they won’t be harassed by every two-bit babu, or be obstructed at every stage by an extortionist bureaucracy demanding their rents in exchange for letting people do their business.

The biggest problem for the government now is a credibility issue. This is partly a function of the fact that governments find it difficult to speak the truth because admitting failure makes for bad politics. This then catches the government in a trap. The very nature of an official’s job demands that she defends every action of the government and talks up the economy. This is the reason why officials continue to deny that the economy is heading towards a crisis and quarter after every weak quarter, officials keep insisting that the slowdown has bottomed out and the revival of the economy is around the corner. The trouble is that the loss of credibility — the same guys first go blue in the face denying that the economy was sliding, then claim that the economy will rebound in the next quarter, which never seems to come — ensures that their attempts to talk up the economy fall flat because no one takes what they say seriously.

The simple truth is that the government just doesn’t get the fact that its whack-a-mole approach to tackling the economy’s problems isn’t going to work. Nor will doubling down on policies that have proven to be failures — reviving Air India for example — lead to any kind of improvement. 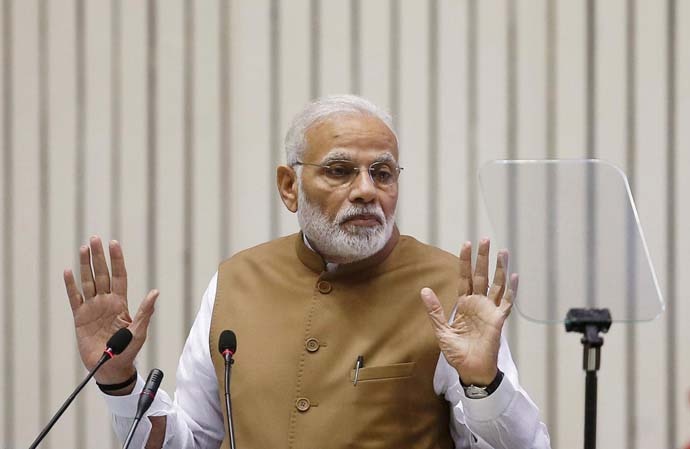 PM Modi has a pretty good understanding of what needs to be done to take the economy to new heights. (Photo: Reuters)

What India needs is sensible but sweeping reform; what India is getting is Soviet-style targets for the bureaucracy. Complicated and convoluted procedures designed by the unimaginative bureaucracy only fuel corruption and act as a disincentive for businesses from becoming part of the system. Worse, they spawn extortion and tax terrorism.

GST is a prime example. The most path-breaking reform of the Modi government has become a millstone around the neck of businesses because of the complexities in complying with the procedures, paperwork and some utterly bizarre provisions of the GST regime.

The really surprising part is that PM Modi has a pretty good understanding of what needs to be done. Take out all his speeches from the 2014 Lok Sabha election campaign and it is clear he had the right ideas on how to take the economy to new heights. And yet, when it comes to implementation, many of his flagship projects have simply not taken off.

For instance, the ‘Make in India’ programme has nothing to show for it and only a masochist would want to ‘Make in India’ given the sort of obstacles and headaches manufacturing involves — it is so much easier to import from China and make a handsome profit than undergo the torture of making in India. The government has of course done reasonably well in its social welfare projects. It has managed to touch the lives of hundreds of millions of people who until now had only received lip service from the politicians and the Indian state. But the thing is that the government cannot sustain these welfare projects if its coffers are empty; but the coffers won’t fill up until businesses make money, which will not happen if profits are treated as evil and wealth is considered a sin, and businessmen are seen as criminals. Unfortunately, the BJP government seems to have imbibed and internalised the Communists’ contempt for sensible economics.