Why the space for dialogue in India is shrinking fast

In public discourse the middle ground is shrinking very fast, in part because no one has any use for it.

Regardless of the spin, or the sugar-coating, on the protests against Citizen Amendment Act (CAA) and the National Register of Citizens (NRC) across India, the fact of the matter remains that these are an expression of Muslim consolidation and pushback at one level, and indicative of the rising communal polarisation in India at another level.

Cut through the claptrap about how the agitators are fighting for the ‘idea of India’, for the ideal of secularism, to protect the Constitution, and every other high sounding, moralistic, kitschy phrase being bandied about, and it is clear that the protests are in predominantly Muslim localities.

The protests are predominantly organised by Muslim organisations, parties, institutions and individuals, and the mobilisation of masses is predominantly along communal lines. Sure, there is smattering of vocal and visible non-Muslims also present.

However, while many of them may actually believe in what they think they are standing up for — an esoteric idea of India — their token presence is useful for the organisers of these protests only to the extent that it helps to keep alive the fiction that the entire ‘movement’ is driven by a yearning to uphold the ‘secular values’ of India. In other words, they are ‘useful idiots’ who give the entire agitation the veneer of being a nationalist mobilisation in defence of the Constitution and the country.

The nucleus of the ‘movement’ is unabashedly Islamist. The Islamist imagery, the communal sloganeering, the graffiti and posters proclaiming the faith, the blood-curling threats and the calls by community leaders to boycott those Hindus who are considered close to the ruling dispensation are dead giveaways of the sentiment driving the protests and agitation. Likewise, the sight of women threatening to teach the Hindus a lesson once they get power and, of course, the exhortations for mass mobilisation to cut off the Northeast from the rest of India, and demonstrating the power of the community to bring cities to a grinding halt through demonstrations and protests. 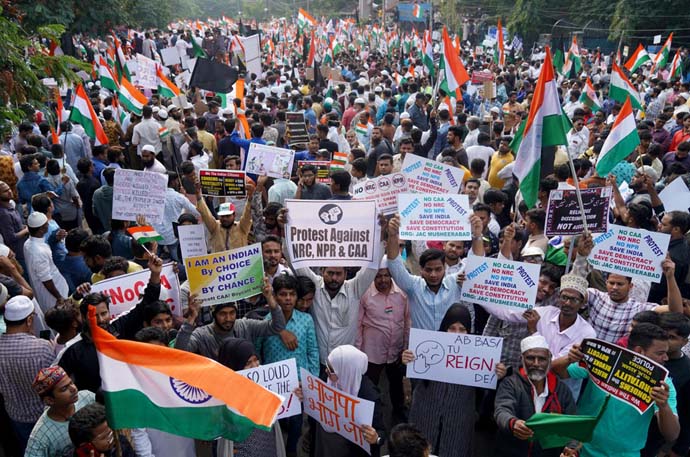 Majority of the people getting worked up about the CAA have little or no idea that it doesn’t affect them or any other Indian citizen at all. (Photo: Reuters)

Airbrushing the politically inconvenient sloganeering and ideologies of the ringmasters of the circus — the Sharjeels — and the disingenuous justifications for their slogans by the secularati, doesn’t alter the reality. The scenes being witnessed today on the streets of many cities in India are not the outcome of just CAA, or for that matter NRC, which is being linked with CAA even though such a conflation is quite specious. In fact, majority of the people getting worked up about the CAA have little or no idea that it doesn’t affect them or any other Indian citizen at all.

CAA-NRC might have acted as a trigger, but the tumult has been many years in the making, long before Narendra Modi appeared on the political scene. The tell-tale signs were always there. No one was reading them, or they did not want to read the signs. Even now, when it is all out in the open, every effort is being made to turn a blind eye to the reality that a psychosis, which was once on the fringe of Muslim politics in India has now become central.

Communal relations in India have always been fraught. Despite all efforts to airbrush things, the reality is that there is an uncomfortable coexistence that has characterised how communities relate to each other. Of course, there are any number of examples of shared cultural values and social mores, of tolerance for and accommodation towards the other community, of friendships and relationships between individuals from different communities, of dependence and reliance, of understanding and adjustment. But by and large these are exceptions which are blown up to present an alternate reality, a utopia that doesn’t exist.

Part of the problem is that we have never really confronted the demons of the past; we would rather brush uncomfortable facts of history under the carpet, distort it, excise and/or redact stuff that causes discomfiture. The things we try to avoid, keep coming back to bite us. It would be easy, and lazy, to pin the blame for this on one side or another, but in reality there is no one who comes out of this smelling of roses.

Worse, the sort of primeval passions that have been unleashed by toxic TV debates and the diatribes carried out from the pulpits offered by social media are only fuelling the fire instead of dousing the flames. Here again, no side is blameless — the hysterics and hyperventilation of one side is matched by the rank hypocrisy, equivocation, double-standards and whataboutery of the other side.

In public discourse the middle ground is shrinking very fast, in part because no one has any use for it. The George W Bush dictum of “you’re either with us or against us” is the new normal. Nuance is lost, restraints are gone, and it is all very much in-your-face. Like it or not, the genie has been let out and it will not go back into the bottle easily. Dangerous ideas have been planted in the minds of people and their green shoots are now visible. Things are building up towards a clash of competing narratives, a prospect that is making the enemies of India lick their chops with delight.