Is Israel trying to woo Pakistan to gain credibility in the Islamic world?

In the process of establishing friendly ties with Pakistan to gain credibility in the Islamic world, is Israel adding to Pakistan's woes?

Amidst Pakistan’s ongoing multiple domestic problems — acquittal of Asia Bibi and ensuing riots, economic turmoil, and killing of an octogenarian religious cleric thought to be close to Prime Minister Imran Khan — a new headache has added to its list of grappling challenges. And, this is different from the run of the mill. It’s a recent incident when an Israeli business jet with sophisticated state-of-the-art gadgetry is believed to have touched Pakistan — albeit for few hours — leaving a trailing blaze of rumours, speculations and interpretations as to how did Pakistan tolerate a Jewish State and anti-Palestinian aircraft and man, breaching Pakistani airspace.

The jet arrival has also let many theories afloat in the media and amongst a highly charged and sensitive polity raising suspicions which are bereft of much reasoning. One of the stories going around is that Israel is definitely trying to court Pakistan — not only for maintaining a geopolitical balance, but also to elicit support from a diehard Muslim nation in light of changing equations between Israel and Saudi Arabia, the UAE, Oman, and Bahrain — apparently to isolate Iran.

Israel, of late, has been gaining credibility in these Muslim states. Interestingly, Israeli cultural minister while in Abu Dhabi recently was accorded extraordinary reception. It reached a crescendo when Israeli national anthem was played in full display when the Israeli judo team won the first prize. This is seen as unprecedented and unique. It is also for the first time that Israeli national anthem was played in the UAE.

Israel has started leaving its footprints in some Muslim states particularly in the Gulf, and this emerging bonhomie does not merit to be overlooked. And Pakistan — religiously least intolerant of all these countries — may be flirted for several reasons.

Meanwhile, it is also perceived in some strategic quarters that the mysterious Jet flier in Pakistan recently may have been part of the USD 6 billion bailouts to Pakistan by Saudi Arabia to rescue the country from its economic imbroglio. In the same vein, Israel is believed to trying to sell its military hardware to Pakistan — which is well known to stockpile latest armaments arguably to fortify itself against India. This argument also gains currency from the fact that a powerful Jewish lobby is active in the US, and it is not unlikely that it would not try to facilitate marketing the supply of Israeli arms to Pakistan. 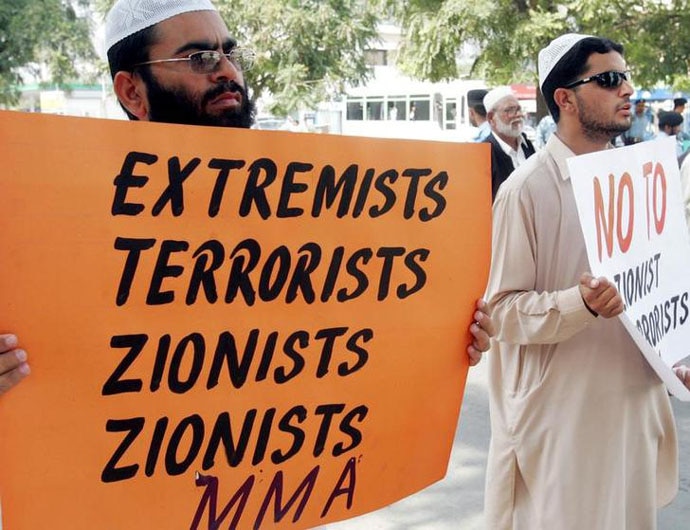 However, Pakistan authorities have rubbished claims of any knowledge of any Israeli visitor paying a visit to Pakistan in recent times by flying a jet aircraft. Assuming this version is correct, a tweet in the social media baffles all. Avi Scharf — the editor of the prominent Israeli liberal daily Haaretz — tweeted, “Israeli biz jet from Tel Aviv to Islamabad on the ground for ten hours and back to Tel Aviv can’t escape notice.”

To keep things in perspective, it is pertinent to point out that former Pakistani President and military dictator — Pervez Musharraf had advocated for a relationship with Israel way back in 2005 when he was at his prime. He always maintained that it would help normalise ties between the two countries. In 2007, Musharraf had even volunteered to mediate the Arab-Israel conflict trying to project a pacifist image. Much to the annoyance and discomfort of the Pakistanis in general, Musharraf articulated similar thoughts in an interview with Al Arabia newspaper, thereby sparking protests. Two years prior to this in 2005, Gen Musharraf addressed the American Jewish Congress in New York to create a favourable public opinion with regard to Israel. We, therefore, see a pattern in attempts to come close to Israel and vice-versa.

Other factors appearing on the sidelines of the jet coming to Pakistan is the Jewish lobby exploiting Imran’s ex-wife Jemima Goldsmith (a Jew herself) to bolster trade ties. A Hindu-Zionist conspiracy theory is also being talked about.

Mohsin Saleem Ullah, a student in the Islamic University at Islamabad wrote an OpEd in Pakistan’s Daily Times on whether trade between Pakistan and Israel was possible in the light of praiseworthy eco-political syncretism developed between Israel and India. Importantly, he opined that New Delhi’s tech relationship with Tel Aviv has not gone unobserved, and one country that may imitate the relationship in the future is Pakistan. Here, we are! 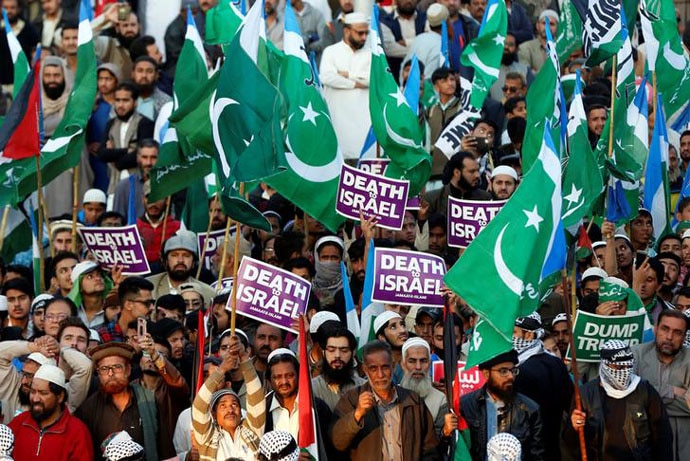 Supporters of religious and political party Jamaat-e-Islami (JI) hold flags and signs as they attend a rally against U.S. President Donald Trump's decision to recognize Jerusalem as the capital of Israel, in Karachi, Pakistan (Credit: Reuters)

Pakistani media too is trying to perhaps influence the public opinion within the country — to go the India way to warm up to Israel for the strengthening of bilateral ties. Another opinion piece appeared in the same paper — written by Muhammad Taher Iqbal — suggesting appropriation of several open channels of communications readily available among the Jewish lobby in the US to reach out to Israel to possibly reduce the hostile content around Pakistan.

With Israel befriending Saudi Arabia (Israel has not yet condemned the Khashoggi murder by Riyadh so as not to rub it on the wrong side) and UAE towards its side, and to wean them away from Iran — obviously to isolate the country.

Prime Minister Imran Khan was in Riyadh recently, and any overtures to Israel for lending a friendly hand may be on cards. New equations are emerging today with Iran’s alienation. Israel perhaps needs Pakistan in this subtle craft of diplomacy. Nothing is predictable in today’s world. The enemy today, is a friend tomorrow. Let the Jet triggered conjectures and speculations take a back seat for some time giving us some time to ponder and analyse further.

Also read: Beijing becomes 'begging' on Pakistan channel: Why we always laugh at others' mistakes