Jammu and Kashmir’s veneer of ‘normalcy’

No one in the government is convinced that the majority of the people in J&K have reconciled to the constitutional changes in the erstwhile state.

Speaking in the Rajya Sabha, Union Home Minister Amit Shah claimed that 100 days after the revocation of Article 370 in Jammu and Kashmir, normalcy has returned to the Valley.

He buttressed his claim with statistics. Shah said there was no curfew in any police station, all landline and postpaid mobile connections were functional, restrictions on assembly were limited to only some areas in the evening, all educational institutions were open and traffic was plying on the roads.

Shops and other establishments were doing business, medical facilities were functional and there was no shortage of food, fuel or medicines, government offices were open and newspapers were being published like before, he added. But the single most important metric used by Shah to emphasise the return of normalcy was that not only were incidents of stone-pelting down sharply, there was also not a single person killed in police firing since August 5. There seems to be a sort of desperation on the part of the government to give an impression that ‘all is well’. (Photo: Reuters)

So, is everything actually back to what it was before August 5?

Not really. Everything Shah said in the Rajya Sabha is correct and factual, but the reality is a little more complicated.

Besides the fact that Kashmir hasn’t quite been ‘normal’ for at least the last 30 years, what currently goes for normalcy on the surface hides the sense of disquiet, uncertainty, even fear (some real, and a lot of it imaginary) and, to an extent, sullenness, disaffection and alienation that pervades the mind space in J&K. Therefore, while schools are open, attendance is very low; markets are open but there is fear of being targeted by terrorists. Mobile connections have been restored, albeit partially, but the Internet shutdown had disrupted the lives of businessmen, students and even ordinary folk because routine things like renewing subscriptions, paying fees, booking tickets, etc, have become impossible. Government offices are open, but there is a sort of stasis in governance. People complain that days after the first snowfall, electricity hasn’t been restored in many parts of the Valley and snow wasn’t cleared even from roads in Srinagar.

The administrative glitches and dysfunction aside, the metric of no casualty in police firing is troubling. While at one level, it is helpful in debunking some of the lurid and ludicrous propaganda being carried out against India, especially by Pakistan and liberals around the world, at another level, the same metric can become a sort of trap that the authorities are laying for themselves. There seems to be a sort of desperation on the part of the government to give an impression that ‘all is well’. This, in turn, is fuelling fear among law enforcement agencies and officials that they must go out of their way to avoid any casualties even when faced with violent demonstrations.

Not only does this pressure tie the hands of the law enforcement agencies, it also emboldens the violent mobs — they can threaten the life and limb of security force personnel and destroy public and private property without any fear of consequences. Even in the past, constraints imposed on security forces by political exigencies led to Faustian bargains in which terrorists and their supporters were left unmolested in exchange for desisting from attacks and killings in certain areas. However, this only strengthened the separatists/terrorists at the expense of the Indian state.

Already, there are reports of a number of improvised explosive devices (IEDs) being discovered and defused. The return of the IEDs along with reports of scores of foreign terrorists having infiltrated the state and imparting training to local recruits should send alarm bells ringing in the security establishment. For Delhi to pretend that everything is normal in Kashmir is to live in denial. 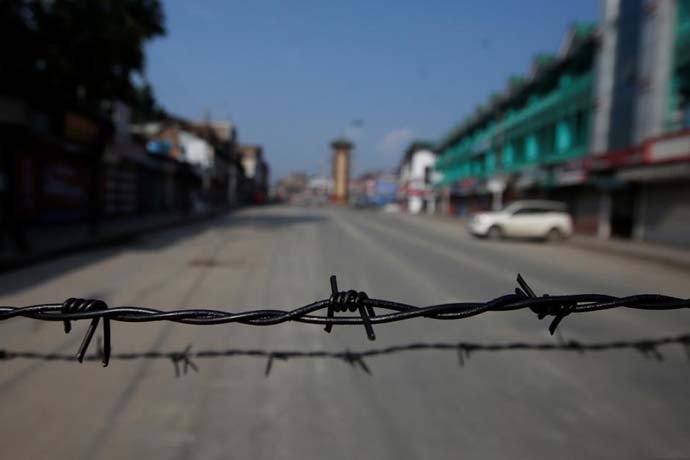 While schools are open, attendance is very low; markets are open but there is fear of being targeted by terrorists. (Photo: Reuters)

The absence of violence, especially the absence of the use of violence by the state to quell civil disturbances, is not the best measure of normalcy in a place like Kashmir. Often, this is an intimation that something big might be brewing behind the scenes. In any case, with the winter having set in, the next few months will be used by terrorists to regroup and regain strength, renew their networks and prepare for the next spring/summer. So, the current quiet could be the lull before the storm.

Truth be told, no one in the government is convinced that a substantial majority of the people in the restive Valley have reconciled to the constitutional changes in the erstwhile state. The clampdown on any kind of political activity has not only prevented but also led to what Prof Amitabh Mattoo calls the ‘bureaucratisation of politics’ in the Union Territory.

Instead of a lieutenant-governor who was a well-known politician with administrative skills, the government has appointed a faceless bureaucrat who might be an able administrator but has no real political instinct or skills to start restoring the political process in the Valley. Worse, the political vacuum has meant that people are at a loose end because of the insularity (not to mention rapacity) of the local bureaucracy. This is neither normal nor sustainable. The problem is that the constant parroting of ‘normalcy’ means that those in power don’t feel the need to do what needs to be done to actually restore a modicum of normalcy. After all, if everything is normal, where is the need to fix anything?