Jhadoo 101 for 'bade log': How to successfully wield a broom for photos

BJP lawmaker from Mathura Hema Malini and Minister of State Anurag Thakur seem to be clueless about the humble jhadoo and are in dire need to learn the technique.

Basanti was supposed to arrive on a horse; she surprised all present by riding in on a broom instead.

Jokes apart, I’m glad that the broom is back in the limelight. Despite the good intentions, it’s a fact that brooming doesn’t come naturally to Hema Malini or Anurag Thakur.

With all due respect, Hemaji looked like she was playing inverted lacrosse and Anuragji seemed to be patting down footmarks on a dustbowl of a pitch with his bat.

In India, ‘bade log’ are not meant to go near the jhadoo, which is why ‘bade log’ wielding a broom comes loaded with symbolism. This piece is an attempt to fill the gaps in knowledge the elite might have regarding this quintessential Indian tool used for sweeping things under the rug. Arvind Kejriwal is justifiably up in arms at what he sees as a clear instance of spirited plagiarism. The BJP has appropriated Aam Aadmi Party's (AAP) symbol without so much as a by your leave. It’s not that AAP has an exclusive claim over the jhadoo either, it has been deployed often by the women’s wing of political parties, especially when protesting price rise.

During these morchas against runaway inflation, the broom is held aloft like a sword, while steel utensils are beaten with steel spoons (karchis), lending a martial air to the proceedings.

The brand new phool jhadoo, before being put to active daily use, needs to be shaken patiently for about half an hour. You will observe it gives off a sprinkling of fine brown dust. The more one shakes the broom, the more dust falls from it, making one wonder if the broom is endowed with some kind of PC Sorcar’s eternal Water of India powers. The lesson to learn here is: With a new phool jhadoo, always shake well before use.

On the other hand, seekh-ki-jhadoo can be launched into action right away. Just plug and play. This jhadoo, unlike its phool counterpart, is all-weather. It comes in use in the rainy season, or in the bathroom, when you are sitting on your toilet throne reading Calvin and Hobbes, and suddenly spot the redoubtable cockroach marching in your direction with intent.

One grabs the seekh-ki-jhadoo and brings it down with a great vengeance on the potential holocaust survivor only to find that the unscathed cockroach has appeared miraculously next to the mirror.

Now the phool-ki-jhadoo shares an intimate bond with the dustpan, which for some reason in our house is called a ‘soup’, like in ‘soup up the mess’. The phool jhadoo plays the role of the chauvinist Indian male, huffing and puffing and making a show of it, but it’s the dustpan, the dutiful wife, that is doing the actual work of collecting and depositing the dirt.

It must be pointed out that jhadoos are not for forever.

Like us humans, jhadoos too fall apart. The handle is the weak spot. When this happens you need to gather the jhadoo shoots and tie them together with a suthli (brown jute thread). That is if you have managed to save the ball of suthli from your cat in the first place.

The jhadoo is versatile. A jhadoo, phool or seekh, can be tied to a baans (bamboo pole) and voila you are holding in your hands a convenient weapon to fight cobwebs in the highest corners of your spider-embroidered ceiling.

The jhadoo is also known to have anti-depressant properties. On a morning that you are feeling low, try holding a jhadoo. Stand in the middle of your room, shut your eyes and fall in rhythm with your breathing. Wrap your right palm firmly around the jhadoo handle and gently crisscross the invisible air in front of your nose with the blade of the jhadoo. From deep within, you will experience a sense of purposefulness and infinite possibility. Kehte hain na, ki jhadoo hai to mumkin hai. 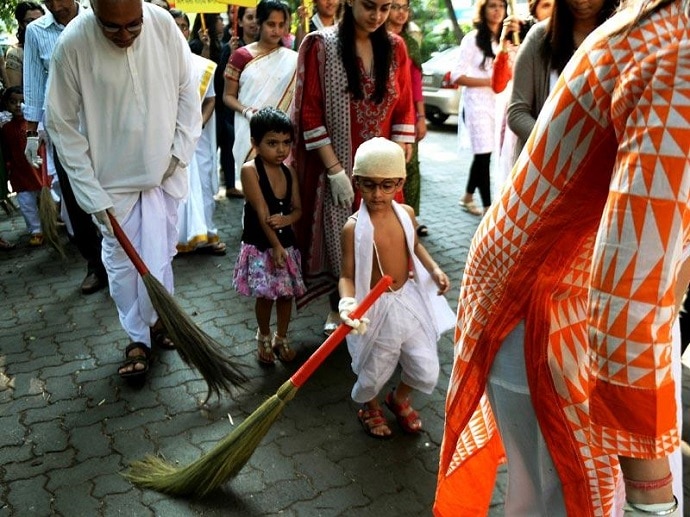 The jhadoo stands for swadeshi resistance to western culture. All the hoovers of America couldn’t make a dent in the Indian market. The vacuum cleaner remains an elite concept confined to office spaces. It’s the jhadoo that prevailed and continues to hold the masses in its sway.

In Hindi comics, the jhadoo is depicted as an instrument of chastisement (along with the belan or the rolling pin) used by Indian wives to lightly beat their husbands and bring them to heel in the great slapstick tradition.

The jhadoo has also been immortalized in Bollywood lyrics such as ‘jhadoo teri nazar’ and its healing properties bottled into legendary pain-relieving ointments — jhadoo balm. When bad luck strikes, we resort to black magic, that is, jhadoo-tona and we greet strangers with a welcoming jhadoo ki jappi.

My only complaint against the jhadoo is regarding its effectiveness. I live in Dehradun; the garbage dump near my house has become a landmark of sorts. It’s survived many changes of government. This year, the morning I went to vote, it had magnified into an extravagant sprawl. The sweeping powers granted to the jhadoo, it seems, have also been rendered redundant.

Anyhow — it’s my GP’s favourite word — anyhow, my faith in the jhadoo is unshaken. I will be starting a plant-a-jhadoo campaign along the Yamuna Expressway next week. The jhadoo is known to absorb carbon dioxide and emit cylinders of pure oxygen.

If you cannot join me in this onerous task, you can plant a jhadoo in your backyard. Jai Hind!

Post your comment
#Parliament, #Hema malini trolled, #Swachh bharat mission, #Anurag Thakur
The views and opinions expressed in this article are those of the authors and do not necessarily reflect the official policy or position of DailyO.in or the India Today Group. The writers are solely responsible for any claims arising out of the contents of this article.