Coming ahead of the Uttar Pradesh elections, for which Priyanka Vadra Gandhi is being positioned as a challenger to Yogi Adityanath, Jitin Prasada’s defection is an early sign of revolt by the local leadership.

Jitin Prasada has not received as much media attention throughout his career as he did in the past few days. He does not have a significant political heft to deserve such over-the-top coverage other than his impressive pedigree and closeness to the Gandhi family. If Rajiv Gandhi had his Doon School Old Boys’ Club, Prasada was part of Rahul Gandhi’s “Babalog” cohort. I remember him being in the news last – when after attending one of his family celebrations in Lucknow during the first phase of the pandemic – some guests were tested positive for Covid and had to go into self-isolation. One of them, a scion of a Royal family and MP from Rajasthan, had met the President of India for a photo-op just before that causing concern about contact transmission in Rashtrapati Bhavan.

Although he has been a Minister in the UPA cabinet, Prasada is no Jyotiraditya Scindia or Rajesh Pilot. His electoral track record is replete with a series of defeats, and he is not known to have a sizable following. He floated the Brahmin Chetana Parishad last year, but it did not quite set the Gomti on fire by its potential for mobilising the Upper Caste voters of Uttar Pradesh. Then why so much excitement over his crossing over to the BJP? Much of this has already been analysed to death in the last 24 hours. But some aspects merit revisiting even at the cost of repetition. 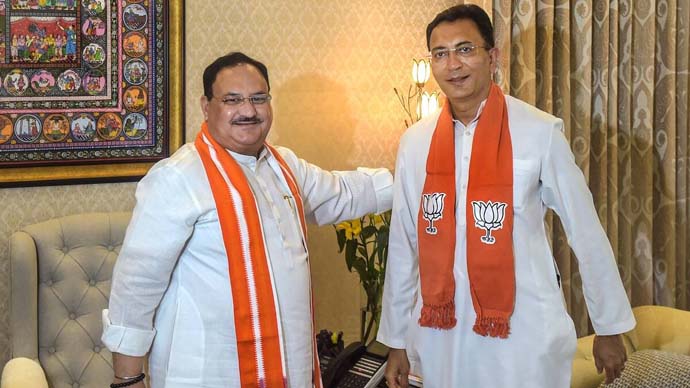 The departure of Jitin Prasada confirms the disenchantment among the young Turks. (Photo: PTI)

First, BJP supporters and closet critics of the Gandhi family can take vicarious pleasure from what is perceived as a jolt to the “palace”. Coming ahead of the Uttar Pradesh elections, for which Priyanka Vadra Gandhi is being positioned as a challenger to Yogi Adityanath, Prasada’s defection is an early sign of revolt by the local leadership. In its fight against the BJP, the Congress would have to count a lot on the support of the Brahmin constituency, which is apparently disenchanted with the Yogi Adityanath rule and Prasada’s exit could dent that prospect. However, with elections being eight months away, it is too early to make any such call.

The second hypothesis is built upon rumours about a strained relationship between Yogi Adityanath and the BJP High Command in Delhi, more specifically Narendra Modi and Amit Shah. Prasada’s appeal amongst the upper caste might temper Yogi’s ambition. But such an assumption would be both simplistic and exaggerated.

Third, with Jitin Prasada jumping ships, both the opposition and media are reading the tea leaves for more such exits from the Congress in the coming days. Much meaning is being attached to a solitary tweet from Milind Deora praising the Gujarat Chief Minister of BJP. Sachin Pilot’s frustrations at being denied what he considers to be his rightful claim in Rajasthan is a subject of daily news. Hence, many believe, this could open the proverbial floodgates of Congress, triggering an exodus that was in the cards for a long time.

While the rest of the world is abuzz with speculations and conspiracy theories Rahul Gandhi appears to be unperturbed. Whatever the criticisms against the Congress scion, one cannot but admire his nonchalance. However, there is something baffling about Gandhi’s style of operation. It is often said that Narendra Modi listens only to his own counsel and does not have any advisors other than, perhaps, Amit Shah now and Arun Jaitley earlier. Rahul Gandhi himself makes this accusation frequently about the Prime Minister. However, one is equally intrigued about who Gandhi's advisors really are.

Since the famous letter of the G23 was released to the public, it is no secret that there is little love lost between Rahul Gandhi and the old guard. That Sachin Pilot is seething is for everyone to see. The departure of Jitin Prasada confirms the disenchantment among the young Turks. For a long time, there was the reliable man-of-all-seasons — Ahmed Patel — to chaperone the family. But, after his demise, are there any palace loyalists of substance left to chart out a strategy?

The names and faces that come to mind do not inspire much confidence. Most of them have neither political experience nor demonstrable leadership competencies. There may be some activists and academics. Young professionals in his secretariat, who seem to be more preoccupied with social media. Perhaps, a few retired bureaucrats and family friends like Sam Pitroda, Suman Dubey and Wajahat Habibullah.

Among the remaining politicians, one can count P Chidambaram, Jairam Ramesh, Shashi Tharoor, AK Antony, KC Venugopal, Digvijaya Singh, Kamal Nath and Ashok Gehlot. Now one can add Bhupesh Baghel and DK Sivakumar to the list. But, whether they are part of the inner circle, and to what extent they have Rahul Gandhi’s ears is a matter of conjecture. Thus, by all accounts, Mr Gandhi operates out of an island, unless as some suspect he has outsourced strategy to some external agency. There lies the significance of Jitin Prasada’s revolt, as it were.

Now coming to BJP, the implications of Jitin Prasada’s entry are equally interesting. To think that this move is going to rattle Yogi Adityanath would be naive.  At the same time when BJP was coping with a perception crisis in Uttar Pradesh, with the opposition, in particular, Rahul Gandhi and the Congress, taking continuous pot-shots at it, a high profile member of the Rahul Gandhi camp deserting him is a minor PsyOps gain. More important, is the flutter it has caused raising possibilities of further departures from the grand old party at a national level. This would make Modi’s detractors take a pause from making dire predictions for the 2022 Assembly Elections in UP and the Lok Sabha in 2024.

However, there is a more significant subtext to this new acquisition strategy of the BJP. Viewed along with the appointment of Himanta Biswa Sarma as Assam Chief Minister and Suvendu Adhikari as LOP in West Bengal, entry of Baijayant Panda, Jyotiraditya Scindia, Jitin Prasada and, possibly, Sachin Pilot in the queue shows BJP is now more open to accommodating entrants from outside the RSS fold into the organisations. These ambitious youngsters would not be satisfied to be benched like some of the “past sell-by date” politicians who have crossed over to the BJP in recent times. Although Panda and Scindia are yet to be given any important berth — they cannot be kept waiting indefinitely.

Further, the profile of these lateral entrants is quite distinct from BJP’s own home-grown gen-next. All of them are well-educated, suave and articulate. Does it mean that, by inducting these more urbane crops, BJP is trying to woo the upper-crust who has been discernibly alienated by its overt Hindutva politics? For that, the party will have to place them in positions of consequence and allow enough room to make a difference. But, would that not invite an international backlash especially from the second and third-generation leaders who have been waiting in the wings for their time under the sun.

These are tricky questions that Narendra Modi and Amit Shah will have to solve taking the Sangh into confidence. But, it shows BJP is not a party to sit idle after a setback. They are always planning two steps ahead. Only Rahul Gandhi can afford the luxury of contemplating in tranquillity as the Titanic sinks further. Anyone else in his place would have raised the SOS flag.