Though there were occasional scuffles between student groups, the campus was largely known for debates and discussions to resolve any issues. Violence was never seen as a solution.

What happened in Jawaharlal Nehru University (JNU) on Sunday evening was beyond shocking and condemnable. It spelt the end of JNU’s unbroken record of heated, but peaceful, dissent. Never in my 20 years as JNU Professor had I felt unsafe.

A history of dialogue

Even when I was surrounded by heckling crowds — as on that fateful day in February 2016 when I stood up against the then JNU Students’ Union President (JNUSU), Kanhaiya Kumar — I was booed, heckled, shown adverse placards, surrounded, even jostled a bit. But I never felt I would be manhandled, let alone beaten up.

Later, when the School of Languages, where I teach, was locked down, I had to practically force my way in. I did that by sitting down with the protesters, pushing aside their feet, and going in.

The act of touching the feet of the students, even though to dislodge them, made them give way. Their residual respect for me was rekindled. The cynics later put a different spin saying I was compelled and intimidated to touch their feet. But nothing of that sort happened. Though I disagreed with the jeering and somewhat aggressive crowd, I never felt afraid that I would come to physical harm. 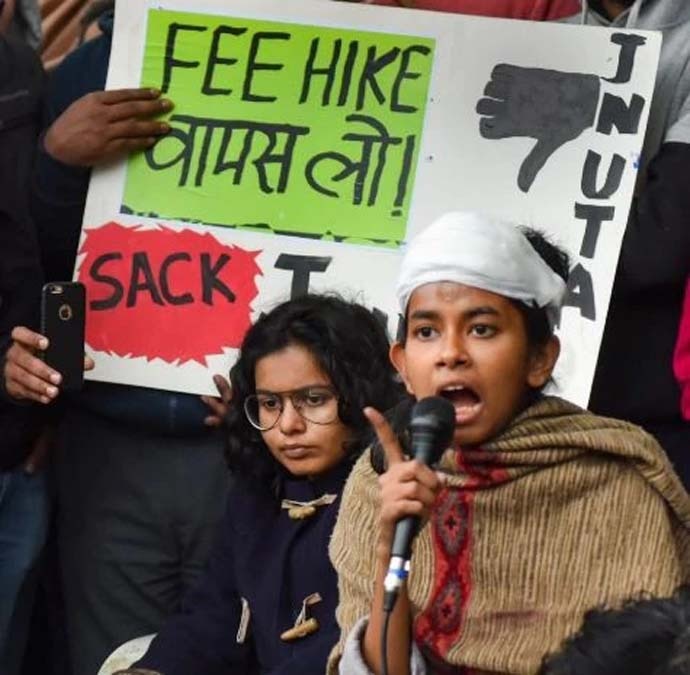 JNU is an exceptional space when it comes to Indian universities. Women are safe at all times of the day or night. Politics prevails, even to the extent that it disrupts studies. Many times I have written against the over-politicisation of the campus. Yet, no political group threatens teachers, barges into classes, or settles arguments through fisticuffs.

True, an occasional scuffle between opposing student groups does break out, but by and large, our campus is safe — even in the worst of times, as in Indira Gandhi’s Emergency, when over a 100 students were jailed, including our current Nobel laureate for Economics, Abhijit Banerjee.

This unbroken record was shattered on January 5, 2020. Gangs of armed thugs and hoodlums roamed the campus attacking students and teachers. They vandalised buildings, broke into students’ rooms, and destroyed property and possessions.

Bleeding students had to be rushed to AIIMS. There was blood on the JNU streets. For the first time. All this is shameful, deplorable, and utterly regrettable. Regardless of who did it.

Well, who did do it? With claims and counter-claims flying thick and fast, it is almost impossible to tell. While two FIRs have been registered against JNUSU President Aishe Ghosh, it was she who was shown bleeding in most videos and photos. For every video accusing the Akhil Bharatiya Vidyarthi Parishad (ABVP), there are others incriminating their Leftist opponents.

Will there be a free and fair inquiry? Will the guilty be brought to book? I hope so, not only as a senior JNU faculty member but as a tax-paying citizen of the country. Regardless of their political affiliations, I believe the guilty must be punished. But, to be perfectly honest, I am not sure this will happen. I am not sure we will know who perpetrated the heinous attack on my university.

Amid the escalating media and ideological war, truth is often the first casualty. In earlier such incidents as at Ramjas College, University of Delhi, Banaras Hindu University (BHU), University of Hyderabad, Jamia Millia Islamia, Aligarh Muslim University, and elsewhere, we never found out the truth. We never found out, for that matter, who the masked slogan shouters in JNU were in February 2016.

“Bharat tere tukde honge, Inshallah, Inshallah”— it was that cry that started a process that has still not found its resolution or closure.

I do not believe that the JNU imbroglio is merely a “law and order” problem. It is a pitched political and ideological battle. The fee hike is only an excuse. Even the ABVP opposed it. It was thoroughly justified, but the administration had little to gain monetarily or morally by imposing it at that time. A negotiated settlement might perhaps have de-escalated matters. That chance was lost and the situation spiralled out of control.

Academic standards need to be maintained as well as the regular schedule of examinations and classes. For this, an atmosphere of impartiality, not partisanship, is needed. Rule-breakers need to be held accountable regardless of their political beliefs.

Appointments to all positions need to be based on merit and worthiness. The administration must no longer be perceived as anti-students or anti-teachers. Vice-chancellor, M Jagadesh Kumar, has appealed to the JNU community to “put the past behind and make a new beginning.” He has voiced what all of us feel: “Our heart goes out to all the injured students… Our campus is known for debates and discussions to resolve any issues. Violence is not a solution.” I welcome and support his statement.

I hope the warring parties come to terms soon. I hope normalcy is indeed restored at the earliest. I want, more than anything, for students and teachers to get back to their classes and research. I want the academics to be the top priority in JNU again.

#Tukde tukde gang, #Jnuprotests, #ABVP, #JNUSU
The views and opinions expressed in this article are those of the authors and do not necessarily reflect the official policy or position of DailyO.in or the India Today Group. The writers are solely responsible for any claims arising out of the contents of this article.