Job markets in India: New sectors have opened up, yet job loss remains a major concern

New series of QES, inexplicably discontinued post-October 2017, showed structural changes in the economy. Education and health sectors had emerged as the new flag bearers of jobs in place of construction and IT/BPO.

"In the run-up to the 2014 General Elections, the BJP promised one crore jobs to youth, lamenting in its manifesto that the 10 years of the Congress-led government had “pushed the country 20 years behind and rendered millions of men and women jobless”. Its manifesto also talked about promoting sectors like manufacturing, tourism and IT, which had the potential to create millions of jobs every year.

Well into electioneering for 2019's General Elections, the BJP-led government has stopped publishing all relevant job statistics — quarterly labour surveys (QES), employment-unemployment surveys (EUS) and the much awaited NSSO’s 2017-18 periodic labour force survey (PLFS) — quite apparently because all these reports paint a grim job scenario in the country.

The QES is of particular relevance here.

It was designed by the Congress-led government in 2008 (old QES series) to track eight labour-intensive non-farm sectors when jobless growth hit the headlines. This was to enable appropriate and timely interventions.

In 2016, the BJP-led government expanded its scope to cover 80% of the organised workforce (new QES series), including manufacturing, tourism and IT — clubbed into eight sectors even though it covered significantly more areas than the eight under the old QES — but stopped it after October 2017.

Here is what the new QES series revealed:

Limited in its duration though, a reading of the seven new QES series reports shows that India had gone through a significant structural transformation. The construction and IT/BPO sectors were no longer the flag bearers of jobs. Nor was tourism (using the ‘accommodation and restaurant’ sector that new QES tracked as a proxy for it) creating millions of jobs as the BJP had anticipated.

Instead, the top three sectors creating jobs were manufacturing (the BJP did identify it as one of the focus areas), health and education. But if looked at in absolute terms, these sectors were not creating too many jobs either.

For example, manufacturing which employed the most — 101.17 lakh constituting 49.3% of the total sectors being tracked — produced only 1.99 lakh jobs in seven quarters. Moreover, in two quarters, it had shed 12,000 and 87,000 jobs, as the table below shows. The education sector emerged as a close second with 1.89 lakh jobs – even though its total employment was only half (50 lakh) that of manufacturing.

The health sector was third with 1.08 lakh new jobs, while it employed only 12 lakh.

Construction and IT/BPO no longer flag bearer of jobs

The new QES series confirmed that the construction and IT/PBO sectors had lost their pre-eminence. In fact, construction saw a net job loss of 35,000. The NSSO’s 2011-12 PLFS report had said construction created considerable jobs between 1997-98 and 2011-12 and absorbed rural migration. That was no more so.

Similar was the case with IT/BPO. Once the toast of the country, it generated only 38,000 new jobs in the seven quarters — while during 2008 and 2015 (as the old QES series showed), it was generating an average of 91,000 jobs every quarter even while witnessing massive job loss during 2013-15.

What, however, raises doubts about the new QES series data is the complete absence of the impact of two big economic shocks — demonetisation, announced in November 2016, and GST, hastily rolled out in July 2017.

The then-chief economic advisor Arvind Subramanian later (November 2018) said, "Demonetisation was a massive, draconian, monetary shock" and that together with GST and other factors slowed down the economy from 8% to 6.8% in seven quarters that followed. 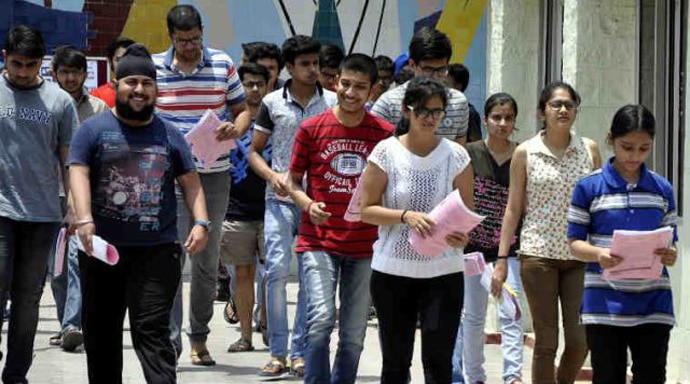 The unemployment rate touched a 45-year high — more than half the working-age people are out of the job market. (Representative image: Reuters)

The perusal of the above table, however, gives a contrary picture.

In the July-October 2016 quarter, before demonetisation and GST hit the economy, four sectors — construction, trade, accommodation and restaurants and education — saw job loss while two others — transport and health — saw zero new jobs.

But post these shocks, all these sectors — except construction — were creating more jobs.

Be as that may be, good statecraft and prudence would have demanded that the government continued tracking job creation in the economy, especially one reeling under joblessness for a decade and more, but this was stopped apparently for fear of bad publicity and thus, the opportunity to study job creations and do something about it was lost.

From a job-less economy to a job-lost economy

The BJP-led government came to power in 2014 promising more jobs but is ending up with massive job loss. The NSSO’s 2017-18 PLFS report — which it refuses to release three months after the National Statistical Commission (NSC) cleared it and a couple of months after its two independent members (including its head) resigned in protest — found its way into two newspapers, providing evidence of its abject failure in job creation.

The release of this NSSO report would help in providing better insight into the structural changes taking place in the job market that the new QES series indicated.

But, as it is clear, we will probably have to wait until the elections are over.