India's democratic institutions are crumbling. And Modi government is to blame for it

First to be on the chopping block was Parliament. Then came the media. With two pillars of democracy having fallen, the judiciary, presumably the most independent of all, was naturally in line to come under pressure. The judiciary, from the lower to the higher, is already overburdened with a huge backlog of cases. Now, its functional independence is being compromised resulting in delay and denial of justice to the common people.

As an institution, the judiciary, along with some sections of the media, provides a ray of hope in these depressing times of compromised and emasculated democratic institutions. Common people still look up to it for justice. But if the government wants to have its unfettered way, an independent judiciary can prove to be the biggest stumbling block. There has to be a way to get through the impediment.

The unprecedented press conference held by the four senior judges of the Supreme Court was symptomatic of not only the existing tension within the court but also between the judiciary and the government.

The government is ostensibly maintaining a stance of non-interference in the independent functioning of the judiciary. The government has also refrained from propounding any theory or slogan such as the need for a "committed" judiciary, which was raised during Indira Gandhi's time.

However, this government uses more subtle and pernicious ways in trying to achieve its objectives. It has perfected the art of undermining democratic institutions quietly.

Think of the first estate. Recall Narendra Modi's entry to Parliament after his historic 2014 victory. He bowed and placed his head on the steps of the House in reverence. He gave an impression as though he had left Gujarat behind to begin a new chapter and that he would respect the established norms and traditions; and that his new innings would be defined by parliamentary consensus, rather than confrontation.

Recall his first speech in the Lok Sabha in reply to the President's address to the joint session of Parliament. It was placatory. He declared that he would be guided by the principles laid down by "three great men" - Mahatma Gandhi, Ram Manohar Lohiya and Deen Dayal Upadhaya. But by omitting Jawaharlal Nehru from the speech, he hinted at the things to come.

Within a few months of the government coming to power, the so-called fringe leaders hijacked the discourse. Sadhvi Niranjan Jyoti's "Haramzadon" versus "Ramzadon" remark during Delhi elections made the BJP's intent clear.

But what's the connection of all these events with undermining of Parliament? There is. Opposition members wanted the prime minister to speak and assure the nation that the government would act against hardline Hindutva elements, who are out to rip apart the social fabric of the country. They demanded that Modi condemn the killings of writers and rein in the "ghar wapsi" zealots.

Modi's initial silence over the lynching of Mohammad Akhlaq, his refusal to condemn the incident and his long silence over the death of Rohith Vemula further convinced the Opposition that he was not keen on building an atmosphere of goodwill.

In the second year, Modi discarded all pretensions and entered the phase of ugly confrontations with the Opposition.

Even more serious undermining of Parliament is illustrated by systematic bypassing of the standing committees. The rot began earlier but during Modi's rule the committee system seems to have been virtually guillotined. 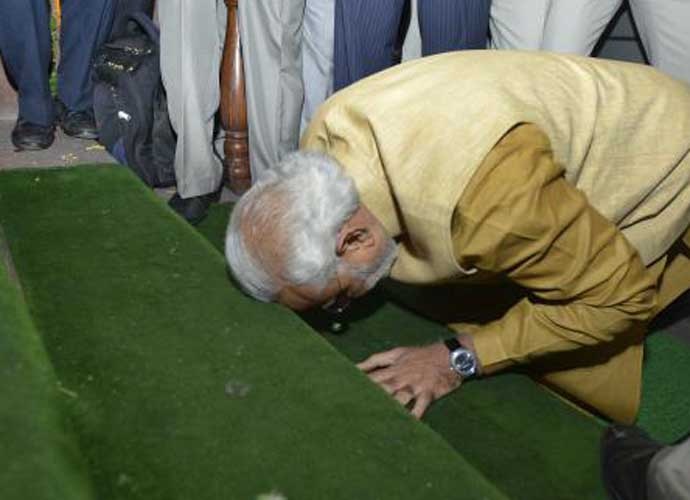 As for the fourth estate, the media is pariah as far as Modi is concerned. He has set a record of not holding a single press conference. Yet, he is assured of virtually complete mainstream media support.

Why is he worried in meeting the press if the media stands behind him? Who will ask Modi a hostile question if Modi were to meet the press? The national media in any case has no reputation for asking uncomfortable questions during prime ministers' press conferences.

There are reasons why he has kept the press at arm's length. One is the contempt for an independent and critical press. The other is his confidence that industry-press ownership nexus in any case ensures a pliant and favourable media.

The government tried to influence the appointment and transfer of judges through the National Judicial Appointment Commission (NJAC) but failed. A five-member constitution bench of the Supreme Court struck down the NJAC by a majority of 4:1 in 2015. Incidentally, justice Jasti Chelameswar happened to be the dissenting judge on the bench.

That all is not well between the judiciary and the government has come out in the open on many occasions. Finance minister Arun Jaitley, himself a prominent lawyer, said in the Rajya Sabha on May 11, 2016: "The manner in which encroachment of legislative and executive authority by India's judiciary is taking place, probably financial power and budget making is the last power that you have left."

He was speaking in response to demand raised by Congress' for a dispute redressal mechanism on GST related issues arising between the Centre and the states.

Claiming that the judiciary has been encroaching on the domain of legislature and executive, he said, "Step by step, brick by brick, the edifice of India's legislature is being destroyed."

On April 6, 2015, Modi also spoke about judiciary in an accusatory tone. Addressing a joint conference of chief ministers and chief justices, he said the courts needed to be cautious against "perception-driven verdicts", which are often driven by five-star activists."

The prime minister also contradicted the CJI who had expressed disappointment over the problem of pending cases due to a lack of appointment of judges. Modi said the courts took years to interpret "poorly drafted laws" that was a major reason for pendency of cases.

The judiciary is the last bastion tasked with keeping democracy alive and in good health. Democracy will fail, as the four judges emphasised, if judiciary fails to stand up to the political executive. That's where a totalitarian state begins.