Shooting Fire in Kargil: When India's determined artillery put the love of Allah in Pakistan's troops

Kargil was also won with the relentless artillery of the Indian army, which rained fire on the Pakistanis night and day, in an offensive last matched by its intensity only in World War 2.

In the first week of July 1999, the Indian tricolour was hoisted on Tiger Hill — and soon fluttered atop many other peaks in the high Himalayas of the Kargil district.

By mid-July 1999, Pakistan’s perfidious intrusions into territory on the Indian side of the Line of Control (LoC) in Jammu and Kashmir (J&K) had been undone.

This Indian Army victory against daunting odds was underpinned by the overwhelming superiority of the firepower unleashed by the guns, mortars and rocket launchers of the regiment of artillery.

Over a period of one and a half months, concentrated artillery firepower had systematically destroyed the Pakistanis’ defences — and, ultimately, as it says in the manuals, the artillery "broke the enemy's will to fight”. It was acknowledged by no less than the Chief of Army Staff himself that artillery had paved the way for victory during the Kargil conflict. On the fifth anniversary of that famous victory, the regiment remembers its martyrs, gallantry award winners, those who were wounded and maimed, and all those who simply did their duty — courageously, tirelessly, uncomplainingly — with gratitude.

Operation Vijay was a joint infantry-artillery endeavour to evict regular Pakistani soldiers of the Northern Light Infantry (NLI) who had intruded across the Line of Control (LoC) into Indian territory and occupied unheld high-altitude mountain peaks and ridgelines. When the initial attempts to beat them back were thwarted, it soon became clear that only massive and sustained firepower could destroy the intruders’ sangars and systematically break their will to fight through a process of attrition. It was realised that only a massive campaign of sustained degradation would enable the gallant infantrymen to close in with and evict the intruders.

Thus began a unique saga in the history of the employment of artillery firepower in battle.

From mid-May to almost mid-June, both time and effort were devoted to building up the guns and ammunition — a major logistics challenge.

The first important ridgeline to fall was Tololing in the Drass sub-sector on June 13, 1999. Tololing was captured after several weeks of bitter fighting. The attacks were preceded by sustained fire assaults from over one hundred artillery guns, mortars and rocket launchers firing in concert. Thousands of shells, bombs and rocket warheads wreaked havoc on the targets and prevented the enemy from interfering with the assault. The 155 mm Bofors medium guns and 105 mm Indian field guns firing in the direct firing role from gun positions on the national highway under the nose of the enemy destroyed all visible sangars and forced the enemy to abandon several positions.

The arcs of fire trailing behind the Bofors high explosive shells and the Grad rockets provided an awesome sight and instilled the fear of Allah into the minds of Pakistan’s soldiers. 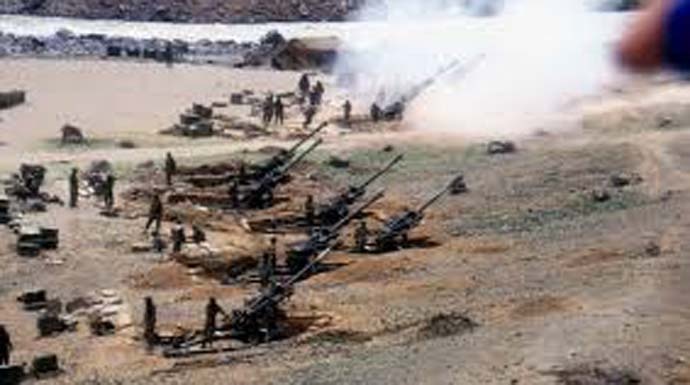 Relentless and single-minded: The recpature of Tiger Hill saw intense fighting in the war of Kargil. (Photo: India Today)

The capture of Tololing and the adjoining features paved the way for successive assaults to be launched on the Tiger Hill complex from several directions. In India’s first televised battle, after a series of multi-directional assaults, preceded by accurate and sustained preparatory bombardment by the artillery, Tiger Hill was re-captured on July 5, 1999 — in some of the most bloody fighting ever in the annals of military history. Artillery FOOs led from the front, fought shoulder-to-shoulder with their infantry company commanders and brought down unbelievably accurate fire on the objectives. At Tiger Hill, the leading platoon closed in within 40 to 50 metres of the shelling before the company commander asked for artillery covering fire to be lifted.

Over 1,200 rounds of high explosive (HE) rained down on Tiger Hill in the space of five minutes and caused large-scale death and devastation. Once again, the Gunners of the Indian artillery fired their guns audaciously in the direct firing role under the very nose of Pakistani artillery observation posts (OPs) — without regard for personal safety. Even 122 mm Grad multi-barreled rocket launchers (MBRLs) were employed in the direct firing role. Hundreds of shells and rocket warheads impacted on the pinnacle of Tiger Hill in full view of TV cameras — and the nation watched in rapt attention as the might of the regiment of artillery burst forth in magnificent glory. 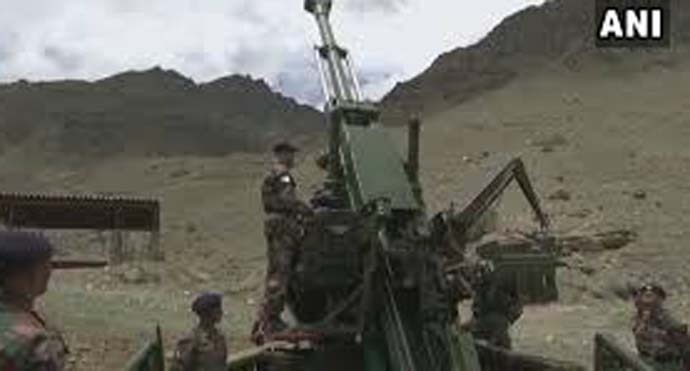 Gun Hill: Point 4875 has been renamed Gun Hill, owing to the amount of artillery used here by the Indian army. (Photo: ANI)

Soon after the fall of Tiger Hill, Point 4875, another dominating feature to the west of Tiger Hill and jutting into the Mashkoh Valley, was re-captured on July 7, 1999. Once again, the thunder of the guns rippled across the mountains and the valleys, the ridgelines and the spurs emanating from them, the nullahs and the deep ravines between them. God must have looked down from the heavens and approved of this celestial orchestra for victory lay at the feet of the infantry when the guns shifted their menacing fire to other hapless targets.

Point 4875 has since been re-named "Gun Hill" in honour of the stupendous performance of the gunners in the Drass and Mashkoh sub-sectors.

While the nation’s attention was riveted on the fighting in the Drass sector, steady progress was being made in the Batalik sector despite heavy casualties. In the Batalik sector, the terrain was much tougher and the enemy was far more strongly entrenched. The containment battle itself took almost a month. Artillery OPs were established on dominating heights and sustained artillery fire was brought down on the enemy continuously day and night, thus allowing him no rest and steadily chipping away at his morale.

Point 5203 was re-captured on June 21, 1999 and Khalubar was re-captured on July 6, 1999. During the next few days, further attacks were pressed home against the remaining Pakistani posts in the Batalik sub-sector and these fell quickly after being pulverised by artillery fire. Once again, artillery firepower had played an important part in softening the defences and destroying the enemy’s battalion headquarters and logistics infrastructure.

Such high rates of fire over long periods had not been witnessed anywhere in the world since the Second World War.

Even during the Second World War, such sustained artillery firing was not common at all.

The men at the guns had blisters on their hands from carrying and loading heavy shells and cartridges and were often themselves under enemy artillery fire. Yet, they carried on relentlessly.

No soldiers better than these exist anywhere in the world.

The credit for bringing glory to the regiment of artillery goes equally to the BC and OP parties for their steadfastness and courage under relentless enemy automatic weapons and artillery fire and to the valiant gun crews for their untiring efforts in providing continuous artillery fire over long duration despite adverse high altitude conditions. 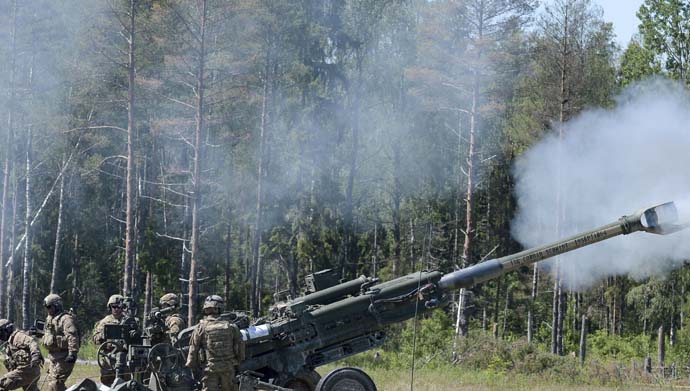 In the end, the nation owed the victory in the Kargil conflict to the blood and guts of its valiant infantrymen and to the stupendous firepower of the Gunners.

The regiment of artillery has a glorious record of past achievements — and it can look forward to the future with pride and confidence, confidence in the capabilities of its guns and missiles, confidence in the ability of the men behind the guns to fire them with traditional courage and professional competence. Indeed, the future holds no terror for the gunners. The gunners have a knack of rising to the occasion to overcome each new challenge by dint of sheer hard work and dedicated training.

Be it the acquisition of new equipment, changes in tactical doctrine or being assigned new roles in counter-insurgency operations, the gunners' renowned flexibility of mind and plans can take everything in its stride.

From a supporting arm with the limited role of neutralising large areas of the ground with its inherent dispersion of fire, artillery has graduated to an arm of decision on the modern battlefield. This is something the Indian artillery has earned by virtue of its performance during Operation Vijay in the Kargil district of J&K in 1999. Its role is now that of the purveyor of destruction in defensive as well as offensive operations. It is now well recognised that without large-scale degradation of the enemy’s defence potential over prolonged periods, no offensive operation is likely to succeed.

The Indian artillery will continue to play a leading role in the successful execution of integrated land-air operations on the modern battlefield.

The emerging philosophy of employment of artillery firepower visualises the synergised orchestration of all firepower resources across the length and breadth of the battlefield to cause destruction, systematically degrade the enemy's fighting potential and suppress specific combat echelons of the enemy from operating effectively for limited durations. The concentrated application of massed artillery fire and the use of precision-guided munitions will disrupt the enemy's cohesion and ultimately break his will to fight.

Also read: Kargil: How the best tribute to our Indian heroes came from an awestruck Pakistani

Post your comment
#Operation vijay, #Kargil war, #Indian Army, #Artillery
The views and opinions expressed in this article are those of the authors and do not necessarily reflect the official policy or position of DailyO.in or the India Today Group. The writers are solely responsible for any claims arising out of the contents of this article.