Will the Lingayat gamble work in Karnataka or start a Hindu vote war?

History has it that the BJP benefits every time the narrative shifts to religious undertones.

The newly appointed Congress president Rahul Gandhi is a man with considerable work at hand, and joining him is the incumbent chief minister of Karnataka, and his army of strategists and political heavyweights from the state, to chart out strategies for the next battleground in Karnataka.

The battle is due in April, and a broth for an intense fight has already been set. The elections are bound to be eagerly watched, as it is the only big state held by the Congress and for the BJP, a win here would pave its entry to the south. And being just months before the general elections, Karnataka is certain to send ripples up to Delhi.

So far, Karnataka CM Siddaramaiah, has stirred emotional waters with his Kannadiga pride issue, flagged identity politics by portraying himself as an Ahinda (an acronym for minorities, backward classes and Dalits) leader, created a cult for himself as a populist leader, reshaped Congress to an aggressive, street-smart regional outfit, not wary of gambling with parochial nationalism, and claimed social equity as his central plank. But probably, his biggest controversial and risky move has been his eagerness to side with the demands of Lingayats to be identified as a separate religion, and thus a minority status.

The Lingayat movement for separate religion status is likely to become one of the deciding factors in the upcoming elections. And an astute politician like Siddaramaiah, had set the cat among the pigeons by backing this demand and sending the proposal to the state minority commission. And after an initial inertia and indecision, the BJP has decided to go all disruptive in this elections. The likely decision to ask BS Yeddyurappa to contest from Vijayapura or Bagalkot districts in north Karnataka, is seen as a step in that direction.

North Karnataka is an electorally significant region dominated by the Lingayat community. Making Lingayat strongman and the party's chief ministerial candidate to contest from the north, could impact 12 districts (96 constituencies) with good loyal Lingayat base. While this has left the Congress flummoxed, the party surely has made its mind to give the BJP a taste of its own medicine. There is a possibility that CM Siddaramaiah, might leave his Mysore base and shift north to upset the BJP’s chances in the region.

Realising the importance of the region, the Congress is definitely not willing to let it go easy for the BJP. It constituted an additional working president's post in the Karnataka Pradesh Congress Committee for SR Patil, whose job will be to focus on north Karnataka.

The issue has been festering for decades. It gained momentum when the proponents for delinking Veerashaiva from Hinduism exhorted their community members to opt for "Other" in the column for religion during the 2011 Census enumeration. That's one reason the 2011 Census records the Lingayat population at 56 lakh (9 per cent) though the community makes up 17 per cent of the population of Karnataka and is the largest in the state, followed by the Vokkaligas. The BJP has so far remained tight-lipped about the backing given by the head of the Siddaganga Mutt, the spiritual headquarters of the Lingayats, for a separate religion tag and break away from the Veerashaiva sect. The BJP’s apprehension to take on the spiritual leader stems from the fact that Lingayats form its largest support base in the state.

Traditionally and culturally, Lingayats have identified themselves as an off-shoot of Shaivism, something that has grown culturally very different from parent Hinduism, just like Buddhism. The CM chose to use this issue to his political advantage, as being from backward Ahinda community, he is a "persona non grata" among the Lingayats. His open support to the community’s demand has upset many political equations in the state.

The Congress garnered about 15 per cent of the total Lingayat votes in the previous election. In normal circumstances, this could rise by another 5 per cent because of efforts of community's ministers MB Patil, Vinay Kulkarni, Sharan Prakash Patil and  Basavaraj Rayareddy. The open support to Lingayat demands could probably add some more in this. The CM’s support has managed to fragment the Lingayat votes and drive a wedge among the mutts.

If there is anything certain about this elections, then it is BJP’s open tryst with Hindutva. And no sooner it realised that the Congress is steadfastly holding to its grounds in the state than it unleashed the constant reminders in the form of strong pro-Hindu messaging, and its Hindutva poster boy Yogi Adityanath seems to just fit the bill.

Contrary to Siddaramaiah’s well-crafted "Kannadiga pride" issue, the Hindutva is fast becoming the choice of weapon of both the Congress and the BJP. As the euphoria of the elections nears its peak, Hindutva has suddenly taken over all the other issues. 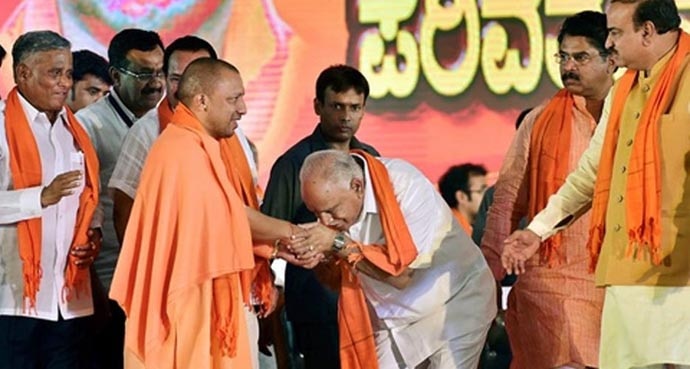 Siddaramaiah had made his choice of playing the BJP’s game in BJP’s battleground clear, as early as in 2017, when he started stirring emotional water and playing parochial nationalism with state flag and Kannadiga identity.

Cut to 2018, it seems that he has just embroiled himself in an imbroglio, politically termed as Hindutva. This is not just the BJP’s battlefield, this is the battlefield where it has remained unvanquished.

To some, the Congress’ decent run in the Gujarat Assembly elections could be behind the apparent shift in stance. Karnataka could also see an extension of Rahul Gandhi’s temple- hopping spree, in an attempt to shed Congress’s pro-minority image. But BJP has its best gun out - "Project Adityanath" has gone national to take every political battle to its claimed territory. And history has it that the BJP benefits every time the narrative shifts to religious undertones.

Lingayat debate in the Hindu heartland

The BJP’s answer to Siddaramaiah’s Ahinda politics could be Hindutva, but it will be interesting to see how the Lingayat religious identity debate shapes in the times of rising Hindutva in the state. Lingayat separate religion demand is old, but has found a new momentum, which has shaken Karnataka political narrative.

As the election peaks, the debate will gain more momentum. While the BJP has already started flirting with the Vokkaliga mutts and spiritual leaders, by making their major poll plank and turning Karnataka into a Hintudva battlefield, they look to topple the apple cart of the Congress and its big gamble, by painting this support as a grand conspiracy of the Congress to divide Hindus.

In the coming days, Siddaramaiah will have his task cut out, not to yield to the BJP’s Hindutva politics and let his Lingayat gamble get painted as a nefarious move to divide the Hindus and to be the leader setting the political narrative in the coming elections.

Siddaramaiah, definitely has a tightrope to walk on, but if he does, he would have created a cult status for himself, and some magic the Congress desperately needs.

Also read: Why Siddaramaiah is the Rahul Gandhi of Karnataka

Post your comment
#Lingayats, #BJP, #Siddaramaiah, #Karnataka Assembly polls
The views and opinions expressed in this article are those of the authors and do not necessarily reflect the official policy or position of DailyO.in or the India Today Group. The writers are solely responsible for any claims arising out of the contents of this article.