The MLAs were instructed to confuse mediapersons about their destination.

At the meeting of the Congress legislature party on Wednesday, the MLA-elects were asked if they had got feelers from anyone belonging to the BJP camp. 12 of them reportedly raised their hands. Everyone was advised to install voice recording apps on their mobile phones so that the future conversations can be recorded.

Aware of the trap, the Ballari group, which is entrusted with the task of calling up Congress MLAs, has started calling up the relatives and friends of the Congress legislators. The Congress alleges that the pressure is being mounted on the families to convince the MLAs to quit the Congress-JD(S) camp and move over to the BJP.

This is just an example to show the kind of cat-and-mouse game that is playing out in Karnataka at the moment. To add to the discomfiture of the  Congress, security was withdrawn from the Eagleton resort in Bidadi on the outskirts of Bengaluru on Thursday evening. This is where all the Congress legislators have been housed.

“Any MLA has to be provided protection. But then let this temporary government do what it wants to do. It is only a matter of time before it goes,'' said KH Muniyappa, Congress MP from Kolar.

This followed the transfer of select IPS officers by BS Yeddyurappa. He got in two new officers to man the Intelligence department, an indication of his emphasis on collecting reliable political intelligence.

In a significant move, he transferred the SP of Ramanagara district where Eagleton resort is located and posted a new officer of his choice. That is probably why the Congress decided to shift its legislators.

The original plan was to fly the MLAs to Kochi. In anticipation, the tourism minister of Kerala even extended an open invite over Twitter, promising to take care. But the Congress camp claimed that the chartered flights were denied permission to take off. Civil aviation minister Jayant Sinha tweeted that no DGCA permission is needed for domestic charter flights, but prior approval from the local ATC, in this case, Bengaluru is needed.

Domestic charter flights do not require DGCA approval. They have to get their flight plan approved by local Air Traffic Control and then are free to fly. We will get a detailed report tomorrow and provide all the facts. https://t.co/ZpWE3ZqrwB

It was a little after midnight. A few buses exited the Eagleton resort gates. The MLAs were instructed to confuse mediapersons about their destination: Puducherry, Kochi, Vizag.

But when they got on to the Bengaluru-Hyderabad national highway, it was clear that the Telangana capital, 550km away, had been chosen as the temporary location to safeguard the Congress-JD(S) flock.

In a strange way, once the MLAs were in Andhra territory, they felt more reassured. This was possibly because N Chandrababu Naidu is no longer pally with the BJP, and in fact, his Telugu Desam had worked to ensure that the nearly one crore Telugu population in Karnataka did not vote for the BJP. At dawn, the legislators were seen taking a stroll on the outskirts of Kurnool town, 210km from Hyderabad.

The previous evening, the Congress camp feared that two of its wickets were down even before it left Bengaluru. With the BJP reportedly going after those MLAs facing CBI or Income Tax cases, Ballari district MLA Anand Singh was the first to go incommunicado, not even signing on the letter expressing support for HD Kumaraswamy as the CM.

#WATCH Congress MLAs changing buses on #Hyderabad Highway. The MLAs along with JD(S) MLAs will be staying in Hyderabad #KarnatakaElections2018 pic.twitter.com/eUk3dFd4yq

Kumaraswamy claimed that pressure was being mounted on Anand Singh that the full force of investigating agencies will be on him, if he did not cross over. Singh incidentally was with the BJP till January this year, when he moved to the Congress and won the election on a Congress ticket. He was arrested twice in illegal mining cases, in 2013 and 2015.

Pratap Gouda Patil from Raichur district - again someone who has been with the BJP in the past - is another one to have gone missing. Though JD(S) sources suggested that he had been whisked away by the Reddy brothers, Madhu Goud, AICC secretary in-charge of Karnataka claimed that Patil was still in touch with the Congress. 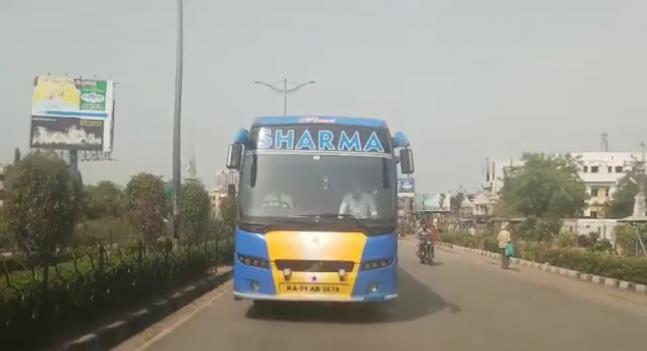 The ten Lingayats who have got elected on the Congress ticket are the other targets on the poaching list. The aim is to exploit the Vokkaliga-Lingayat traditional rivalry and play on the insecurity of these MLAs to work under Kumaraswamy, a Vokkaliga.

But it is not as if it is all hunky-dory in the BJP camp. Despite Yeddyurappa's outward show of confidence, a senior BJP leader admitted getting the numbers is “proving to be quite a challenge''. There is also the apprehension that this naked pursuit of power despite not having the numbers, will affect the party's image.

Supporters of BJP MPs in south Karnataka, a Vokkaliga stronghold, are already worried how this will play out in the Lok Sabha elections, less than a year from now.

At the time of writing, the Congress has booked rooms at the Park Hyatt (owned by senior Congress leader and industrialist T Subbirami Reddy) and Taj Krishna hotels in Hyderabad. Park Hyatt incidentally is where the Sunrisers Hyderabad team also stays. With the IPL and the Karnataka Political League under the same roof, there will be a lot of power play on show.

Also read: Why BJP shouldn't have been allowed to form government in Karnataka

#Horse-Trading, #BJP, #Congress-jds, #Karnataka elections
The views and opinions expressed in this article are those of the authors and do not necessarily reflect the official policy or position of DailyO.in or the India Today Group. The writers are solely responsible for any claims arising out of the contents of this article.