How are Rajput Karni Sena and RSS any different from what they imagine Aurangzeb to be?

That the right wing in India has no sense of history is being proven daily on the streets of cities across India as Karni Sena and its clones threaten the screening of Padmaavat. They want to ban a movie they have not seen. And they want to protest the depiction of their clan though they do not know details of how it is portrayed.

This is in keeping with their lack of knowledge of history. Or rather, as Audrey Truschke points out in an earlier piece for DailyO, the skewed colonial history that was taught to us all. As she notes: "The story of how Aurangzeb became India’s most maligned king begins in the British colonial period. In brief, the British wanted to point to Indian rulers who were even worse than themselves in order to justify the horrors of colonialism. So they painted a skewed picture of Aurangzeb, often misrepresenting his alleged worst crimes. Many Hindu nationalists today think that hating Aurangzeb is a distinctively Indian feeling, but such sentiments are perhaps more aptly described as a colonial inheritance."

For the right wing, Aurangzeb is seen as the epitome of everything evil. Not only do they see him as a destroyer of temples (though he built more temples than he destroyed), but also as the man who imposed the dreaded jizya tax and disliked music and art. In asking for the boycott of Padmaavat, the RSS has shown that it is no less than Aurangzeb - they hate the very thing he is said to have abhorred.

So, do we become what we hate most? It would seem so. 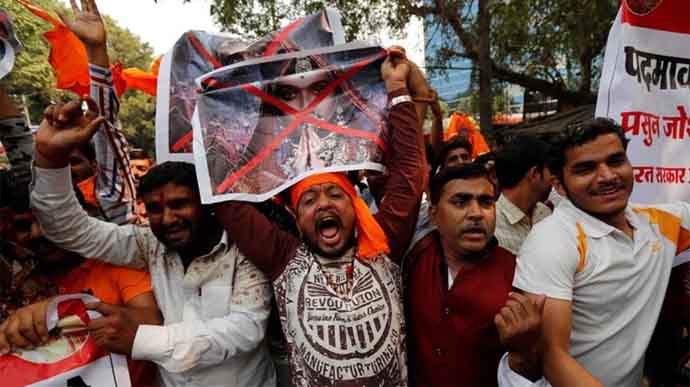 No matter that Aurangzeb's name is sought to be erased by the BJP from Indian history (though he ruled quite successfully for almost half a century) and that no less than Prime Minister Narendra Modi took his name when he spoke disparagingly of Rahul Gandhi recently, he has become the epitome of what a "bad Muslim" can be.

So, if we are to believe the history that has been taught to us, and is now forwarded through WhatsApps, we should assume the RSS and Karni Sena are Aurangzeb's true heirs. That is also not quite true though - music wasn’t proscribed even in Aurangzeb’s court. The emperor’s own coronation anniversaries were marked by both musicians and dancers. Not only that, his patronisation of music meant that a number of dhrupads were composed in his name. In the Mirat-e-Alam, Bahktawar Khan wrote of the Emperor having a “perfect expert's knowledge” of music.

In Padmaavat, Alauddin Khilji is shown as feeding those pages of history to fire that don't bear his name. If history were to be rewritten to suit those in power, we would have as many versions of it as we have had rulers. Will burning buses and protesting at cinema halls change Rajput history?

The irony is that Sanjay Leela Bhansali has made a film that celebrates every virtue the Rajputs hold dear - including a very emotive sequence at the end when Rani Padmavati leads her army of women into the flames, choosing jauhar over falling into the arms of Khilji.

If their objection is that the film portrays a sort of "love jihad", they couldn't be more wrong. Arjun Appadurai speaks of the "fear of small numbers", the idea that a small minority is standing in the way of a great people from fully embracing their nationalism. It is exactly what is happening here. Khilji's existence is supposed to stand in the way of Rajput's embracing their idea of who they are, or ought to be.

Now if that is not a majoritarian mindset, what is? How does it make the Karni Sena or RSS any different from what they imagine Aurangzeb to have been?