Indian govt has rushed into the Kartarpur Corridor in inexplicable haste. It will repent at leisure

It isn't quite clear if Prime Minister Narendra Modi has been deeply influenced by his Pakistani counterpart who has earned the sobriquet of 'U-turn Khan', or if it is the other way round. Because when it comes to Pakistan, and to an extent, Kashmir, it has become difficult to keep count of the U-turns made by the Narendra Modi government.

Worse, while Mr Modi's devotees marvel at his ability to surprise everyone by his U-turns (especially on Pakistan), the fact is that he invariably ends up getting rude surprises of his own — the Pathankot attack that followed his Lahore visit is emblematic of this trend.

If there is one defining characteristic of Mr Modi's Pakistan policy, it is a flip-flop approach. But, aside of the lack of policy clarity that this approach underlines, what is more worrying is the fact that every policy flip inevitably leads to a policy flopping. Who's the U-turn king? It has become difficult to keep count of the U-turns made by the Narendra Modi government. (Photo: MEA)

The latest U-turns have been made on two of the most serious and sensitive foreign and security policy issues confronting India.

The first, of course, is the decision of the government to bite the Pakistani bait on the Kartarpur corridor.

The second is even more egregious: using a god-man (or is he a yoga entrepreneur?) to bring in a dubious former Norwegian Prime Minister to mediate/meddle in Kashmir, overturning the national policy of shunning any foreign or third-party interference. 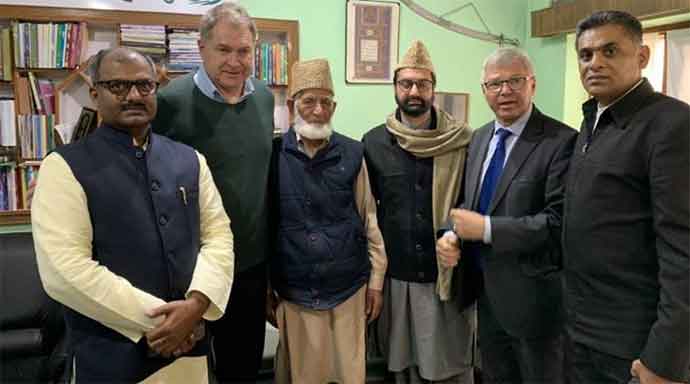 No one is quite sure as to what prompted these tectonic policy flips — is it vanity, is it sheer vacuity, is it some petty political point-scoring, ignoring the disastrous implications of what has been conceded by the government, is it megalomania or just mania, is it a sign that the Indian political establishment has totally lost the ability to think things through and look at issues strategically rather than tactically?

Honestly, your guess is as good as mine.

How utterly muddled the thinking is in the government is clear from the mixed signals sent on the Kartarpur issue. There is the usual hyperbole from the Prime Minister who has equated the Kartarpur Corridor with the fall of the Berlin Wall. But the External Affairs Minister excused herself from attending the ground-breaking ceremony of the Corridor in Pakistan because of prior commitments.

Strange, isn't it, that while something as epochal as the proverbial Berlin Wall is falling, the EAM is busy in some low-level political campaign! The analogy of the Berlin Wall collapsing is in itself quite bizarre. Do members of the ruling party have absolutely no sense of history when they draw such an analogy? While something as epochal as the proverbial Berlin Wall is falling, the EAM is busy in some low-level political campaign! (Photo: PTI)

Do they even realise the meaning of what they are saying? Perhaps not, given the appalling mindlessness which made the government pick the 10th anniversary of the 26/11 Mumbai terror attacks by Pakistan to organise the ground-breaking ceremony of the Corridor on the Indian side.

The speeches made at the ground-breaking ceremony don't however change the fundamental reality of India-Pakistan relations.

To put it very bluntly, the Iron Curtain on the Radcliffe Line isn't going anywhere, something borne out from India's refusal to attend the SAARC Summit until Pakistan ends export of terrorism.

Be that as it may, the question that isn't being answered by the Indian government is what prompted the U-turn on Kartarpur. Just a couple of months back, the government had brushed aside this gambit of Pakistan. But suddenly, the cabinet has given the green light to the proposal.

So, what changed in these last few weeks?

Was it some sort of international pressure? Was it an epiphany that prompted the Modi government to rush into something that even angels would avoid? Was it the old Prithviraj Chauhan syndrome or the saviour complex that afflicts every Indian leader who tries to pull Pakistan out of the hole it finds itself in?

Even more important is the question — why is Pakistan so keen to push ahead with this Corridor now? Surely it isn't that the Pakistan military is taken in by the grating garrulousness of the comic-cricketeer-politician Navjot Sidhu. Nor can it be the case that the Islamic State of Pakistan has suddenly been infused with the milk of human kindness and has become sensitive to the sentiments of Sikhs to agree to opening the Kartarpur Corridor.

There is also no evidence on ground that Pakistan has turned over a new leaf and is genuinely interested in making peace with India. If anything, the Pakistanis have been working overtime to reignite the flames of terrorism and separatism, not just in Kashmir but also in Punjab — the attack on the Nirankari congregation, the Khalistan propaganda in Pakistan and in Western countries, the entire Referendum 2020 programme bears witness to Pakistan's sinister game-plan.

And, despite such compelling evidence and intelligence on Pakistani perfidy — the portent of things to come became crystal clear when a notorious Khalistani was given the front seat in the Corridor inauguration ceremony in Pakistan — the government of India has displayed unseemly haste in biting the bait of the Kartarpur Corridor — why? While it is true that many Sikhs have for long demanded a corridor to Gurdwara Durbar Sahib in Kartarpur, they have also been demanding a Vatican-like status for Nankana Sahib. Gopal Chawla, a pro-Khalistan leader, was given a front seat in the Corridor inauguration ceremony in Pakistan. (Photo: Screengrab)

But the important thing is that while such pro forma demands are routinely made, there was neither any pressing demand, nor any movement for this Corridor at this point in time. Sure, a certain urgency was attached to the Corridor by the fact that next year is the 550th anniversary of Guru Nanak. But 50 years back, we had the 500th anniversary which, by all accounts, has far greater salience that the 550th anniversary.

If the Sikh faith could survive and thrive without the Corridor back then, the heavens wouldn't have fallen if there was no Corridor on the 550th anniversary.

Such is the recklessness of the Indian government that it went ahead and announced the acceptance of the Corridor proposal without first working out the modalities and operational details of movement of people in the corridor. Ruling party spokespersons reflect the cavalier and careless attitude of the current dispensation when they nonchalantly declare that these will be decided as things proceed.

In other words, India has agreed to start something without a clear idea on how that something will work on ground.

It is difficult to think of another example of such a lackadaisical, irresponsible and imprudent handling of a sensitive security and political issue, involving an implacable and inimical enemy country. The sheer obtuseness of the government to think things through and understand the minefield it was entering is quite astounding. This Corridor will become a bone that is stuck in India's throat which it will neither be able to swallow, nor vomit out.

Apart from the resentment that will brew in Punjab if there are controls and restrictions on the movement of pilgrims on the Corridor — the widespread public impression currently is that there will be free access — there is the entire spectre of Kartarpur Gurdwara being used to incite and instigate the Sikh pilgrims against India.

A perfunctory study of the Pakistani media should have been enough to apprise the government of what lies in store for India. But the obsession with emerging as a visionary, the desire to create tamasha and think that slick event management and media handling amounts to good politics and substitutes for performance, has forced India into Pakistan's trap.

While there will be problems if India is seen to be placing any kind of obstacle in the pilgrims' path — for instance, ruling party members are confidently proclaiming that if the Pakistanis engage in hostile propaganda, they will restrict movement or even close access to the Corridor — what is worse is the possibility that the Pakistanis will use access to the Corridor as a tool for blackmailing both the Indian state as well as Indian pilgrims.

But, given the fact that the Indian political class and the obsequious babus have the memory of a goldfish when it comes to Pakistan, we have walked into a trap with our eyes wide open and our brains completely shut.

Unlike India, which has virtually zero expertise on Pakistan, the Pakistanis know how to play the Indian politician — and the Indian media.

For a country that has faced repeated betrayals from Pakistan, and which has paid a heavy price for Pakistan's treacherous behaviour, it is nothing short of a historical blunder for the government to once again place faith in Pakistan.

India has accepted the Kartarpur Corridor in haste — it will repent this decision at leisure.