Why Modi government has gone back on its 'muscular Kashmir policy'

Union home minister Rajnath Singh on May 16 tweeted to declare a conditional ceasefire in Jammu and Kashmir as state's chief minister Mehbooba Mufti had sought a few days ago.

The Centre asks Security Forces not to launch operations in Jammu & Kashmir during the holy month of Ramzan. Decision taken to help the peace loving Muslims observe Ramzan in a peaceful environment.HM Shri @rajnathsingh has informed the Chief Minister, J&K of Centre’s decision.

Mufti's Jammu and Kashmir People's Democratic Party (PDP) and the BJP are equal partners in the state government. A day after chief minister Mufti made public her demands, the state BJP had publicly opposed a ceasefire even though they were part of the all-party meeting in the state where the issue was discussed. The ceasefire, albeit just for a month, was against the wishes of the security forces, particularly the Indian Army and even the Central Reserve Police Force - a paramilitary organisation deployed in J&K. Forces are apprehensive that terror groups like the Lashkar-e-Taiba (LeT), Jaish-e-Mohammed (JeM) and Harkat-ul-Mujahideen (HM) can use the respite to regroup. More importantly, however, the ceasefire signals a rethink or even a rollback of the Modi government's "muscular J&K policy".

In 2014, a few months before a dialogue between the top diplomats of India and Pakistan was called off after the Pakistan high commissioner met Hurriyat leaders, a senior government functionary told me what it would entail. "The new policy," he said, "was simple, no repeating what has been done before, no talks, no soft peddling."

At the centre of the Kashmir dispute is a violent form of political Islam and the time has come to challenge it squarely, a senior officer who still reports to Rajnath Singh, had told me while explaining the need for a muscular policy in J&K. Recently, chief of Army staff general Bipin Rawat summed up the new policy when he said, "In fact, I wish these people, instead of throwing stones at us, were firing weapons. Then I would have been happy. Then I could do what I (want to do)."

Four years on, the situation in the Valley isn't encouraging. Crowds at funerals of terrorist are growing. Pictures and videos of gun wielding terrorists exhorting others to join-in are now an almost every day feature.

I wonder what was told to Rajnath Singh now which made him take the decision?

When in Opposition, the BJP and the RSS had blamed the Manmohan Singh government for being soft on terror and Kashmir. And, following the "muscular" policy the Indian Army restarted the "Cordon and Search Operations" (CASO) under which entire villages are cordoned off and searched. The practice was stopped in 2000s after the government and the Army came to came the conclusion that CASO yielded little result while it inconvenienced people more and that it needed to win hearts and minds.

Now, CASO and Search and Destroy Operations (SADO) of the security forces stand suspended because of the ceasefire. This at a time when casualties are not only high but the coming summer in the Valley, security agencies predict, will be hot and violent. At least 48 local boys have joined terror groups in the last four months and 22 more are missing and believed to have joined terror groups. In just four-and-a-half months, 29 Indian Army soldiers have been killed.

The more things change, the more they remain the same

A "muscular J&K policy" and ceasefire has happened earlier too. When the Modi-led NDA government refused to engage the Hurriyat, the separatist group in J&K, the group had been pushed into irrelevance. A ceasefire was announced in the past as well when Atal Bihari Vajpayee announced the Non-initiation of Combat Operations (NICO) in 2000. Then too, like now, the forces were told to "open up" only when they were attacked or when they had specific lead about a terrorist hiding in a specific house. 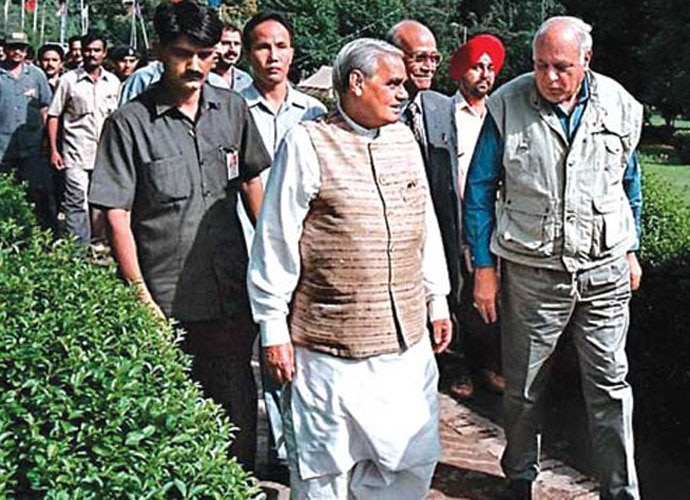 While the results weren't encouraging, he followed it up with his famous insaaniyat (humanism), jamhooriyat (democracy) and kashmiriyat (Kashmir's legacy of amity). Like Prime Minister Modi's Lahore initiative, when he dropped in to visit his Pakistani counterpart Nawaj Sharif, en route from Kabul — others too like Vajpayee and Manmohan Singh made similar initiatives rightly or wrongly. The only difference between then and now: neither was vitriolic about the other's policy.

There was of course criticism and debate. They understood governance and foreign policy was an ongoing never-ending process. And most importantly, each was laying the foundation for others to build upon. Spin doctors will surely say all this was planned. After all, the prime minister will be in Kashmir on May 19 to inaugurate developmental projects. To be fair, Prime Minister Modi did allude to Vajpayee in his speech in Kashmir. But on the ground, the policies and intention appeared at variance.

Until now speaking to those responsible for the Kashmir policy gave a sense that Kashmir was important, but perhaps the people of Kashmir weren't on the top of the list of policy makers. The ceasefire announced yesterday for Ramzan is surely a step that recognises, even if minimally, that people of Kashmir are more important. People of J&K were at the centre of Vajpayee's "Insaniyat policy" and it still resonates in the Valley.

Finally, one cannot but draw parallels with the recent Wuhan Summit where Prime Minister Modi and Chinese President Xi Jinping met after an unprecedented freeze of relations between the two Asian giants.

After the summit, the Indian Army and Indo-Tibetan Border Police were told not to be aggressive with their Chinese counterparts should they meet each other while patrolling the 3,488km long disputed border. With the 2019 elections to Parliament just months away, cooling down tempers along the borders and avoiding another stand-off is a smart move, according to experts.

One wonders whether the sudden Kashmir ceasefire has a similar intent?

Whatever be the truth, the "muscular J&K policy" appears to have been all but folded-up at least temporarily.

Also read: Kashmir's Ramzan ceasefire is total foolishness, which will only hurt our security forces