Kim Jong-un’s China visit: What could be in store for the rest of the world

For China, a unified Korea with close ties to the US is undesirable, as it could enhance threat perceptions and have the US at its doorstep.

North Korean leader Kim Jong-un’s secretive three-day visit to China by a special train was confirmed by the media on both sides post his return. This was his first visit to any nation after his assumption to power in 2011. Pictures released in the Chinese media showed a relaxed Kim smiling and waving during the visit.

A statement accredited to him but issued by the Chinese press read, "It is our consistent stand to be committed to the denuclearisation on the peninsula. The issue of denuclearisation can be resolved if South Korea and the United States respond to our efforts of goodwill, create an atmosphere of peace and stability while taking progressive and synchronous measures for the realisation of peace."

It is indicative that he would place the demands which they would have to accept, if peace is to return. 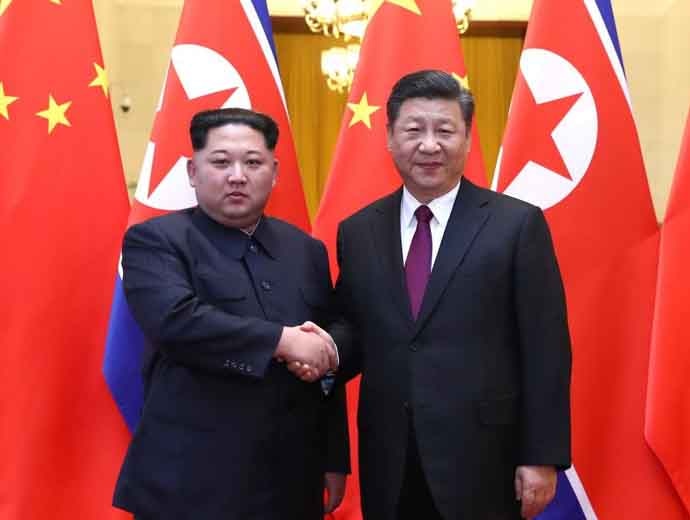 During the visit, Kim held talks with Xi Jinping on the existing situation and the proposed talks with his South Korean counterpart and the US president. Media reports indicate Kim making copious notes during his interaction with Xi. Kim is expected to meet South Korean President Moon Jae-in on April 27, followed by a summit with US President Donald Trump. Japan has also indicated a desire for a direct summit, discussions on which have yet to commence.

China had always been a major trading partner and close ally of the country. In recent times, there were reports of a fade in Chinese influence, compelling China to support sanctions against the regime. This visit indicates a possible thaw in their relationship. Reports state that the visit was undertaken on an invitation extended by Xi.

Post the visit, a message sent to the US by China stated that "the visit went well". This visit and the bonhomie visible indicated that China would play a key role in any resolution concerning North Korea.

For China, a unified Korea with close ties to the US is undesirable, as it could enhance threat perceptions and have the US at its doorstep. At the same time, a belligerent North Korea, unwilling to toe its line remains an equal threat. Thus, while it would desire a resolution of the crises, it would desire it on its terms, where the North remains as a buffer between US-aligned South and China. Simultaneously, the North remains a close ally. Hence, ensuring the survivability of the regime is essential.

Russia is also in the process of moving closer to the North. There are reports of the North Korean foreign minister travelling to Moscow shortly, well before Kim Jong-un meets his southern counterpart. This would bring Russia and China on the side of the North, taking advantage of the growing rift between the US and them. Kim is also aware that with the ongoing diplomatic cold war, the US would never be able to push any further sanctions through the security council.

President Trump and his advisors have been stating that the only way forward is for North Korea to roll back its nuclear weapons programme, an action which is very unlikely. The new US national security advisor, John Bolton, even went on to state that North Korea, akin to Libya should surrender its nuclear material to the US. He had for long been advocating employment of military force.

China would now be possibly the only nation, other than North Korea to be aware of the true status of the North Korean nuclear weapons programme. While North Korea may still lack relevant technology for re-entry of its missiles, however it is in a state to threaten South Korea and Japan and has proved it in recent tests. Hence, it is assured of its survival. Surrendering its only means of survival is clearly unlikely.

This issue would have been discussed in detail with China. China aware of US long-term intentions would never have suggested that the North accede to surrendering its nuclear weapons, despite all pressures. With Chinese and Russian backing and the fact that most North Korean nuclear installations are located close to the Chinese border, the possibility of US launching military strikes are almost nil.

China, would have suggested only capping on future tests. This would ensure that no US government ever attempts to overthrow the regime. Alongside that would be a demand to lift sanctions. This may be unacceptable to the US, but would be enough for China and Russia, already at daggers with the US to insist on partial lifting of sanctions at the UN. Even if vetoed by the US, China and Russia would begin supporting the regime to ensure it survives.

China would also have suggestions on limits in North’s conversation with the South. In this case, it would be a desire to open borders, reduce tensions and increase economic cooperation. The two sides should also declare an end to hostilities, which have remained in place since the Korean war. This would come at a cost, which would include reduced US deployment and cessation of joint exercises with them. Most importantly would be withdrawal of US THAAD missile systems.

Kim is being benefitted with the increasing distance between the US on one side and Russia and China on the other. He would seek to use that advantage to his benefit. China would be seeking to ensure that North Korea remains a nuclear power, always at a distance from the US, dependent on it for economic and diplomatic support. It would also push the North to be more open towards the South seeking to move the US away from the peninsula.

Russia would desire embarrassment of the US by creating conditions for Trump to walk away in frustration. How the US reacts is what the world is waiting for.

Post your comment
#US, #China, #North Korea, #Kim Jong-un
The views and opinions expressed in this article are those of the authors and do not necessarily reflect the official policy or position of DailyO.in or the India Today Group. The writers are solely responsible for any claims arising out of the contents of this article.