The “mentally deranged US dotard” has met his match in the “little rocket man”. US President Donald Trump and North Korean ruler Kim Jong-un have kept the world on the edge with their unpredictability and volatility. Such has been their fickleness that the US-North Korea relations have swung 180 degrees from the brink of a war to a historic face-to-face dialogue in Singapore on June 12.

It is interesting to see the turn of events. Enraged by Kim’s missile tests, Trump tweeted on April 9, threatening Pyongyang of “fire and fury like of which the world has never seen”. On April 11, he upped the ante by saying: “Military solutions are now fully in place, locked and loaded should North Korea act unwisely. Hopefully, Kim Jong-un will find another way.” In his maiden speech at the UN General Assembly on September 18, 2017, Trump said that “the rocket man was on a suicide mission”, and threatened to “destroy North Korea”.

Kim didn’t hold back either. Pointing out that “a frightened dog barks louder”, he called Trump a “political heretic... unfit to hold the prerogative of Supreme Commander” and “gangster fond of playing with fire”. A day after Trump’s UNGA speech, Kim returned his compliments, he would “surely tame the mentally deranged and mentally dotard with fire”.

The North Korean threats weren’t just verbal. On September 28, 2017, Pyongyang successfully launched its intercontinental ballistic missile, Hwasong-15, which David Wright, a missile expert, thought had a range of 8,078 miles that could reach Washington and other American cities on the West coast, Europe, Japan and Australia. As expected, the US, Russia, China and European countries expressed their concern. According to Melissa Hanham of the James Martin Institute of Non-Proliferation Studies, it was the North Korean way of saying “we have achieved what we wanted”.

Was this the Cuban Missile Crisis moment for Trump and Kim? Like John F Kennedy and Nikita Khrushchev, haven’t they pulled back from the brink of a precipice? They seem to be practising realpolitik: put maximum pressure on your opponent before going for talks, and engaging the enemy from the position of strength, not of weakness!

Besides Trump and Kim, the credit for diffusing the situation should go to the Chinese and South Korean Presidents. In August 2017, Moon Jae-in said, “There must be no more war on the Korean peninsula. Whatever ups and downs we face, the North Korean situation must be resolved peacefully. I am certain the United State will respond to the current situation calmly and responsibly in a stance that is equal to ours.” It was the strongest public message to the US. 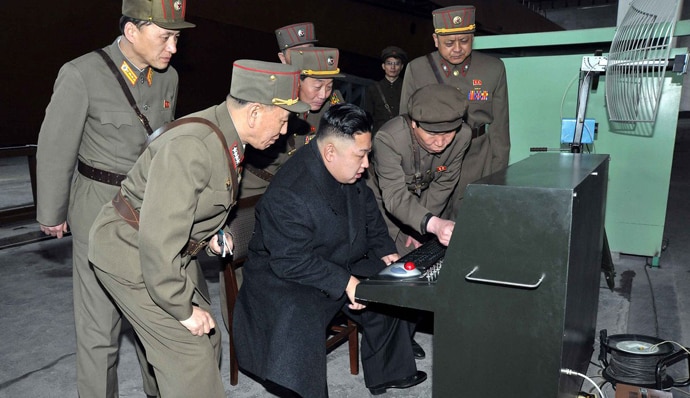 Chinese President Xi Jinping, whom Trump has constantly been pushing to stop Kim from launching missiles, has twin objectives: to ensure that the beleaguered North Korean regime doesn’t collapse in spite of sanctions; and, the Trump-Kim verbal salvos don’t degenerate into an open conflict that will invariably force China to take a side. China’s crucial role is underlined by Kim’s second visit to China as early as last week.

The historic summit between the North and South Korean Presidents on April 27 has gone reasonably off well, despite some last-minute hiccups. Warm handshakes, bear hugs and positive words said it all. President Moon hailed a “new era of peace” and pledged, “There will be no more war on the Korean peninsula”.

But does it means the same thing about Trump and Kim? Kim shares an ambitious reunification dream. “Using one language, one culture, and one history South and North Korea will be reunited as one country, thus enjoying everlasting peace and prosperity.” In this backdrop, and given the turbulent history and interests of the US and China, only time will tell how far and how fast Moon and Kim can move. Nonetheless, they intend to “gradually realise arms reduction when the military tension is removed and trust is practically established”.

A lot, however, will depend on the outcome of the Trump-Kim summit on June 12. Mindful of the fate that befell Colonel Gaddafi, total surrender by Kim of all his nuclear weapons looks unlikely. Above all, Kim will demand security of his regime. Trump’s decision to withdraw from the Iran nuclear deal and re-impose sanctions on Iran might heighten Kim’s apprehensions about any denuclearisation deal with the US. A drastically amended version of the Iran nuclear deal guaranteed by China, South Korea and Russia could possibly have been a workable template.

As for Trump, he hasn’t opened his cards except uttering some conciliatory words about Kim after the return of three imprisoned Americans. But he realises that, thanks to strong opposition from South Korea and China, any punitive action against the North is unrealistic.

In that sense, Trump’s pressure on Kim may be working to an extent, but he is equally being influenced by powers like China. And, it is still a long way before the North Korean crisis is suitably resolved. For, Kim may still trump the US.