The state’s brush with coalition politics started in 1983 but going by the current state of affairs, political alliances continue to have a poor track record in Karnataka.

Every time a coalition government takes shape in Karnataka, its premature end is predicted by political pundits.

When the Congress and Janata Dal (Secular) joined hands to form the government in May 2018 by setting aside their political differences, none expected the coalition to last for more than two years. As predicted, the coalition fell apart after 14 months owing to rebellion, growing mistrust between the two partners and because of the BJP’s involvement to an extent. The political history of Karnataka shows that no coalition government has been able to complete its full term owing to various reasons. No coalition has been able to crack the formula to run the government for a full-term. Even political mavericks like former PM HD Deve Gowda and the late Ramakrishna Hegde could not handle coalition politics properly. 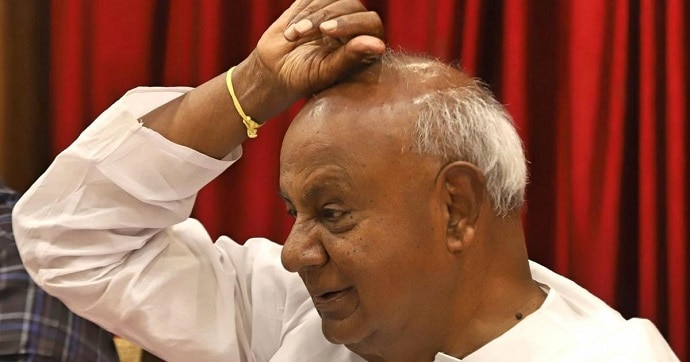 Even Deve Gowda could not crack the coalition politics in Karnataka. (Photo: IANS)

Karnataka’s brush with coalition politics started in 1983 when Hegde (Janata Party) formed the government with outside support from the BJP and Independents. However, just before completing two years in office, Hegde resigned after his party did not perform well in the Lok Sabha polls.

For about two decades, Karnataka did not see any coalition governments. But when the voters delivered a fractured verdict in May 2004, the Congress and JD(S) formed a government with Dharam Singh from the former party named CM.

However, the bonhomie didn’t last long with Deve Gowda’s son HD Kumaraswamy staging a coup to oust Singh from the CM’s post in February 2006. Eager to occupy the CM’s post, he forged an alliance with the BJP despite strong objections from his father. The JD(S) and BJP made a power-sharing agreement as part of which leaders from both parties would serve as CMs. After completing his agreed 20- month-term as the CM, Kumaraswamy, honour-bound to hand over the baton to BJP’s BS Yeddyurappa, refused. The government collapsed leading to President’s Rule followed by-elections. Later, Yeddyurappa returned to power with full majority. In May 2018, when the Congress lost power, it checkmated the BJP by requesting the JD(S) to form a coalition government by offering the CM’s post.

However, it failed to resolve many issues in the beginning. Though Siddaramaiah was appointed as the head of the coalition coordination committee, neither he nor his followers hid their aspirations for power.

It is interesting to note that three of them are among the 15 MLAs, who rebelled and resigned. The pre-poll alliance between the Congress and the JD(S) for the Lok Sabha polls also wasn’t stitched properly. The blame game continued culminating in the resignation of 12 MLAs from the Congress and three from the JD(S).

#Kumaraswamy loses, #Yedyurappa, #Trust vote, #Karnataka mlas resign
The views and opinions expressed in this article are those of the authors and do not necessarily reflect the official policy or position of DailyO.in or the India Today Group. The writers are solely responsible for any claims arising out of the contents of this article.