Sangam of faith and ideology: Why the Kumbh Mela is so different this time

From being a facilitator, this time, the state administration is visibly 'hosting' the Kumbh. The RSS and Yogi Adityanath have their imprint firmly on the event, while Congress et al are missing from the scene.

The Kumbh is ancient, almost eternal. It has been organised for centuries at the same four venues — Prayagraj, Nashik, Ujjain and Haridwar. In modern India, it has been an event that the state and various sects of sadhus work hand in hand to organise.

But something is different this time. The Kumbh has certain features about it that stand out. Host of the Year? Yogi Adityanath has been very actively both in organising and participating in the Kumbh. (Photo: PTI)

The first striking thing is that this year, the state is working not merely as an organiser, but as a major stakeholder of the Kumbh. Yogi Adityanath, Chief Minister of UP — and himself a saint of the Nath Panth (a reformist sect of Hinduism) — is working actively and visibly to organise the Kumbh. He has projected himself as the ‘host’ of the Kumbh, and sent invitations to panchayat pradhans, chief ministers of other Indian states and common people to participate in it.

Thus, from a behind-the-scenes facilitator, this time, the state is the active 'host' of this grand event.

The second thing is that a lot of attention has been paid to the tourism potential of this religious-spiritual event. The UP government has heavily advertised it as a tourist destination. Big hotels and many other commercial groups have set up luxurious tents at the Sangam grounds. 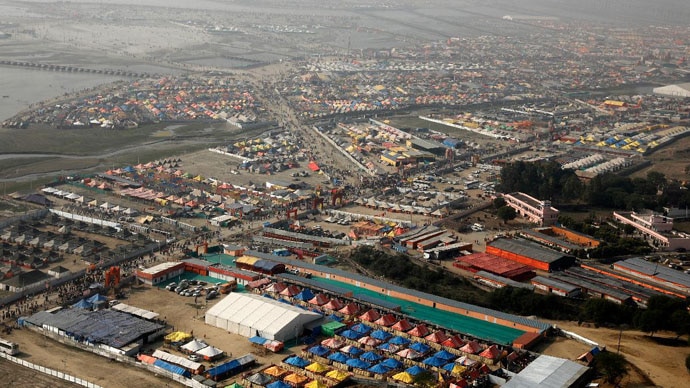 The intricate planning and organised infrastructure around the Kumbh have been widely discussed. (Photo: https://kumbh.gov.in/en)

Third, the celebration is being taken out of the boundaries of a purely religious exercise — and being linked to ideology.

To transform it from a Hindu religious event to a Hindutva ideological event, the UP government organised ‘ideology Kumbhs’ in different parts of the state — Yuva Kumbh in Lucknow, Mahila Shakti Kumbh in Vrindavan, Sanskriti Samaveshi Kumbh in Prayagraj, Sadbhav Kumbh in Ayodhya and Paryavaran Kumbh in Varanasi. At these events, the speakers and organisers linked modern ideas with the traditional meanings of Kumbh. They raised issues, such as women's empowerment, environmental protection and social harmony, and tried to situate them within the ideology of Hinduism.

Also, at this Kumbh, the Rashtriya Swayamsewak Sangh (RSS) is visibly active. Various affiliated organisations, such as the VHP, the Sanskar Bharati, Samajik Samrasata Manch and many NGOs related to the RSS have set up their camps here, and are organising ‘seva’ (service) programs. The VHP is working to mobilise sants and mahants on the Ram temple issue.

An important aspect is that these bodies are organising big cultural events in which the Northeast and tribal communities are receiving a lot of attention.

The RSS has organised a ‘Netra Kumbh’ (Kumbh for people who have eye ailments), in which check-ups, treatment and distribution of spectacles is being undertaken. They have an aim of treating 1.50 lakh people.

This is a form of ideological mobilisation through social service that the RSS seems to have learnt from Christian missionaries in India. 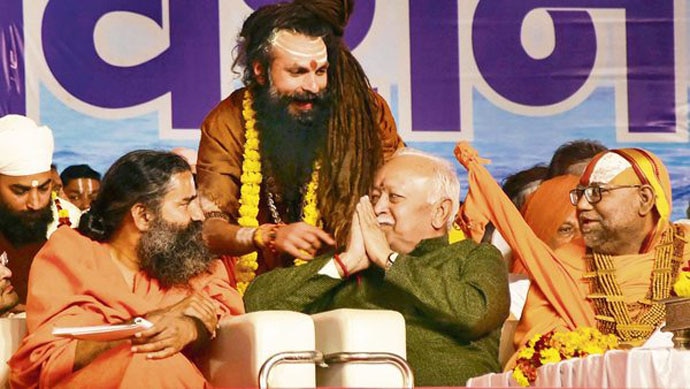 From the divine to the worldy: The VHP's 'dharm sansad' was organised on the sidelines of the Kumbh. (Photo: PTI)

It's also significant that there are no camps of any important political party, except the BJP, in the Kumbh Mela. As the party in power in UP, the BJP is obviously claiming credit for this ‘divya’ (divine) and ‘bhavya’ (grand) grand event.

During the freedom movement, the Congress would set up camps in various socio-cultural events. After Independence, the Congress forgot to link its politics with social service and became heavily dependent on bringing change only through instruments of the state.

Although Akhilesh Yadav has visited the Kumbh Mela, and there is news that Rahul Gandhi and Priyanka Gandhi might come too, their parties don’t have any social service camps at an event where crores of people are gathered.

The Kumbh Mela is undoubtedly a Hindu religious event — but it has always gone beyond just that. It has traditionally seen the participation of Buddhist saints, dissenting Hindu sects, such as the Kabir Panth and the Ravidas Panth, some Khalsa sects and other tribal and nomadic communities who don’t identify with Hinduism.

This time too, the efforts of the UP government have made the Kumbh about more than Hinduism.

But something is different this time. The Kumbh this year is not just a celebration of faith — it is clearly also a consolidation of ideology.

Also read: Ode to Allahabad: Kumbh is grand and gorgeous. But the city needs salvation

#RSS, #BJP, #Yogi Aditayanth, #Kumbh Mela 2019
The views and opinions expressed in this article are those of the authors and do not necessarily reflect the official policy or position of DailyO.in or the India Today Group. The writers are solely responsible for any claims arising out of the contents of this article.