Why BJP razing Lenin's statue is sad and shameful

Belonia sounds like a Russian name or like a poem by Alexander Pushkin in an old book of poetry with yellow pages, smelling of ancient forests and leaf storms. 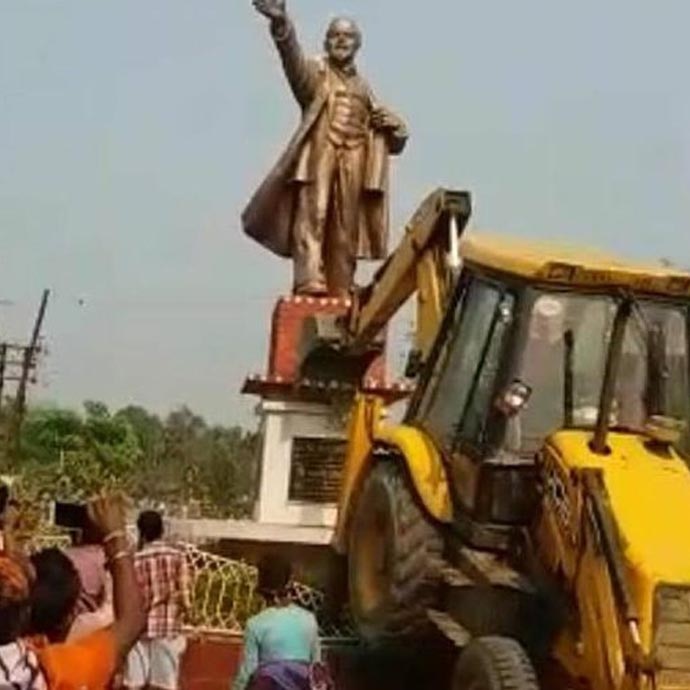 Lenin's statue in Belonia was brought down by BJP supporters.

Located in the extreme south of little Tripura, the border state adjoining Bangladesh where mappings of the line of control get blurred, like a geography which is at once suspended in time and space, the town of Belonia reportedly installed several statues five years ago to mark the heritage of Tripura, some of it influenced by the Bengali heritage. In 2013, the 21st year of Left rule led by the CPM in Tripura, several statues were reportedly installed in the town, including that of revolutionary poet Kazi Nazrul Islam, an icon in both east and west Bengal, Rabindranath Tagore, Swami Vivekananda, among others. At the College Square, a statue of Vladimir Ilyich Ulyanov (Lenin) was installed. Left supporters held public meetings near the statue.

Indeed, 2017 marked 100 years of the October Revolution in Russia. Hence, the ravaging of Lenin's statue by BJP supporters and leaders, video recorded in full public view, is at once a grotesque irony. It also marks the rise and rise of fascism in India, and the violent, pathological power of the one-dimensional neo-Nazi, backed by the mighty Indian state. Jyoti Basu, former Bengal chief minister, once called the BJP a party of "barbarians". The CPM will surely remember his words now.

Lenin is the legendary Bolshevik leader who spearheaded the Bolshevik Revolution by staging a coup in picturesque St Petersburg, founded the vast socialist empire of Soviet Russia, braved the Cold War with America which declared Russia and communism its first and foremost enemy, ignited the concept of world revolution in between the two World Wars, reinterpreted Marxism and its dialectics of theory and praxis, of radical social transformation, into specific Russian conditions, gave birth to the philosophical and strategic concept of Marxism-Leninism, inspired the peasant revolution, the long march and the protracted guerrilla war in China led by Mao Zedong, and set up the Communist International with Moscow as its headquarters and branches all over the world. Lenin is the legendary Bolshevik leader who spearheaded the Bolshevik Revolution by staging a coup in picturesque St Petersburg.

Lenin was the founder of a newspaper called Iskra (the Spark), which was published in exile, from across Europe in 1900. Its first edition started from Leipzig in Germany, moved to Munich, then Geneva and London. Indeed, like a spark, the Russian Revolution sparked a "prairie fire" across the world and changed the political imagination of oppressed and "slave" nations suffering under colonial rule, especially in Asia, Africa, the Middle East and Latin America.

Indeed, in the Indian context, so influenced was Jawaharlal Nehru by the October Revolution, that his world-view changed. At one time he was called a "Bolshevik" in the Congress, even while Nehru spent many more years in prison than even Mahatma Gandhi. His passionate writings on the condition of the poor in India, often describing in cinematic detail their life and times, his strong abhorrence of communal, racist and hate politics, his modern, secular, mind, his letters to the chief minister after he became prime minister, his affinity towards the Soviet Union, his belief in the public sector and indigenous academic institutions of higher learning - they all stemmed from the progressive currents of the time influenced by the Russian Revolution. Surely, despite the American propaganda and its self-congratulatory movies of World War II, it was the Russians who finally conquered Berlin, even as Hitler committed suicide. More than 20 million Russians sacrificed their lives in the war, especially during the siege of Leningrad and Stalingrad by German forces.

While the entire world was following Lenin, the Hindu Mahasabha and the RSS, were glorifying the Holocaust and ethnic cleansing in Germany by Hitler. Did they have any contribution to the freedom movement? No.

They are stooges of the British, and Veer Savarkar's pathetic letters to the British empire, are testimony. All they did, as now, was indulge in hate politics. Targeting Muslims and other minorities.

And what was Bhagat Singh reading, moments before he was hanged? Lenin.

The BJP should see Rajkumar Santoshi's film, The Legend of Bhagat Singh. It is a reasonably authentic film. They should learn the fact that Bhagat Singh was a communist. Instead of listening to the boring rant in Mann Ki Baat, they should read, Why I am an Atheist by Bhagat Singh.

It was Lenin who changed the resolution drafted by communist leader MN Roy in the early 1920s, whereby he said that India is ripe for a "revolution". Instead, Lenin argued, and changed the resolution in his own handwriting. He said that the communist party was in its infancy, and they should join the struggle under the umbrella of the Congress because by fighting the colonial forces, it was a progressive force at that time.

Consequently, the communists joined the freedom movement with the Congress at the helm, and its students, peasants and trade union fronts became huge, spreading across the nation in the early 1930s. So much so, EMS Namboodiripad became the president of the Kerala Pradesh Congress Committee. Later, he became the first chief minister of the first elected communist government in the world in Kerala.

Lenin's statue in Belonia was ravaged as a grotesque public spectacle by a mob of BJP workers, apparently pegged on by its south district secretary Raju Nath, amid chanting of "Bharat Mata ki Jai". A JCB was organised by the party to topple the statue. As the statue fell, the head apparently broke away from the body. Hence, BJP workers happily played football with the head.

The grotesque spectacle reminds of the manner a motley crowd, backed by the American marines, and a sold out media celebrating "embedded journalism", dismantled the statue of Saddam Hussein in Baghdad during the occupation, amid the fake claim of Iraq possessing deadly WMDs - weapons of mass destruction. The dismantling led to the mass looting of the precious museum of Baghdad, which had preserved ancient memories of the "cradle of civilisation", killings of tens of thousands, and finally, a civil war which is still going on, followed by multiple genocides. It was all inspired by the American neo-cons, led by George Bush and Dick Cheney, inspired by the bogus "clash of civilisation" theory of Samuel Huntington. 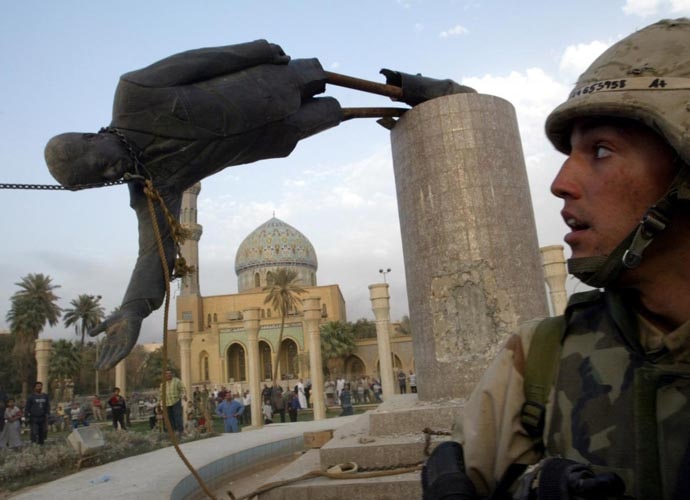 The statue of Saddam Hussein being brought down in Baghdad.

Raju Nath is brazen, like his governor. He argues that people hated the public meetings held near the statue, there was resentment, and why should a foreigner's statue be installed anyway in India? Surely, by that account, Alexander Pushkin's statue at the corner of Ferozshah Road near Mandi House in Delhi should be immediately beheaded. Surely, they can play football with the head at the roundabout for all cultures-vultures to enjoy.

More than 1,500 CPM offices have been attacked, vandalised or burnt, party workers have been beaten up, and a reign of terror has been unleashed by BJP-RSS workers across Tripura, allowed tacitly by the cops and civil administration, even while the would-be chief minister chose to touch Manik Sarkar's feet. Indeed, in this era of symbolism, for the Sangh Parivar and its hydra-headed octopus like formations, the line between the fringe and the mainstream often gets blurred. The fringe becomes the mainstream and the mainstream becomes the fringe.

For the mob-lynchers and cow vigilantes, openly affiliated to the Sangh Parivar, every act of violence, man slaughter, public lynching, organised barbarism, often recorded on video and showcased proudly, like the grotesque murder of Afrazul by a fanatic in Rajasamand in Rajasthan, democracy is as short, nasty and brutish, as fascism was for Hitler's Nazis. Witness Ram Madhav, top RSS leader, showcasing the video of the destruction of Lenin's statue - without comment. He could very well have written - RSVP: All Near and Dear.

It's a spiral and a viral. Even Narendra Modi can't control it, because he is the original role model of hate politics in India, cherished by the lumpens who are his bhakts. His eternal silence is a tacit recognition of the violence. BJP leader H Raja threatened that statues of the Dravidian icon in Taminadu, EVR Ramasamy, Periyar, would be pulled down on social medial. The statue of Periyar, located inside the Tirupattur corporation office, Vellore, was targeted and desecrated. The glasses and nose of the statue were damaged.

So, will it be Gandhi next? And should India install Nathuram Godse and Veer Savarkar's statues, both accused in Gandhi's assassination, all over in its main squares and around the clock towers, around cities and towns?

Babasaheb Ambedkar's statues have been desecrated in recent times all over India, especially, in the Hindi heartland, Small statues made with deep respect by poor Dalit communities, not so superbly sculpted, perhaps, in blue. Dressed in a blue coat with a tie and blue trousers, but, nevertheless, sculpted with raw law of Dalits for their leader. Since the BJP and RSS basically hate the Indian Constitution, despite the fake-feku rhetoric, Ambedkar, surely, is next on the target. 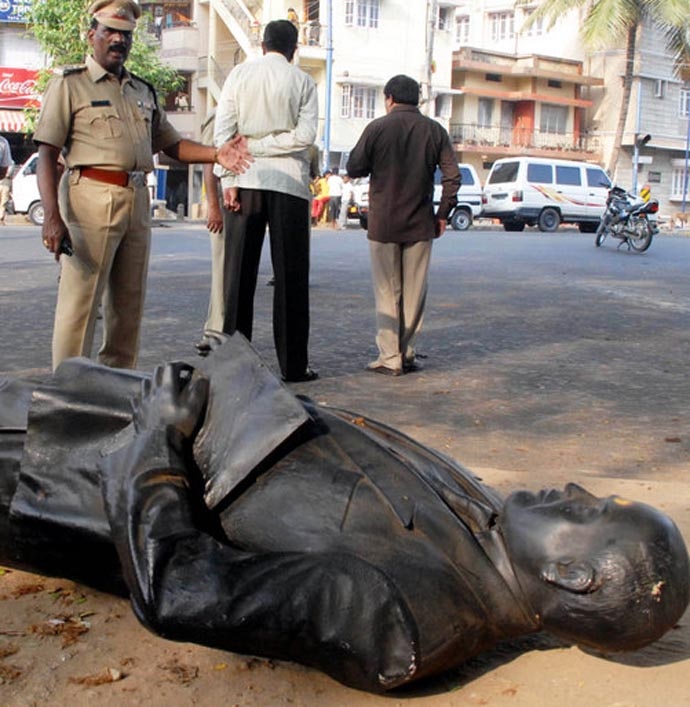 Babasaheb Ambedkar's statues have been desecrated in recent times all over India.

That will be a dark day in Indian democracy. But, how darker can it get?

Ideas can't be eliminated by killing human beings, destroying statues, burning books, or clamping down on universities and public dissent. They will resurrect like underground literature - as the "Samizdat" during Stalin's repressive regime in Russia. Now, historians are compiling scattered notes and literature from the concentration camps during the Holocaust. It took years, but the Turkish regime could not stop the documentation of the massacre of Armenians - by Orhan Pamuk. There are more than 45 meticulously documented reports on the Gujarat genocide, 2002, and several documentaries and media reports.

Sanjay Gandhi's lumpens could not stop the people from listening to the songs of Kishore Kumar, who was banned during Emergency, because he refused to sing in a Congress rally. Charlie Chaplin was branded a "communist" by the McCarthyists during the Cold War in America, who thought the entire Hollywood was hiding "reds under their beds". He went into exile, but they could not stop his "The Great Dictator", a great spoof on Hitler, as well as other classics. They banned Beethoven during the Cultural Revolution in China, but the students played it again, on a loudspeaker, at Tiananmen Square, Beijing, in June 1989, before the tanks came and crushed them.

The BJP is on a high. They have won Tripura, but got only two and 12 seats in Meghalaya and Nagaland, respectively. No big deal, this. They should rethink, that no "high" lasts eternally. When the hangover will hit them, and it will surely hit them too as historical inevitability, then they will realise that the statue they have destroyed in Tripura, might come back to haunt them one day. History repeats. And it could very well follow Lenin's famous doctrine: One step forward. Two steps back.