The Karmic Cycle: Did LK Advani's karma boomerang and lead to his sidelining in the BJP?

There are many who say that Advani’s was a

I asked Shatrughan Sinha last week, in the course of a TV interview, to explain why he had fallen out with Narendra Modi and the current leadership of the BJP — the party where Shatrughan had once been such a leading light. Sinha denied that it had to do with his resentment at not being made a minister (as the BJP had been leaking).

It was all about LK Advani, he said.

This generation of BJP leaders did not like Advani — so, anyone who was still close to Advani was treated badly.

Was it really that bad?

Yes, said Sinha. Advani was ignored and humiliated. Having given his whole life to the party, the former BJP President now found that the party he revived had no further use for him. He was merely a tiresome irrelevance — it had got so bad that Advani wept when he talked about his treatment at the hands of the BJP’s current leadership. Even before Sinha gave me this insiders’ perspective on Advani, I had already begun to feel sorry for him. Though we have always differed politically, I have known him personally since the 1980s and always found him to be a decent, unassuming man with no arrogance and no sense of megalomania — which is more than you can say for some of today’s political leaders.

When Narasimha Rao charged him in the hawala case, I wrote in his defence. I disagreed with pretty much everything he stood for, I said. But I believed that his integrity was beyond question and that the hawala charges would be thrown out by any court. They were.

So, because I have a certain personal regard for him, I feel very bad for Advani. There would probably be no BJP without him. After it had been reduced to two seats in the Lok Sabha in the 1985 election, it was Advani who revived the party and made it a contender again. It is sad to see him now, deserted by the flunkeys and time-servers who clung to him when he was in power, left alone to grieve by a party that has edited him out of its history.

And yet, the more I think about it, the less I see Advani’s fate as a personal tragedy and more as karma coming back to hit him smack in the middle of his ambition.

Yes, what’s happening to him is terrible. Yes, his party is ungrateful and needlessly obnoxious to him.

But no, he is not some hapless victim.

This version of the BJP is the monster that Advani nurtured.

This is the tsunami he unleashed. And if it has come back to destroy him, then, well, he has only himself to blame.

Though the old Jan Sangh had its share of Hindu bigots among the small shopkeepers that constituted its support base, the party always pretended to be economically right-wing and socially centrist. In 1977, when the Jan Sangh merged with the Janata Party, it played down any bigoted agenda its members may have had. And in 1980, when it emerged again out of the wreckage of the Janata Party, it called itself the Bhartiya Janata Party (not the Jan Sangh) because it wanted to inherit the centrist position that Janata had occupied. 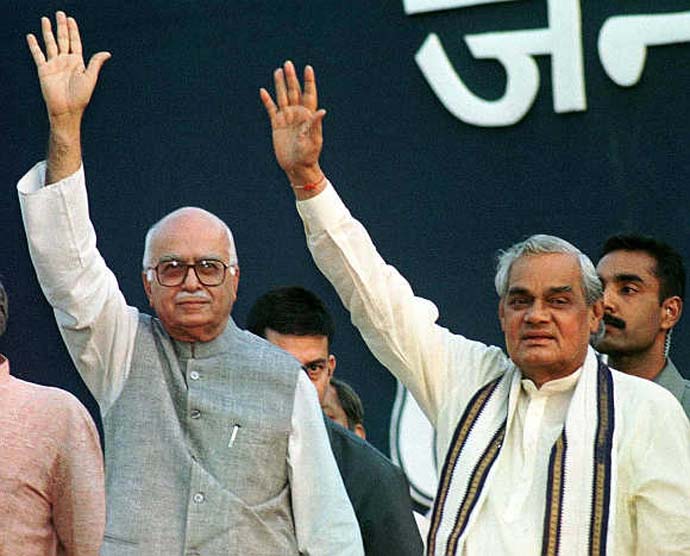 Partnership goals: Vajpayee and Advani. The former was overruled by the RSS. The latter was the Sangh’s chosen man. (File photo: Reuters)

It might have succeeded — but for the Rajiv wave of 1984-1985 which wiped out the entire opposition. One solution, advocated by AB Vajpayee, who had led the new party since its inception, was to wait till the public grew disillusioned with Rajiv Gandhi and to then re-emerge as the centrist alternative.

But Vajpayee was overruled by the RSS (which never liked him anyway) and the leadership passed into Advani’s hands.

Pretty much the first thing Advani did as the leader was to junk the centrist positioning and to make a direct appeal to the bigots in the party. Whereas once both the Jan Sangh and the BJP had sought to distance themselves from the nutcases, Advani rushed off to embrace them. It was under Advani that the idea of a Sangh Parivar, comprising not just the BJP but every fringe group, from the VHP to the Bajrang Dal, gained ground. The RSS came to be seen as the final authority and BJP leaders routinely flew to Nagpur to seek instructions from their political bosses.

What followed was inevitable.

The BJP and Jana Sangh had always taken pro-Hindu stands on such issues as cow slaughter but these issues had never become the centrepiece of their appeal. Under Advani, however, the BJP now made such issues its raison d'etre. It feigned concern for divorced Muslim women and set out to rid India of the so-called scourge of Muslim polygamy (though surveys suggested that relatively few Muslims could afford more than one wife). Every issue was seen in 'Hindu-Muslim' terms.

Hindus were told they had become second class citizens in their own country. Anyone who believed in a pluralistic India was a ‘pseudo-secularist’ (the term ‘sickular’ had not yet caught on), Muslims, one of India’s poorest groups, were a ‘pampered minority’, and pop religion was brought into everything. There had long been a tradition identifying a particular spot as the birthplace of Lord Ram. But other places have also been identified as his birthplace and the vast majority of India's Hindus were not aware of the special significance of any one piece of land.

But one particular purported Ramjanmabhoomi suited the Sangh Parivar best because a mosque had been built on the spot.

The mosque had been the centre of a dispute between Hindus and Muslims for decades, but the issue had not made much impact outside of that part of UP.

Under Advani, who hijacked the agitation from the VHP, the Babri Masjid dispute became the central issue of Indian politics. It was a measure of the subjugation of Hindus, he said, that their most sacred spot was now the site of a mosque built by Muslim invaders.

Was it really the most sacred spot in Hinduism? Had Lord Ram actually been born there? It did not matter, responded Advani. As long as Hindus believed he had been born there, that was enough.

Did Hindus really believe that? Had they even heard of this site? Well, Advani made it his mission to make sure that every Hindu soon heard about Ram Janmabhoomi

The historian Ram Guha calls Advani’s decision to focus on Hindu-Muslim divisions the most venal act in recent Indian politics — there was, he says, no provocation and there were no special circumstances. (Guha gives the example of the 2002 Gujarat riots where, he argues, it could be said of Narendra Modi that he was facing unprecedented public anger over the Godhra massacre and so could be absolved of some of the blame)

Advani concentrated on this issue and divided communities only as part of a search for political power.

To further create tensions, Advani went off on a Rath Yatra (complete with an actor dressed as Ram) to focus on the injustice done to Hindus. Everywhere he went, tensions grew and often, riots followed — to the extent that the Rath Yatra was soon called the Riot Yatra.

If we complain now about the communal poison that has been injected into our system, then we need to look no further back than to the era of Advani, who gleefully held the syringe as the injection was being administered. The demolition of secularism: The Babri Masjid being vandalised in 1992. (File photo: Reuters)

Later, when a mob destroyed the Babri Masjid in front of Advani, he said he was devastated. He wrote a two-part newspaper article on December 27 and 28, 1992, about the demolition, calling it "the saddest day of my life".

"It was the saddest day in my life. I have seldom felt as dejected and downcast as I felt on that day."

But if you read the article closely, it soon became clear that the only aspects of this act of historical vandalism that perturbed him were that the BJP had lost its reputation for discipline and that his pet issue had been demolished.

There are those who say that Advani’s was a gentler kind of communalism (as though there is such a thing) and that he is appalled by what the BJP has now become.

Advani had a chance to move to the political centre during the 2002 Gujarat riots. Such was the public outcry that AB Vajpayee had made up his mind to apparently remove  Narendra Modi as Chief Minister. He was prevented from doing so by LK Advani, who led a revolt of ministers (including Pramod Mahajan and Arun Jaitley) and spoke up in defence of Modi. In doing so, he saved Modi and continued to lay the foundations of today’s BJP.

So, when people say that politics has sunk to a new low, that elections are being fought on Hindu-Muslims divisions and not developmental issues, never forget that it was Advani who began this trend, who created and exploited a sense of grievance among Hindus, and who helped cement the perception of Muslims as The Other.

There is very little happening in the BJP today that cannot be traced back to Advani.

It is not my case that Advani was wrong to say or do any of these things. Unlike Ram Guha, I am not calling Advani venal. All I say is this — everything communal in our polity that we condemn today leads back to Advani. The only difference between Modi’s BJP and the party that Advani created is that Modi won a parliamentary majority — while Advani could never win a General Election.

So, when I find myself feeling sorry for Advani at a personal level, as I often do, I stop and remind myself of inescapable truth.

If you cultivate snakes, don’t be too surprised when the new generation gives you a dose of your own poison.