Lok Sabha 2019: Like a phoenix, Jaya Prada returns as a BJP candidate

Born as Lalitha Rani in a middle-class household in Rajahmundry in undivided Andhra, Jaya Prada is perhaps the only film star from southern cinema to make a deep mark not only in Hindi cinema but in politics too.

Her career span of over four decades has over 300 films in eight different languages. She scores over other female actors-turned-parliamentarians — like Jaya Bachchan and Rekha — on another account too. In 16 years, Jaya Prada has won two back-to-back Lok Sabha polls (2004 and 2014) from the Hindi heartland of Rampur. She also served one full term in the Rajya Sabha from 1996-2002. It was only after losing the 2014 Lok Sabha polls, that the actor began focussing on her first love — facing the camera.

Lo and behold, she is back in 2019 as a BJP candidate from Rampur Lok Sabha.

Jaya had been quite vocal about the issue of 2002 communal riots in Gujarat when the Telugu Desam Party (TDP) was part of the NDA government backing the Narendra Modi government of Gujarat. "I was very upset during the Gujarat riots as the TDP’s reaction to the situation was not convincing," she had told voters flaunting her secular credentials as a Samajwadi Party nominee in 2004. "When I saw through the TDP's gameplan, I decided enough is enough," Jaya said about being elected in Rampur, adding that for her, there could be no room for compromising one's self-respect or on the issue of secularism. Jaya kept saying that for artistes like her, the whole country was their stage. "If Congress president Sonia Gandhi could contest from Bellary (in Karnataka in 1999), what prevents me from being a candidate in Rampur?" she asked. 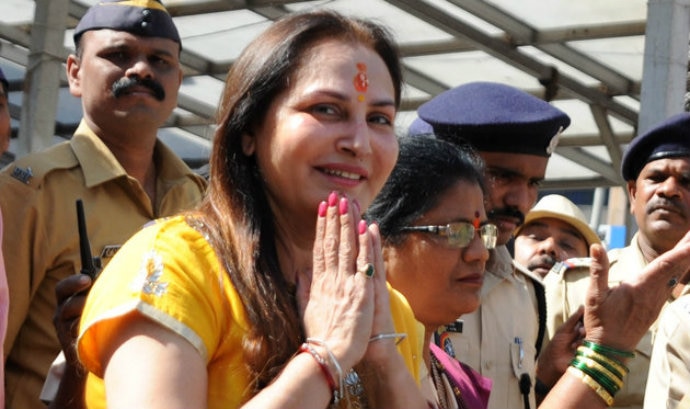 Jaya Prada was 14 when she got a chance to dance for barely three minutes in the Telugu movie Bhoomi Kosam (1974), for which she was paid the fine sum of Rs 10! The actress has not looked back ever since.

When asked what prompted her to enter politics, Jaya replied with a straight face, "Madness." A single call from NT Rama Rao made her jump into politics. "He wanted to become the Chief Minister then. We became a successful pair on screen. He became my leader, my mentor who brought me to politics." Speaking in front of almost a million audience was not easy for Jaya. "It was a transformation of a woman inside-out," she said, adding, "Lord Almighty has made me totally bold now. I hardly used to speak. Now I can talk for hours before the public."

The suave and soft-spoken actor who had joined NT Rama Rao’s TDP in 1994, saw many shades of politics. When the TDP founder and legendary actor invited her to enter politics, the duo had done five Telugu films together. Jaya rose quickly in the TDP ranks. At the time of joining politics, there was speculation that she would contest the polls but she preferred not to make her electoral debut although she was offered a seat by NTR. Jaya campaigned in several constituencies in 1994 assembly polls of Andhra Pradesh where NTR’s party trounced the Congress, headed by the then Telugu-speaking Prime Minister, P.V. Narasimha Rao.

When NTR became the Chief Minister of Andhra Pradesh, Jaya Prada became a family friend coming in contact with NTR's son-in-law and the then finance minister N Chandrababu Naidu. NTR’s health deteriorated and it is saud a coup against the party patriarch was apparently plotted by Naidu in September 1995. The actress quickly switched side to be with Naidu. As a thank you note apparently, Naidu made her one of the influential party secretaries. A year later, she was fielded for the Rajya Sabha biennial elections from Andhra Pradesh for a six-year term.

Soon, Jaya’s alleged proximity to Chandrababu Naidu became a talking point in Hyderabad, leading to speculation that the chief minister wanted Jaya to be inducted into the United Front Government of HD Deve Gowda after the 1996 election. When Inder Kumar Gujral became the second UF Prime Minister, he inducted Renuka Chowdhary — another ambitious and fiery woman politician from the TDP into the Gujral cabinet in 1997. As part of the truce, Naidu appointed Jaya as the chairperson of the Telugu Mahila (the women's wing of the party). This led to more resentment. Women in TDP openly questioned Naidu’s decision pointing out that Jaya had no organisational skill. 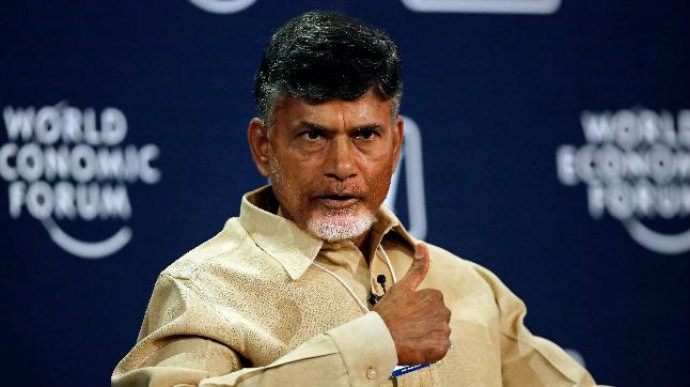 From friend to foe? Chandrababu Naidu's dynamics with Jaya Prada have been consistently stormy. (Source: Reuters)

Chowdhary and Jaya Prada continue to be embroiled in controversies. Hostilities broke out again when Renuka was not renominated to the Rajya Sabha for the third time in March 1998. The party also did not oblige her when she wanted to contest Lok Sabha elections from Rajahmundry or any other constituency in coastal Andhra. Chowdhary suspected Jaya Prada had to do something in the denial of her Rajya Sabha nomination. She finally quit the TDP and joined the Congress, leaving the field open for Jaya Prada, who was considered close to Naidu and had a great deal of influence. In the campaigns of 1996 and 1998 Lok Sabha elections, Jaya drew bigger crowds than Naidu, dispelling an impression that she was merely a glamour doll. Jaya was reportedly responsible for influencing Naidu to field about 40 or so women candidates in 1999 assembly polls — the highest number sponsored by a ruling party till then.

In 2002, however, she was denied a second term in the Upper House and was replaced by actor Roja as TDP’s Mahila president. A miffed Jayaprada distanced herself from the TDP and moved to Uttar Pradesh to join the Samajwadi Party and with politician Amar Singh's backing, she was elected to the Lok Sabha from Rampur in 2004 and 2009.

Jaya joined the Samajwadi Party on March 9, 2004, in Lucknow at the party headquarters attended by 6,000 overawed village-level workers, Jaya Prada said she was drawn by the secular credentials of Mulayam Singh and general secretary, Amar Singh. The actor added that she would be happy to be an ordinary worker and not hanker after any post. Explaining her shift from Andhra Pradesh to Uttar Pradesh, Jaya Prada said, "I think Uttar Pradesh is the soul of India. If the state does not prosper, the country cannot reach anywhere. So I have opted for this state as my field of activity," adding, "Industrialists used to crowd around Chandrababu Naidu but now they are hovering over Netaji (Mulayam Singh)."

Initially, the switch from South to North was swift. In 2004 Lok Sabha polls, Jaya Prada stunned Begum of Rampur, Noor Bano alias Mehtab Zamani Begum by winning over 85,000 votes. From the beginning, Jaya did behave like a celebrity in her new-found 'karam bhoomi' of Uttar Pradesh. "I am Rampur ki kali," Jaya declared and began her campaign, rejecting the charge of being a political paratrooper in the land of hardboiled politicians. She exhibited a resolve to carve out her own place in the voters' hearts by riding on the developmental wave. In her election speeches, she said, "Mujhe maloom hai ki Rampur wale behen aur beti ko khali haath nahi bhejte. Isliye mujhe vote bhi milenge aur dil bhi (I know the people of Rampur do not send their daughters and sisters back with empty hands. So I will win over both their hearts and votes)." Soon the 'outsider' tag was off and the predominantly Muslim constituency cheered for her. 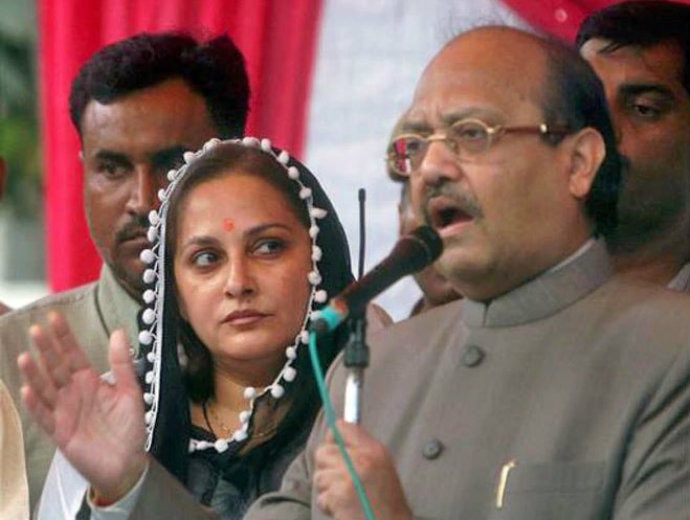 Jaya Prada was looked at as a pawn in the Amar Singh game. (Source: IndiaToday.in)

Jaya’s friend-philosopher-guide Amar Singh was the celebrity-networked man-about-town, who for years, remained the most sought after politician in Delhi. He was also known for his connections in American politics, particularly with the Clintons. Peter Schweizer (writer, political consultant, in his 2015 book, Clinton Cash), devoted an entire chapter titled ‘Indian Nukes – How to win a medal by changing Hillary’s mind’ to this phenomenon, chronicling Amar’s clout and influence in American politics.

With such formidable connections, Amar’s rise in the Samajwadi Party was resented by Azam Khan, a powerful Muslim leader and founder member of the Samajwadi Party and 2019 Mahagathbandan’s candidate from Rampur. For Azam and his camp, Jaya Prada was a pawn in the Amar Singh game. Each time Jaya failed to pay her political dues to Azam Khan, the local Samajwadi party boss-cum-minder, got personal. Jaya won from Rampur again in 2009 in spite of Khan describing her as 'nautch girl.' When Jaya filed her nomination papers as an SP candidate in Rampur, Khan did not attend the rally despite being in Rampur. Amar brought in Abu Asim Azmi, the party’s Maharashtra unit chief to woo the Muslim voters. This move outraged Khan further. Throughout the 2009 election campaigns, Amar chose to target Azam. At election rallies, he was heard saying, "When trees are laden with fruits, they tend to bend over. But this should not be mistaken as a sign of weakness,” he said, adding, “I have been called a dalal (broker), Jaya Prada has been called a rakkasa (nautch girl). We have ignored it... but there’s a limit." Amar took the opportunity to get even with Azam’s allegation that he had converted the SP into a 'filmi party.'

When Amar Singh was in jail, Jaya Prada was one of his few friends who stood by him and lamented that almost all who had got favours from the politician had deserted him. "He (Amar) supported Amitabh Bachchan when he was in a crisis but Bachchan is not standing by him," she said.

For Jaya, politics has kept her busy for a long time. "I enjoyed my experience and learnt a lot. Producers from the South offered me films at that time because they believed I would fulfil my commitments. I’ve been more or less away from politics for the past five years, so I can devote more time to (Hindi) films. I am jobless," Jaya had said shortly after losing 2014 parliamentary polls. Sensing the presence of a substantial number of Muslims, Jaya played her role well. (Source: PTI)

Jaya Prada has proven to be as much an effective campaigner in the Hindi heartland as she was in Andhra. This was evident the way she started campaigning at 7 am at Raipur village in Bijnore where an impressive crowd of youngsters and women had gathered to hear her speak as the Rashtriya Lok Dal candidate in 2014. This was the first time that she was contesting under the banner of a smaller party after quitting Uttar Pradesh’s ruling Samajwadi Party. Jaya arrived in a Toyota Fortuner, dressed in a cream-coloured salwar-kameez. Short of time, she stood on the footrest of the car’s door and quickly introduced herself, "Main Jaya Prada aapke beech vote maangne aayee hoon. Kisano ki ladai ladne aayee hoon, Choudhary Charan Singh ka sapna poora karna hai (I, Jaya Prada, have come seeking your votes. I will fight for the cause of farmers. I want to fulfil the dreams of Choudhary Charan Singh)." Jaya immediately struck a chord with voters, though it was her main rival BJP’s Bhartendra Singh — charged with hate speech during Muzaffarnagar riots — who was ultimately the winner. Sensing the presence of a substantial number of Muslims, she also recited a few Urdu couplets, "Aina saamne ho to tasveer nazar aati hai, Meri tadbir mein meri taqdir nazar aati hai (My destiny is reflected in the reality of the present)," she said assuring voters that she would stay in Bijnore after winning the election.

Renowned Bengali film director, the late Satyajit Ray had once described Jaya Prada as one of the prettiest women in the world while expressing a desire to cast her in his film. To date, Jaya thinks it was the best compliment she has ever received, and perhaps that’s one reason why she finds herself back where she belonged, "Every politician goes through a lean patch during which they go back to their main area of expertise. Some return to business, some practise law, and I have come back to cinema,” she had remarked in 2014.

But a phoenix, she has made another comeback in politics, now as a BJP leader.