Pulwama Blast, Tiny Turn-Out: Its name has been on every neta's lips. Yet, Pulwama saw no festival of democracy today

Pulwama, Ground Zero of the February 14 suicide attack in which over 40 soldiers died, goes to the polls today. But this is marked by an eerie silence, not the good cheer of voting crowds.

It is the district that has seen the worst terror attack that left India thoroughly shaken. Pulwama has been mentioned the most in the past two months as the political bigwigs campaigned across the country, promising to avenge the dastardly attack that took place on February 14.

However, Pulwama itself has hardly seen any election campaigning by political parties. As its polls even today are marred by incidents of violence, Pulwama is a pale shadow of its moniker — Anand (delight) of Kashmir.

Known for its congenial climate, innumerable springs and waterfalls, Pulwama’s tragic claim to fame this year came from the horrific attack by a JeM suicide bomber, who rammed his explosives-laden car into a CRPF convoy on February 14, killing over 40 paramilitary troopers.

Even as media reports predicted an abysmal turnout in the polls — senior police officials reportedly said the voting may not even cross a double-digit mark — an explosion was reported near a polling station at Rahmoo village in Pulwama. As per reports, no one was injured in the grenade attack. 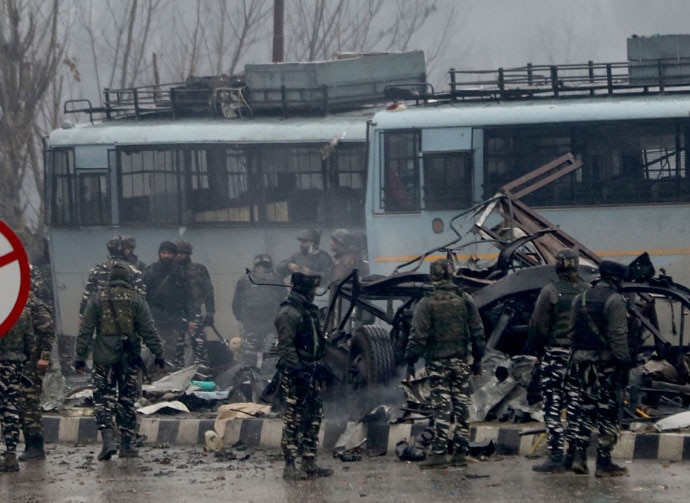 After the dastardly attack on CRPF jawans on February 14, the Pulwama district has barely seen any electioneering. (File Photo: ANI

However, the situation in Pulwama remains as tense as the wary electorate.

In fact, no turnout for voting could very well be the reason why there were no casualties after the grenade attack on the polling booth.

According to reports, a little over one per cent polling was recorded during the first four hours (till 11 AM) in both the south Kashmir districts — Pulwama and Shopian — despite unprecedented security arrangements following a strike called by separatists. According to a poll official, only one per cent of the electorate has exercised their franchise in Pulwama while 1.28 per cent polling was recorded in Shopian till 11 AM.

Many polling booths in the twin districts were yet to receive the first voter during the first few hours of polling.

Earlier, Gulzar Wani, a grocery store owner, who was greatly agitated when asked about the prospects of voting, had reportedly said, “I don't think that there will be any voting in this area. The machines may return untouched.”

There hardly seemed any semblance to the colourful campaigning atmosphere that enveloped the rest of the country.

The National Conference and the Congress confined their political activities to their party offices. The Peoples' Democratic Party (PDP), which has a strong base in south Kashmir, was almost missing. Party candidate Mehbooba Mufti preferred to stay away from canvassing. No wall, street or building is festooned with colourful flags and banners of the parties.

Pulwama district has 3.51 lakh eligible voters. For smooth polling, the Election Commission set up 450 polling stations across the district. The elections to Anantnag Parliamentary seat was divided into three phases. Earlier, the constituency voted on April 23, in which 12.8% votes were cast. This was followed by the second phase in Kulgam on April 29, which recorded around 10% voting.

Pulwama itself could make a new record with its abysmal turn-out. Even as the rest of the country celebrates democracy, the area remains shrouded in an eerie silence — one that even the hyperbole of Kashmir's politicians have been unable to convert.